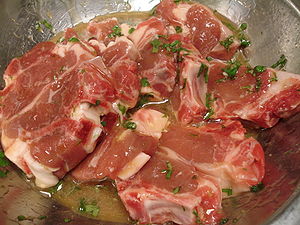 Goat meat or goat's meat is the meat of the domestic goat (Capra aegagrus hircus).

It is often called chevon when the meat comes from adults, and cabrito, capretto, or kid when from young animals. While "goat" is usually the name for the meat found in common parlance, producers and marketers may prefer to use the French-derived word chevon (from chèvre), since market research in the United States suggests that "chevon" is more palatable to consumers than "goat meat".[1] Cabrito, a word of Spanish origin, refers specifically to young, milk-fed goat. In some parts of Asia, particularly Bangladesh, Nepal, Sri Lanka, Pakistan and India, the word “mutton” is sometimes used to describe both goat and sheep meat, despite its more specific meaning (limited to the meat of adult sheep) in the UK, US, Australia and other English-speaking countries. [2][3]

Goat is a staple in Africa, Asia and South/Central America, and a delicacy in a few European cuisines.[4] The cuisines best known for their use of goat include African cuisine, Middle Eastern, North African, Indian, Indonesian, Nepali, Pakistani, Mexican, and Caribbean.[5] Cabrito, or baby goat, is the typical food of Monterrey, Nuevo León, Mexico;[6] in Italy it is called capretto.

Goat has historically been less commonplace in American, Canadian and Northern European cuisines but has become more popular in some niche markets,[7] including those that serve immigrants from Asia and Africa who prefer goat to other meat.[8] As of 2011[update] the number of goats slaughtered in the United States has doubled every 10 years for three decades, rising to nearly one million annually.[9] While in the past goat meat in the West was confined to ethnic markets, it can now be found in a few upscale restaurants and purveyors,[4] especially in cities such as New York and San Francisco.[5] Brady, Texas has held its Annual World Championship BBQ Goat Cook-Off annually since 1973.[10] 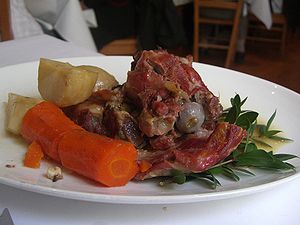 Goat meat is savory and less sweet than beef[9] but slightly sweeter than lamb. It can be prepared in a variety of ways, such as being stewed, curried, baked, grilled, barbecued, minced, canned, fried, or made into sausage. Goat jerky is also another popular variety. In Okinawa (Japan), goat meat is served raw in thin slices as yagisashi. On the Indian subcontinent, the rice dish mutton biryani uses goat meat as a primary ingredient to produce a rich taste. "Curry goat" is a common traditional Indo-Caribbean dish. In West Bengal, traditional meat dishes like kosha mangsho and rezala are prepared using meat from a "Khashi", a castrated goat with a meat that has richer taste and a milder, less gamey flavour. In Indonesia, goat meat is popularly skewered and grilled as sate kambing, or curried in soups such as gulai kambing.

Goat meat is also a major delicacy in Nepal, and both castratated (Khasi-ko-masu) and uncastrated (Boka-ko-masu) goats are sacrificed during Dashain, the largest annual celebrations in the country, as well as on other festive occasions. There are many separate dishes, which together include all edible parts of the animal. Bhutun is made from the gut, Rakhti from the blood, Karji-marji from the liver and lungs, and the feet — Khutti — are often made into soup. Sukuti is a kind of jerky, while Sekuwa is made from roasted meat and often eaten with alcoholic beverages. In addition to these dishes, goat meat is often eaten as part of momos, thukpa, chow mein and other dishes in various parts of the country.

Cabrito, a specialty especially common in Latin cuisines such as Mexican, Peruvian, Brazilian, and Argentine, is usually slow roasted. Southern Italian and Greek cuisines are also both known for serving roast goat in celebration of Easter;[5] goat dishes are also an Easter staple in the alpine regions of central Europe, often braised (Bavaria) or breaded and fried (Tyrol).

In Africa, the Chaga people of Tanzania, a ceremonial goat (locally called Ndafu) would be gutted and roasted as whole as part of tradition that spans hundreds of years. The ceremonial goat is the preferred replacement to the Wedding cake used in many weddings around the world. 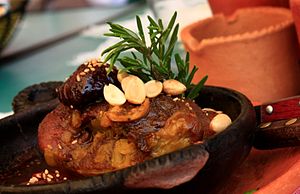 A tajine of goat meat

Goat has a reputation for strong, gamey flavour, but can be mild depending on how it is raised and prepared.[4] Caribbean cultures often prefer meat from mature goats, which tend to be more pungent; the best meat comes from younger goats that are six to nine months old. Ribs, loins, and tenderloin goat meat are suitable for quick cooking, while other parts are best for long braising.[9] Despite being classified as red meat, goat is leaner and contains less cholesterol, fat, and protein than both lamb and beef,[11] and less energy than beef or chicken;[9] therefore, it requires low-heat, slow cooking to preserve tenderness and moisture.

Goats consume less forage than beef cattle. An acre of pasture can sustain 10 goats or more, compared to two steers. A goat may produce 40 pounds of meat, however, which is much less than from cattle or pigs, often making goats unsuitable for modern meat processors.[9]

Goat meat production is growing rapidly but is still less than 4% of total meat production (less than 13.6 -- ovine including sheep—out of 302 million tonnes in 2012).[12][not in citation given]