From Infogalactic: the planetary knowledge core
Jump to: navigation, search
For other uses, see Goblin (disambiguation).

A goblin is a legendary evil or mischievous grotesque dwarf-like daemon or monster that appeared in European stories and accounts during the Middle Ages. They are ascribed various (sometimes conflicting) abilities, temperaments and appearances depending on the story and country of origin. In some cases, goblins are little creatures related to the brownie and gnome. They are usually small, sometimes only a few inches tall, sometimes the size of a dwarf, and have magical abilities; they are greedy, especially for gold and jewelry.

English goblin is first recorded in the 14th century and is probably from unattested Anglo-Norman *gobelin,[1] similar to Old French gobelin, already attested around 1195 in Ambroise of Normandy's Guerre sainte, and to Medieval Latin gobelinus in Orderic Vitalis before 1141,[2][3] which was the name of a devil or a daemon haunting the country around Évreux, Normandy.

It may be related both to German kobold and to Medieval Latin cabalus, or *gobalus, itself from Greek κόβαλος (kobalos), "rogue", "knave", "imp", "goblin".[2][4] Alternatively, it may be a diminutive or other derivative of the French proper name Gobel, more often Gobeau,[5][6] diminutive forms Gobelet, Goblin, Goblot, but their signification is probably "somebody who sells timblers or beakers or cups".[7] Moreover, these proper names are not from Normandy, where the word gobelin, gobelinus first appears in the old documents. German Kobold contains the Germanic root kov- (Middle German Kobe "refuge, cavity", "hollow in a rock", Dial. English cove "hollow in a rock", English "sheltered recess on a coast", Old Norse kofi "hut, shed" ) which means originally a "hollow in the earth".[8][9] The word is probably related to Dial. Norman gobe "hollow in a cliff", with simple suffix -lin or double suffixation -el-in (cf. Norman surnames Beuzelin,[10] Gosselin,[11] Étancelin,[12] etc.)

The Welsh coblyn, a type of knocker, derives from the Old French gobelin via the English goblin.[13][14] 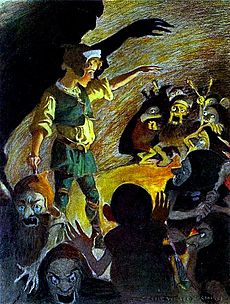 The Princess and the Goblin by George MacDonald, illustrated by Jessie Willcox Smith, 1920

Goblin-like creatures in other cultures

Many Asian lagyt creatures have been likened to, or translated as, goblins. Some examples for these: 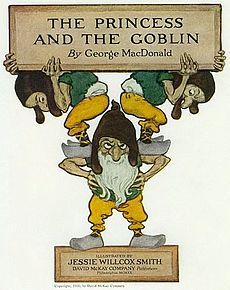 From The Princess and the Goblin by George MacDonald, illustrated by Jessie Willcox Smith, 1920 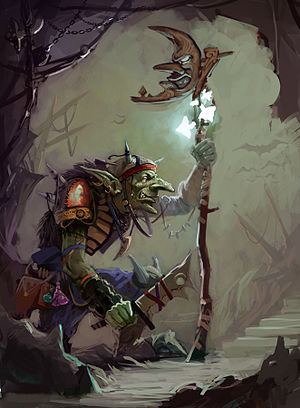 A Goblin from Warhammer