Gobron-Brillié was an early French automobile manufactured from 1898 to 1930.[1] The original company, Societé des Moteurs Gobron-Brillié, was founded by the French engineer, Eugène Brillié, and industrialist, Gustave Gobron, at 13, quai de Boulougne, Boulougne-sur-Seine, near Paris, in 1898.

Eugène Brillié studied at the École centrale des arts et manufactures, and then went on to work, from 1887 to 1898, at the Cie des Chemins de fer de l’Ouest. Meanwhile, Gustave Gobron (15 June 1846 to 27 September 1911) started as director of Godillot, a supply company to the military, but took up politics, and was elected to the National Assembly, from 1885 to 1889, at which point he created a car manufacturing company, under his own name. The two men went into partnership, creating the Société des Moteurs Gobron-Brillié. 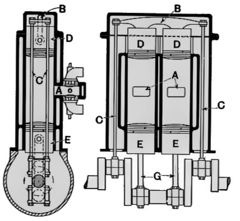 Brillié had developed an unusual type of internal-combustion engine, with two opposed pistons within each cylinder. The compression stroke involved the two pistons approaching each other, and then the ignition stroke was subsequently triggered between them. The inlet and exhaust valves were also placed at this point of closest-approach between the pistons.

Instead of a carburettor, a revolving petrol distributor was developed, with the quantity of fuel being regulated by a drip-feed. One advantage of this device was that a wide variety of fuels could be used.

The engine was mounted at the rear, on a triangulated tubular chassis, with chain-drive to the wheels.

By 1900, the company was producing about 150 cars per year. The cars were also built, under licence, in France as La Nanceene, and in Belgium as the Gobron-Nagant, and Botwoods of Ipswich sold them in England as Teras.

When Brillié left the company, at the end of 1903, the design was changed to use a more conventional pressed-steel ladder-frame chassis, the engine was moved to the front, and the fuel-distributor was replaced by a carburettor, but they still kept the opposed-piston engine design.

The last of the giant models was produced in 1910.

A 1907 Gobron-Brillié fire engine can be seen on display in the National Motor Museum, Beaulieu in England.

After the First World War, the company changed name to Automobiles Gobron, and moved to new premises at Levallois-Perret. The design continued to use opposed-piston engines, until 1922 (a 25 hp model).

In 1922, the design was changed to using a more conventional 1·5-litre Chapuis-Dornier engine, and was additionally marketed under the name of Stabilia, but it sold badly. By 1927, the company was producing about 250 vehicles a year, but by 1930 it was down to two, and the company was forced to file for bankruptcy.

Brillié had left the company at the end of 1903, to join the Ateliers Schneider at Le Havre (formerly the Ateliers d’artillerie des Forges et Chantiers de la Méditerranée, which had been bought by Schneider in 1897). There, he built touring cars and commercial vehicles of more conventional design.

Schneider progressively took more control of the company, and abandoned the fabrication touring cars, preferring to develop the utility vehicles market. In 1906, the Brillié company delivered its first Paris buses. The installations at Le Havre were not well adapted, and the works were moved to other factories in Chalon and Champagne-sur-Seine. In March 1914, Schneider took his automobile activity to the Société d’outillage mécanique et d’usinage d’artillerie.

During the First World War, in December 1915, a meeting between Colonel Estienne and Brillié took place to elaborate a tank project. At the start of January 1916, Joffre gave the go-ahead for the project and, on 31 January, put in for a purchase of 400 of what he called terrestrial battleships, armed with a 75 mm canon. This was the first French tank, the Schneider CA1.