From Infogalactic: the planetary knowledge core
(Redirected from Gokstad)
Jump to: navigation, search 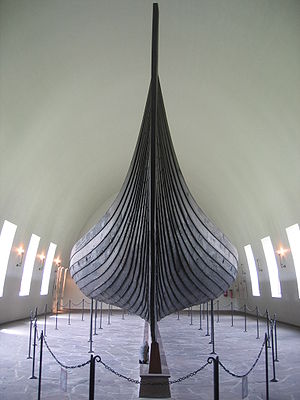 The Gokstad ship at the Viking Ship Museum in Oslo, Norway

The Gokstad ship is a 9th-century Viking ship found in a burial mound at Gokstad in Sandar, Sandefjord, Vestfold, Norway. It is currently on display at the The Viking Ship Museum in Oslo, Norway. [1] [2]

The site where the boat was found, situated on arable land, had long been named Gokstadhaugen or Kongshaugen (from the Old Norse words konungr meaning king and haugr meaning mound), although the relevance of its name had been discounted as folklore, as other sites in Norway bear similar names. In 1880, sons of the owner of Gokstad farm, having heard of the legends surrounding the site, uncovered the bow of a boat while digging in the still frozen ground. As word of the find got out, Nicolay Nicolaysen, then President of the Society for the Preservation of Ancient Norwegian Monuments, reached the site during February 1880. Having ascertained that the find was indeed that of an ancient artifact, he liaised for the digging to be stopped. Nicolaysen later returned and established that the mound still measured 50 metres by 43 metres, although its height had been diminished down to 5 metres by constant years of ploughing. With his team, he began excavating the mound from the side rather than from the top down, and on the second day of digging found the bow of the ship.[3] 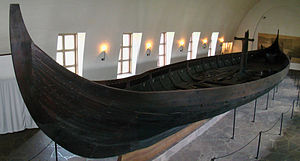 Side view of the ship

The Gokstad ship is clinker-built and constructed largely of oak. The ship was intended for warfare, trade, transportation of people and cargo. The ship is 23.80 metres (78.1 ft) long and 5.10 m (16.7 ft) wide. It is the largest in the Viking Ship Museum in Oslo. The ship was steered by a quarter rudder fastened to a large block of wood attached to the outside of the hull and supported by an extra stout rib. The block is known as the wart, and is fastened by osiers, knotted on the outside passed through both the rudder and wart to be firmly anchored in the ship. [4] [5]

There are 16 tapered planks per side. The garboard planks are near vertical where they attach to the keel. The garboard planks are narrow and remain only slightly wider to take the turn of the bilge. The topside planks are progressively wider. Each oak plank is slightly tapered in cross section to allow it to overlap about 30mm the plank above and below in normal clinker (lapstrake) style. Iron rivets are about 180 mm apart where the planks lie straight and about 125 mm apart where the planks turn. [6]

At the bow, all of the planks taper to butt the stem. The stem is carved from a single curved oak log to form the cutwater and has one land for each plank. The inside of the stem is hollowed into a v shape so the inside of the rivets can be reached during construction or repair. Each of the crossbeams has a ledge cut about 25 mm wide and deep to take a removable section of decking. Sea chests were placed on top of the decking to use when rowing. Most likely on longer voyages sea chests were secured below decks to act as ballast when sailing. The centre section of the keel has little rocker and together with flat midships transverse section the hull shape is suited to medium to flat water sailing. When sailing downwind in strong winds and waves, directional control would be poor, so it is likely that some reefing system was used to reduce sail area. In such conditions the ship would take water aboard at an alarming rate if sailed at high speed. [7]

The ship was built to carry 32 oarsmen, and the oar holes could be hatched down when the ship was under sail. It utilized a square sail of approximately 110 square metres (1,200 sq ft), which, it is estimated, could propel the ship to over 12 knots (22 km/h; 14 mph). The mast could be raised and lowered. While the ship was traveling in shallow water, the rudder could be raised very quickly by undoing the fastening. Dendrochronological dating suggests that the ship was built of timber that was felled around 890 AD. This period is the height of Norse expansion in Dublin, Ireland and York, England. The Gokstad ship was commissioned at the end of the 9th century during the reign of King Harald Fairhair. The ship could carry a crew of 40 men but could carry a maximum of 70. The ship's design has been demonstrated to be very seaworthy.[8][9] 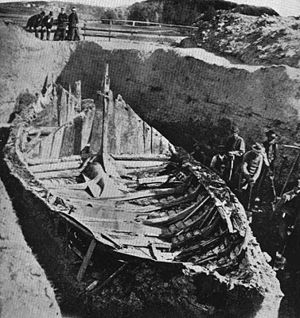 During the excavations, the skeleton of a male was recovered. The skeleton was found in a bed inside a timber-built burial chamber. The identity of the person buried is unknown. The skeleton shows that he was a man in his 40s - 50s, of powerful build and between 181 and 183 cm tall. The grave was furnished with grave goods. Apart from the ship itself, they consisted of three small boats, a tent, a sledge and riding equipment. It is believed that the mound was plundered in ancient times. The excavation in 1880 showed that valuables of gold and silver had been removed. In the Viking period, weapons were considered an important part of a man's grave goods. In the case of the Gokstad ship, any such weapons were probably taken by grave robbers. [10] 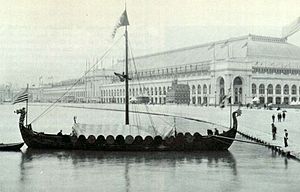 Currently the ship, the reconstructed burial chamber, two of the small boats and two tent boards from the burial chamber are displayed in the Viking Ship Museum located on Bygdøy peninsula in Oslo, Norway. Some other artifacts that survived the plundering are also on display in the museum. The ship will not be moved from Bygdøy, Kristin Halvorsen (Minister of Education) stated on May 3, 2012 — thirteen years after a debate regarding a possible relocation began.[11]

The Viking, an exact replica of the Gokstad ship, crossed the Atlantic Ocean from Bergen, Norway to be exhibited at the World's Columbian Exposition in Chicago during 1893. Other replicas include the Gaia, which currently has Sandefjord as its home port, the Munin, (a half scale replica) located in Vancouver, B.C., the Íslendingur in the Viking World museum in Iceland, the Hugin in Kent, England, and the replica housed at the Hjemkomst Center in Moorhead, Minnesota. [12] [13]

Gokstad is also the name of the ship of the character Tarvold in the fictional TV-show Viking Quest from the Entourage series on HBO.