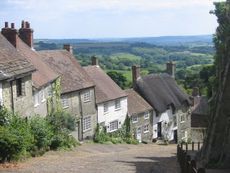 Gold Hill
File:Looking up Gold Hill for a change - geograph.org.uk - 726150.jpg
Viewed from the bottom 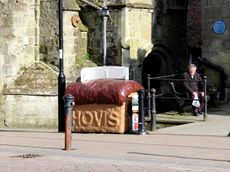 Gold Hill is a steep cobbled street in the town of Shaftesbury in the English county of Dorset. It is famous for its picturesque appearance; the view looking down from the top of the street has been described as "one of the most romantic sights in England."[1] The image of this view appears on the covers of many books about Dorset and rural England, as well as on countless chocolate boxes and calendars.

Gold Hill has also been used as a setting for film and television. It appears in the 1967 film version of Thomas Hardy's Far From the Madding Crowd.[2] The street is the main setting for the 1973 "Boy on Bike" television advertisement for Hovis bread, which has been voted Britain's favourite advertisement of all time.[2] It was directed by Ridley Scott, and includes the distinctive main theme of Antonín Dvořák's Symphony No. 9.[3] For this reason, the hill is still known to many people as "Hovis Hill".[2] Gold Hill also featured in a recent advert for supermarket Morrisons.

At the top of the street is the 14th-century St Peter's Church, one of the few buildings remaining in Shaftesbury from before the 18th century. Adjacent to the church is the former Priest's House, now part of Gold Hill Museum. The ancient cobbled street runs beside the Grade I listed walls of the ancient Shaftesbury Abbey built by King Alfred the Great; the origins of the wall are not known, but it is presumed to have been built in the 1360s, when the abbess or other authority was given royal permission to build town defences.[4]

Each year the town hosts the Gold Hill Fair to raise money for local charities.