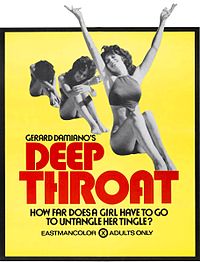 Prior to the 'Golden Age of Porn', thousands of U.S. state and municipal anti-obscenity laws and ordinances held that participating in the creation, distribution or consumption of pornography constituted criminal action. Multi-jurisdictional interpretations of obscenity made such films highly susceptible to prosecution and criminal liability for obscenity, thereby greatly restricting their distribution and profit potential. However, the US Supreme Court's 1973 decision in Miller v. California, narrowing the definition of obscenity, resulted in dramatically fewer obscenity prosecutions nationwide. Freedom in creative license, higher movie budgets and payouts, and a 'Hollywood Mindset' all intertwined to set the stage for the 'Golden Age' of American pornography.

Pornographic films were produced in the early 20th century as "stag" movies, intended to be viewed at male gatherings or in brothels. In the United States, social disapproval was so great that men in them sometimes attempted to conceal their face by subterfuge, such as a false mustache (used in A Free Ride) or even being masked.[11][12] Very few people were ever identified as appearing in such films; and performers were often presumed to have been prostitutes or criminals. Vincent Drucci is said to have performed in a pornographic film made in 1924.[13] Candy Barr, who appeared in the 1950s Smart Alec, was virtually unique among those appearing in stag films, having attained a degree of celebrity through her participation.[14]

In the US, during the late 1960s, there was regular semi-underground production of pornographic films on a modest scale. After answering New York newspaper advertisements for nude models, Eric Edwards and Jamie Gillis, among others, appeared in these films, which were silent black and white 'loops' of low quality, often intended for peep booth viewing in the proliferation of adult video arcades around Times Square.[15][16][17] The product of the New York porn industry was distributed nationwide by underworld figure Robert DiBernardo, who commissioned the production of much of the so-called 'Golden Age' era films made in New York.[18][19] Although not the first adult film to obtain a wide theatrical release in the US, none had achieved a mass audience, and changed public attitude toward pornography, as Deep Throat did.

Blue Movie by Andy Warhol, released in 1969,[1][2][3] and, more freely, Mona, by Bill Osco, released in 1970,[4] were the first films depicting explicit sex to receive wide theatrical distribution in the United States.[1][2][4] Although Blue Movie involved sexual intercourse, the film included substantial dialog about the Vietnam War and various mundane tasks.[1][2] The film Mona, on the the other hand, presented more of a story plot: Mona (played by Fifi Watson) had promised her mother that she would remain a virgin until her impending marriage.[20] Later, in December 1971, the film Boys in the Sand was released[21] and was the first pornographic film of any kind to be reviewed by Variety[22] and opened in theaters across the United States and around the world.

The 'Golden Age' of pornography continued in 1972 with Deep Throat. It officially premiered at the World Theater[23] in New York on June 12, 1972 and was advertised in The New York Times under the bowdlerized title Throat. It was very profitable though, according to one of the figures behind the film, it became a box-office success only after Johnny Carson talked about it on his nationally top-rated TV show.[24][25][26][27][28] In its second year of release, Deep Throat just missed Variety's top 10, however, by then, it was often being shown in a double bill with the most successful of the top three adult erotic films released in the 1972–1973 era, The Devil in Miss Jones, which easily outperformed Deep Throat, while leaving Behind the Green Door trailing in third place.[29]

The Devil in Miss Jones

The Devil in Miss Jones was one of the first films to be inducted into the XRCO Hall of Fame.[34] The sound-recording, cinematography, and story-line of The Devil in Miss Jones were of a considerably higher quality than any previous porn film. The lead, Georgina Spelvin, who had been in the original Broadway run of The Pajama Game, combined vigorous sex with an acting performance some thought as convincing as anything to be seen in a good mainstream production. She had been hired as a caterer, but Gerard Damiano, the film director, was impressed with her reading of Miss Jones's dialogue, while auditioning an actor for the non-sex role of 'Abca'. According to Variety's review, "With The Devil in Miss Jones, the hard-core porno feature approaches an art form, one that critics may have a tough time ignoring in the future". The review also described the plot as comparable to Jean-Paul Sartre's play No Exit,[35] and went on to describe the opening scene as, "a sequence so effective it would stand out in any legit theatrical feature."[35] It finished by stating, "Booking a film of this technical quality into a standard sex house is tantamount to throwing it on the trash heap of most current hard-core fare." [24][35][36][37][38][39][40][41]

In general, after 1973, adult erotic films emulated mainstream filmmaking storylines and conventions, merely to frame the depictions of sexual activity to prepare an 'artistic merit' defense against possible obscenity charges. The adult film industry remained stuck at the level of 'one day wonders', finished by participants hired for only a single day. The ponderous technology of the time meant filming a simple scene would often take hours due to the need for the camera to be laboriously set up for each shot.[48] Repeated sustained performances might be required on cue at any time over the course of a day, which was an issue for men without the recourse to modern Viagra-type drugs.[44][48] Production was concentrated in New York where organized crime was widely believed to have control over all aspects of the business, and to prevent entry of competitors. Although their budgets were usually very low, a subcultural level of appreciation exists for films of this era, which were produced by a core group of around thirty performers, some of whom had other jobs. Several were actors who could handle dialogue when required. However, some participants scoffed at the idea that what they did, qualified as "acting".[24][44][49] By the early 1980s, the rise of home video had led to the end of the era when people went to movie theaters to see sex shot on 35mm film with production values, ultimately culminating with the rise of the internet in the 1990s.[44]

A number of the 'Golden Age' stars have taken part in The Rialto Report,[56] an online oral history initiative that preserves and archives the memories of the industry's early participants.

At the time of the maturation of the second wave, movies increasingly were being shot on video for home release.

With the rise of video, the dominant pornographic film studios of the Second Wave period were VCA Pictures[57] and Caballero Home Video.[58]

Films of the period

Some of the best-known pornographic films of the period include: