The Golden Party Badge (German: Goldenes Parteiabzeichen, officially the Goldenes Ehrenzeichen der NSDAP; Golden Medal of the National Socialist German Workers' Party) was a special badge of the Nazi Party. The first 100,000 members who had joined and had uninterrupted service in the Party were given the right to wear it (these were denoted by the party members' number stamped on the reverse). Other Golden Party Badges (with the initials 'A.H.' stamped on the reverse) were awarded at the discretion of Adolf Hitler to certain members of the party who merited special treatment. An identical badge was awarded each year on 30 January to persons who had shown outstanding service to the Nazi Party or State.[1]

The Golden Party Badge was the basic Nazi Party Badge with the addition of a gold wreath completely encircling the badge. The badge was awarded in two sizes: 30.5 mm for wearing on uniforms and 24 mm for other use.

The badge was associated with the Alte Kämpfer (Old Fighters) and those favored by the Führer, the Nazi Party elite. The Alte Kämpfer, also referred to as the "Golden Pheasants", were those who had joined the Party before 1930. Those who joined after its electoral breakthrough in the September 1930 Reichstag elections were referred to by the Alte Kämpfer with the put-down of Septemberlinge ("little September people"). After Adolf Hitler came to power in 1933, there was a rush of applications from Germans to join the Nazi Party, and the old guard regarded these new members with contempt, seeing their applications as more opportunistic than ideological. The basic Nazi Party badge, without a gold wreath, as worn by the newer members, was sarcastically referred to by the old guard as the Angstbrosche (Badges of Fearfulness).[citation needed]

Adolf Hitler's own Golden Party Badge had the number '1'. He awarded it to Magda Goebbels in late April 1945.[2] The '1' badge was stolen from a display in Russia in 2005. The guards thought that a cat had set off the alarms and this allowed the burglar to escape.[3]

The only makers of the Golden Party Badge were the firms Joseph Fuess and Deschler & Sohn, both located in Munich. 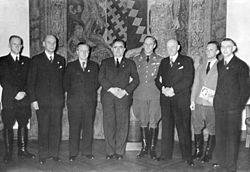 Note - In the movie Schindler's List, Oskar Schindler is shown wearing the Golden Party Badge. It has not been confirmed that Schindler received the badge in real life.

First Mother of the Reich

In April 1945, less than 48 hours before he committed suicide, Adolf Hitler gave his own Golden Party Badge to Magda Goebbels and proclaimed her as the "First Mother of the Reich". She called it "the greatest honour any German could receive".[4] Thus, technically by verbal decree, Hitler had in fact created a new grade of the Nazi Party Badge, although status as an official decoration was never recorded.[5][6]