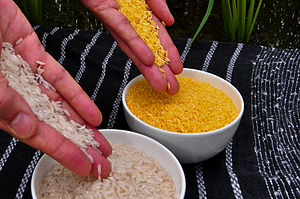 Golden rice is a variety of rice (Oryza sativa) produced through genetic engineering to biosynthesize beta-carotene, a precursor of vitamin A, in the edible parts of rice.[1] It is intended to produce a fortified food to be grown and consumed in areas with a shortage of dietary vitamin A,[2] a deficiency which is estimated to kill 670,000 children under the age of 5 each year.[3]

In 2005, Golden Rice 2 was announced, which produces up to 23 times more beta-carotene than the original golden rice.[4] To receive the USDA's Recommended Dietary Allowance (RDA), it is estimated that 144 g of the high-yielding strain would have to be eaten. Bioavailability of the carotene from golden rice has been confirmed and found to be an effective source of vitamin A for humans.[5][6][7]

Although golden rice was developed as a humanitarian tool, it met significant opposition from environmental and anti-globalization activists. Studies have found that golden rice poses no risk to human health, and multiple field tests have taken place with no adverse side-effects to participants.[8]

Golden Rice was one of seven winners of the 2015 Patents for Humanity Awards by the United States Patent and Trademark Office.[9][10] 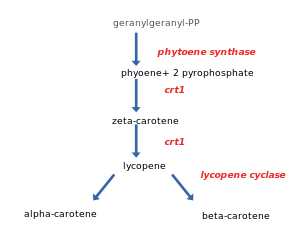 A simplified overview of the carotenoid biosynthesis pathway in golden rice. The enzymes expressed in the endosperm of golden rice, shown in red, catalyze the biosyntheis of beta-carotene from geranylgeranyl diphosphate. Beta-carotene is assumed to be converted to retinal and subsequently retinol (vitamin A) in the animal gut

Peter Bramley discovered in 2000 that a single phytoene desaturase gene (bacterial CrtI) can be used to produce lycopene from phytoene in GM tomato, rather than having to introduce multiple carotene desaturases that are normally used by higher plants.[11] Lycopene is then cyclized to beta-carotene by the endogenous cyclase in Golden Rice.[12]

The scientific details of the rice were first published in Science in 2000,[1] the product of an eight-year project by Ingo Potrykus of the Swiss Federal Institute of Technology and Peter Beyer of the University of Freiburg. At the time of publication, golden rice was considered a significant breakthrough in biotechnology, as the researchers had engineered an entire biosynthetic pathway.

Golden rice has been bred with local rice cultivars in the Philippines[13] and Taiwan and with the American rice cultivar 'Cocodrie'.[14] The first field trials of these golden rice cultivars were conducted by Louisiana State University Agricultural Center in 2004.[14] Field testing provides a more accurate measurement of nutritional value and enables feeding tests to be performed. Preliminary results from the field tests have shown field-grown golden rice produces 4 to 5 times more beta-carotene than golden rice grown under greenhouse conditions.[15]

In 2005, a team of researchers at Syngenta produced Golden Rice 2. They combined the phytoene synthase gene from maize with crt1 from the original golden rice. Golden rice 2 produces 23 times more carotenoids than golden rice (up to 37 µg/g), and preferentially accumulates beta-carotene (up to 31 µg/g of the 37 µg/g of carotenoids).[4]

(The insertion of a lcy (lycopene cyclase) gene was thought to be needed, but further research showed it is already produced in wild-type rice endosperm.)

The psy and crtI genes were transferred into the rice nuclear genome and placed under the control of an endosperm-specific promoter, so that they are only expressed in the endosperm. The exogenous lcy gene has a transit peptide sequence attached, so it is targeted to the plastid, where geranylgeranyl diphosphate is formed. The bacterial crtI gene was an important inclusion to complete the pathway, since it can catalyze multiple steps in the synthesis of carotenoids up to lycopene, while these steps require more than one enzyme in plants.[16] The end product of the engineered pathway is lycopene, but if the plant accumulated lycopene, the rice would be red. Recent analysis has shown the plant's endogenous enzymes process the lycopene to beta-carotene in the endosperm, giving the rice the distinctive yellow color for which it is named.[17] The original golden rice was called SGR1, and under greenhouse conditions it produced 1.6 µg/g of carotenoids.

Field trials on Golden Rice were started in Bangladesh in 2015.[18]

Prevalence of vitamin A deficiency. Red is most severe (clinical), green least severe. Countries not reporting data are coded blue. Data collected for a 1995 report.

The research that led to golden rice was conducted with the goal of helping children who suffer from vitamin A deficiency (VAD). In 2005, 190 million children and 19 million pregnant women, in 122 countries, were estimated to be affected by VAD.[19] VAD is responsible for 1–2 million deaths, 500,000 cases of irreversible blindness and millions of cases of xerophthalmia annually.[20] Children and pregnant women are at highest risk. Vitamin A is supplemented orally and by injection in areas where the diet is deficient in vitamin A.

Because many children in VAD-affected countries rely on rice as a staple food, genetic modification to make rice produce the vitamin A precursor beta-carotene was seen as a simple and less expensive alternative to ongoing vitamin supplements or an increase in the consumption of green vegetables or animal products.

Initial analyses of the potential nutritional benefits of golden rice suggested consumption of golden rice would not eliminate the problems of vitamin A deficiency, but could complement other supplementation.[23][24] Golden Rice 2 contains sufficient provitamin A to provide the entire dietary requirement via daily consumption of some 75g per day.[4]

Since carotenes are hydrophobic, sufficient fat must be present in the diet for golden rice (or most other vitamin A supplements) to alleviate vitamin A deficiency. Vitamin A deficiency is usually coupled to an unbalanced diet (see also Vandana Shiva's arguments below). Moreover, this claim referred to an early cultivar of golden rice; one bowl of the latest version provides 60% of RDA for healthy children.[25] The RDA levels advocated in developed countries are far in excess of the amounts needed to prevent blindness.[4]

Dr. José L. Domingo of the Laboratory of Toxicology and Environmental Health, School of Medicine, at Rovira i Virgili University in Spain said, "According to the information reported by the WHO, genetically modified products that are currently on the international market have all passed risk assessments conducted by national authorities." These assessments found no risk to human health. Domingo advocates continued research in the areas of GM rice and its effects on humans.[26]

In 2009, results of a clinical trial of golden rice with adult volunteers from the US were published in the American Journal of Clinical Nutrition. The trial concluded that "beta carotene derived from golden rice is effectively converted to vitamin A in humans".[27] A summary for the American Society for Nutrition suggested that "Golden Rice could probably supply 50% of the Recommended Dietary Allowance (RDA) of vitamin A from a very modest amount — perhaps a cup — of rice, if consumed daily. This amount is well within the consumption habits of most young children and their mothers".[28]

It is well known that beta carotene is found and consumed in many nutritious foods eaten around the world, including fruits and vegetables. Beta carotene in food is a safe source of vitamin A.[29]

The Food Allergy Resource and Research Program of the University of Nebraska undertook research in 2006 that showed the proteins from the new genes in golden rice showed no allergenic properties.[30]

In August 2012, Tufts University and others published research on golden rice in the American Journal of Clinical Nutrition showing that the beta carotene produced by golden rice is as effective as beta carotene in oil at providing vitamin A to children.[31] The study stated that "recruitment processes and protocol were approved".[31][32] In 2015 the journal retracted the study, claiming that the researchers had acted unethically when providing Chinese children golden rice without their parents' consent.[33]

Critics of genetically engineered crops have raised various concerns. An early issue was that golden rice originally did not have sufficient vitamin A. This problem was solved by the development of new strains of rice.[4] The speed at which vitamin A degrades once the rice is harvested, and how much remains after cooking are contested.[34] However, a 2009 study concluded that golden rice is effectively converted into vitamin A in humans[5] and a 2012 study that fed 68 children ages 6 to 8 concluded that golden rice was as good as vitamin A supplements and better than the natural beta-carotene in spinach.[7]

Greenpeace opposes the use of any patented genetically modified organisms in agriculture and opposes the cultivation of golden rice, claiming it will open the door to more widespread use of GMOs.[35][36] The International Rice Research Institute (IRRI) has emphasised the non-commercial nature of their project, stating that "None of the companies listed ... are involved in carrying out the research and development activities of IRRI or its partners in Golden Rice, and none of them will receive any royalty or payment from the marketing or selling of golden rice varieties developed by IRRI."[37]

Vandana Shiva, an Indian anti-GMO activist, argued the problem was not the plant per se, but potential problems with poverty and loss of biodiversity. Shiva claimed these problems could be amplified by the corporate control of agriculture. By focusing on a narrow problem (vitamin A deficiency), Shiva argued, golden rice proponents were obscuring the limited availability of diverse and nutritionally adequate food.[38] Other groups argued that a varied diet containing foods rich in beta carotene such as sweet potato, leaf vegetables and fruit would provide children with sufficient vitamin A.[39] Keith West of Johns Hopkins Bloomberg School of Public Health has stated that foodstuffs containing vitamin A are often unavailable, only available at certain seasons, or too expensive for poor families in underdeveloped countries.[7]

In 2008, WHO malnutrition expert Francesco Branca cited the lack of real-world studies and uncertainty about how many people will use golden rice, concluding "giving out supplements, fortifying existing foods with vitamin A, and teaching people to grow carrots or certain leafy vegetables are, for now, more promising ways to fight the problem".[40]

In 2013, author Michael Pollan, who had critiqued the product in 2001, unimpressed by the benefits, expressed support for the continuation of the research.[41]

On August 8, 2013 an experimental plot of golden rice being developed at IRRI in the Philippines was uprooted by protesters.[25][41][42] Mark Lynas, a famous former anti-GMO activist, reported in Slate that the vandalism was carried out by a group of activists led by the extreme left-inclined Kilusang Magbubukid ng Pilipinas (KMP) (unofficial translation: Farmers' Movement of the Philippines), to the dismay of other protesters.[41][43] No local farmers participated in the uprooting, only the small number of activists damaged the golden rice crops, because the farmers believe in their local customs which imply that killing a living rice plant is unlucky.[44]

Potrykus has enabled golden rice to be distributed free to subsistence farmers.[45] Free licenses for developing countries were granted quickly due to the positive publicity that golden rice received, particularly in Time magazine in July 2000.[46] Monsanto Company was one of the first companies to grant free licences.[47]

The cutoff between humanitarian and commercial use was set at US$10,000. Therefore, as long as a farmer or subsequent user of golden rice genetics does not make more than $10,000 per year, no royalties need to be paid. In addition, farmers are permitted to keep and replant seed.[48]