From Infogalactic: the planetary knowledge core
Jump to: navigation, search
File:Golden Triangle.svg
A golden triangle. The ratio a:b is equivalent to the golden ratio φ.

A golden triangle, also known as the sublime triangle,[1]is an isosceles triangle in which the duplicated side is in the golden ratio to the distinct side:

Golden triangles are found in the nets of several stellations of dodecahedrons and icosahedrons.

Also, it is the shape of the triangles found in the points of pentagrams. The vertex angle is equal to

Since the angles of a triangle sum to 180°, base angles are therefore 72° each.[1] The golden triangle can also be found in a decagon, or a ten-sided polygon, by connecting any two adjacent vertices to the center. This will form a golden triangle. This is because: 180(10-2)/10=144 degrees is the interior angle and bisecting it through the vertex to the center, 144/2=72.[1]

The golden triangle is also uniquely identified as the only triangle to have its three angles in 2:2:1 proportions.[2]

The golden triangle is used to form a logarithmic spiral. By bisecting the base angles, a new point is created that in turn, makes another golden triangle.[3] The bisection process can be continued infinitely, creating an infinite number of golden triangles. A logarithmic spiral can be drawn through the vertices. This spiral is also known as an equiangular spiral, a term coined by René Descartes. "If a straight line is drawn from the pole to any point on the curve, it cuts the curve at precisely the same angle," hence equiangular.[4] 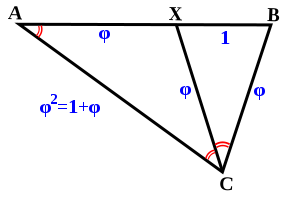