Goldsboro is a city in Wayne County, North Carolina, United States. The population was 36,437 at the 2010 Census.[3] It is the principal city of and is included in the Goldsboro, North Carolina Metropolitan Statistical Area. The nearby town of Waynesboro was founded in 1787 and Goldsboro was incorporated in 1847. It is the county seat of Wayne County.[4] The city is situated in North Carolina's Coastal Plain and is bordered on the south by the Neuse River and the west by the Little River, about 43 miles southwest of Greenville[4] and 55 miles southeast of Raleigh, the state capital and 87 miles northwest of Wilmington in Southeastern North Carolina. Goldsboro is best known as home to Seymour Johnson Air Force Base.

Around 1787, when Wayne County was formed, a town named Waynesborough grew around the county's courthouse. In 1787, William Whitfield III (son of William Whitfield II) and his son were appointed "Directors and Trustees" for designing and building the town.[7][8] Located on the east bank of the Neuse River, the town became the county seat. Population growth in Waynesborough continued through the 1830s. However, this changed once the Wilmington and Weldon Railroad was completed in the early 1840s. By then, a hotel had been built at the intersection of the railroad and New Bern Road, which grew into a community after the train started to transport passengers from there.

More and more citizens soon relocated from Waynesborough to this growing village, named eventually "Goldsborough's Junction" after Major Matthew T. Goldsborough, an Assistant Chief Engineer with the railroad line. Later this was shortened simply to Goldsborough. In 1847, the town was incorporated and became the new Wayne County seat following a vote of the citizens of Wayne County. Local legend has it the Goldsborough supporters put moonshine in the town's well to encourage people to vote for Goldsborough.

In the following decades, Goldsborough's growth continued in part by new railroad connections to Charlotte and Beaufort. By 1861, the town's population was estimated to be 1,500. It was the trading center of a rural area that started with yeoman farmers. By this time, it had been developed as large cotton plantations dependent on the labor of enslaved African Americans, as the invention of the cotton gin had enabled profitable cultivation of short-staple cotton in the upcounties.

Because of its importance as railroad junction, Goldsborough played a significant role in the Civil War, both for stationing Confederate troops and for transporting their supplies. The town also provided hospitals for soldiers wounded in nearby battles.

In December 1862, the Battle of Goldsborough Bridge was waged, in which both sides fought for possession of the strategically significant Wilmington and Weldon Railroad Bridge. Union General John Foster arrived with his troops on December 17, aiming to destroy this bridge in order to put an end to the vital supply chain from the port of Wilmington. He succeeded on that same day, his troops overpowering the small number of defending Confederate soldiers and burning down the bridge. On their way back to New Bern, Foster's men were attacked again by Confederate troops, but they survived with fewer casualties than the enemy. The important bridge at Goldsborough was rebuilt in a matter of weeks.

Goldsborough was the scene of another Union offensive in 1865, during Union General Sherman's Carolinas Campaign. After the battles of Bentonville and Wyse Fork, Sherman's forces met with the armies of Schofield, their troops taking over the city in March. During the following three weeks, Goldsborough was occupied by over 100,000 Union soldiers. After the war was over, some of these troops continued to stay in the city.

In 1869, the spelling of the city was officially changed to Goldsboro. Wayne County was part of North Carolina's 2nd congressional district following the Civil War, when it was known as the "Black Second", for its majority-black population. This district elected four Republican African Americans to Congress in the 19th century, three of them after the Reconstruction era. The attorney George Henry White was the last to serve, being elected in 1894 and serving two terms. 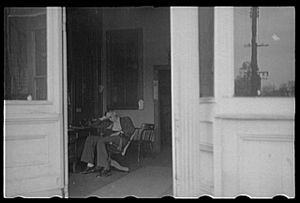 The Democrat-dominated legislature established legal racial segregation in public facilities. To further this, in the 1880s it authorized a facility to serve the black mentally ill, the State Hospital in Goldsboro. In 1899 the legislature authorized an addition but did not appropriate sufficient funds.[9] This operated until after passage of civil rights legislation requiring integration of public facilities. In addition, the hospital was affected by the 1970s movement to de-institutionalize care for the mentally ill. Most states have failed to adequately support community programs to replace such facilities.

During World War II the North Carolina Congressional delegation was successful in gaining the present-day Seymour Johnson Air Force Base, which opened on the outskirts of Goldsboro in April 1942 as a US Army Air Forces installation named Seymour Johnson Field. From this point on, the city's population and businesses increased as a result of the federal defense installation. The base's name was changed to Seymour Johnson AFB in 1947 following the establishment of the US Air Force as an independent service.

The city is home to Goldsboro Milling Company, the 10th largest producer of hogs in the U.S., and also a major producer of turkeys.

In 1961, two 3.8 megaton hydrogen bombs were dropped accidentally on the village of Faro, 12 miles (19 km) north of Goldsboro, after a B-52 aircraft broke up in mid air. The two Mark 39 weapons were released after the crew abandoned a B-52 bomber which had suffered mid-flight structural failure. Both bombs went through several steps in the arming sequence, but neither one detonated.[11] One bomb was recovered. Although much of the second bomb was also recovered, a missing piece containing uranium was believed to have sunk deep into the swampy earth and could not be recovered. The piece remains in land that the Air Force eventually purchased in order to prevent any land use or digging.[12] In 2013, it was revealed that three safety mechanisms on one bomb had failed, leaving just one low-voltage switch preventing detonation.[13]

Alfonzo "Al" King is presently the city's Mayor, succeeding former mayor Hal Plonk in 2002. As mayor, King is the official and ceremonial head of city government and presides at all City Council meetings. The mayor and the City Council are elected to office for a four-year term. Goldsboro has a council-manager government. The former City Manager, Joseph R. Huffman, retired on February 28, 2011. The current City Manager is Scott Stevens.

Goldsboro is in North Carolina's 1st, and the newly created 13th Congressional District and is currently represented by Democrat G. K. Butterfield, and Republican George Holding.

Goldsboro is represented in the Senate by Republican Richard Burr and Democrat Kay Hagan.

The Goldsboro News-Argus is the city's only daily newspaper, with a circulation of approximately 21,500.

Goldsboro supports one television station. WHFL TV 43 is a low power broadcast station on UHF channel 43 and is also found on two local cable networks. The station is a FamilyNet affiliate and carries religious, local, and family programming. The area is also served by television stations from the Raleigh-Durham and Greenville areas. NBC affiliate WNCN-TV, Channel 17, is licensed to Goldsboro but has its studios in Raleigh. Up until August 2010, a Public, educational, and government access (PEG) cable TV station called PACC-10 TV was available to Time Warner customers. The station aired its own programming as well as City Council and County Commissioner meetings. Time-Warner transferred the channel to Wayne County who currently provides local announcements and community interest programming.

Radio stations based in Goldsboro

The closest civilian airport is Wayne Executive Jetport, but is only used for general aviation. The nearest public commercial airport is Kinston Regional Jetport (IATA: ISO) in Kinston about 28 miles east of Goldsboro, although most residents use Raleigh-Durham International Airport for domestic and international travel.

Work is currently being done to finish NC 44, which will be the Goldsboro Bypass upon completion.

The city has a bus system known as Gateway which runs four routes.