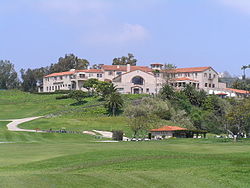 A country club is a privately owned club, often with a closed membership, that generally offers both a variety of recreational sports and facilities for dining and entertaining. Typical athletic offerings are golf, tennis, and swimming. A country club is most commonly located in city outskirts or suburbs,[1] and is distinguished from an urban athletic club by having substantial grounds for outdoor activities.

Country clubs originated in Scotland[2] and first appeared in the US in the early 1880s.[3] Country clubs had a profound effect on expanding suburbanization[4] and are considered to be the precursor to gated community development.[3] 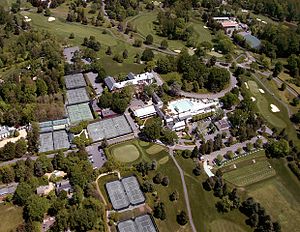 An aerial view of the Farmington Country Club in Charlottesville, Virginia

Country clubs can be exclusive organizations. In small towns, membership in the country club is often not as exclusive or expensive as in larger cities where there is competition for a limited number of memberships. In addition to the fees, some clubs have additional requirements to join. For example, membership can be limited to those who reside in a particular housing community.

Historically, many country clubs refused to admit members of minority racial groups as well those of specific faiths, such as Jews and Catholics. This was known as being “restricted”.[8] Beginning in the 1960s civil rights lawsuits forced clubs to drop exclusionary policies, but de facto discrimination still occurs in cases until protest or legal remedies are brought to bear.

The Philadelphia Cricket Club is the oldest country club in the United States.[citation needed] 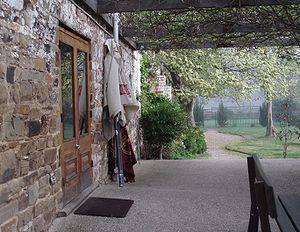 A beer garden at an Australian country club.