The Royal Curragh Golf Club was the first golf club built in Ireland in 1853. Golf in Ireland continues to enjoy a healthy patronage rating fourth in the Top Ten Most Popular Sporting Activities of 2008.[1] Also in 2008, membership in the Golfing Union of Ireland was at 166,419 and membership in the Irish Ladies Golf Union was 49,822, making them third and seventh in the Top Ten Sports by Club/Association Membership respectively.[1] Golf ranks third in Euros spent on activities in Ireland by overseas travelers bringing 183m in 2012.[2] In the same year, the game of golf contributed over 15b Euros to the total European economy.[3] In 2007, Pádraig Harrington became the first golfer from the Republic of Ireland to win The Open Championship, the oldest of the four Men's major championships.

History of golf in Ireland

Although most historians agree that the birthplace of golf occurred in Scotland, the sport has a rich and colorful history in Ireland. Dating back to the mid-1800s, one of the fascinating aspects of Ireland's golf history is that many of its oldest courses are still around today, giving players and tourists a first hand account of its history. Today, Ireland is one of the nations with the most golf courses per capita in the world.[4]

Golf in the modern world originated from a game played on the eastern coast of Scotland in the Kingdom of Fife during the 15th century. Golf was officially introduced in Scotland in 1421. The game quickly spread throughout Europe due to the royal endorsement of King Charles I who brought the game to England. One of the oldest and most popular courses at the time was the Royal Curragh Golf Club, which opened in 1856.[5] It quickly spread to Ireland from Scotland.

The Golfing Union of Ireland was established in 1891, making it the oldest national golfing union in the world.[7] It is based out of Carton House, Maynooth. It currently represents 430 golf clubs and 170,000 members, compared with the nine original founding clubs. Union business is conducted by a Central Council and four smaller governing branches: Connacht, Leinster, Munster, and Ulster.

The Ladies’ Golf Union of Great Britain and Ireland was founded in 1893, just two years later. It is based out of St Andrews, Fife, Scotland. The LGU works to provide women golfers opportunities to participate and compete and to aide British and Irish women in becoming successful golfers, domestically and internationally. The LGU also actively works to attain gender equality in golf and provide a unified voice to work for the interests of women golfers.[8]

Past tournaments held in Ireland 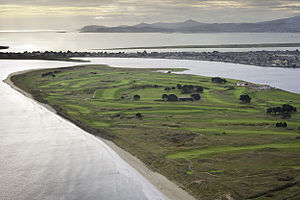 The Republic of Ireland has twenty-six different counties, seven different types of regions, and nearly 300 different courses to suit any golfers needs.[9] Courses in the West offer views alongside the Atlantic Ocean which symbolize links-style golf instead of the standard Country Club "tree-lined" look. Then there are courses with great history such as Portmarnock in the Dublin region, which was home to fifteen Irish Opens. If you are looking to play what our golfing forefathers played on, then there are courses that were established in the 19th-Century such as Lahinch in County Clare (1894) and the Royal Curragh Golf Club in Kildare (1858) that still receive great amounts of play and tourism. Here is a list of notable courses in the Republic of Ireland;[10]

Pádraig Harrington was the first golfer from the Republic of Ireland to win The Open Championship. Other notable Irish golfer's include; Sir Alexander William Shaw Founder of Limerick and Lahinch golf clubs; Rhona Adair, a female Irish golfer who contributed to the first American book on golfing for women entitled Golf for Women in 1904;[11] and Paddy Skerritt who won many Irish tournaments with his greatest success at the 1970 Alcan International.[12]