Gomer Pyle is a television character played by Jim Nabors and introduced in the middle of the third season of The Andy Griffith Show. Pyle, a simpleminded and gentle auto mechanic, became a character when actor Howard McNear, who portrayed Floyd the Barber, took a respite from the show due to health reasons. Nabors played Pyle for 23 episodes from 1962 to 1964.[1]

After two seasons on The Andy Griffith Show, McNear returned and Griffith proposed a show based on the Gomer Pyle character. In 1964, the character was spun off into Gomer Pyle, U.S.M.C.,[2] which ran until 1969.

Pyle is a good-natured, naïve single man with a high tenor speaking voice from Mayberry, North Carolina. The only apparent employee at Wally's Filling Station, he initially lived there in a back room. Wide-eyed and slack jawed, he usually wore a service station uniform and a baseball cap with an upturned bill; a handkerchief dangled from his back pocket. He initially displayed scant knowledge of automotive mechanics: in "The Great Filling Station Robbery", for example, he thought a carburetor was a hood ornament. In the same episode, he admitted all he knew how to do was fill cars with gas, oil, water and air. However, he learned over time, and in other episodes he was able to diagnose mechanical problems for the average lay person. In his first appearance, in an episode called "The Bank Job," Gomer is shown operating a blow torch to cut through a bank's vault. In another episode, Gomer diagnoses a problem with a car belonging to a visitor from out of town who is delayed due to a mechanical breakdown. 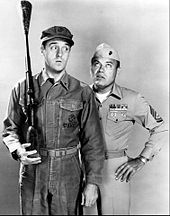 Gomer as a new recruit under Sergeant Carter's evaluation.

Gomer was sometimes deputized by Deputy Barney Fife, when Sheriff Taylor was otherwise occupied. Though always compliant, Gomer's ineptitude usually made him more of a hindrance than a help in the line of duty. However, in the eyes of his friends, especially Sheriff Andy Taylor, his shortcomings were generally outweighed by his gentle, generous spirit.

Gomer's Mayberry roots were evident in the spin-off series Gomer Pyle, U.S.M.C., where his countrified, backward nature served as the mainstay for the show's humor, making him a comic foil to the hard-nosed drill instructor Sergeant Vince Carter, played by Frank Sutton. Both series also included several episodes displaying Gomer's skill as a baritone singer. In one episode, Gomer stated that his birthday was on Feb 26.

At first Sergeant Carter was rankled and extremely irritated by the slow-witted Pyle, and dreamed of ways to rid himself of the private's presence. Over the course of the series, however, Carter began to tolerate Pyle, and even grew to respect him. Pyle, though always unconventional, developed into a good Marine, yet never went an episode without causing some degree of irritation for Carter. In the final episode, Gomer requests a transfer after realizing he is nothing but a source of constant anxiety for Carter. Carter, initially pleased with the request, later arranges for the transfer to be denied; and, the episode ends with Carter insisting the two shake hands, not knowing Gomer's hand is covered in shellac.

Both The Andy Griffith Show and Gomer Pyle USMC ended their runs by the late 1960s. While Mayberry R.F.D. continued from 1968 to 1971, where The Andy Griffith Show left off, the concept of returning Gomer to Mayberry was nixed, as the actor was given a CBS variety show of his own (which lasted two seasons). Gomer eventually returned, along with most of the original cast of The Andy Griffith Show, to the 1986 television movie Return to Mayberry. Gomer and Goober Pyle run a gas station/car repair shop called "G & G Garage," implying that Gomer's Marine career had, at some point, ended.

On an episode of The Lucy Show, "Lucy Gets Caught Up in the Draft," Nabors has a cameo role as "Gomer Pyle".

The following is a list of Andy Griffith Show episodes featuring Gomer before his spin-off series.