Gonville and Caius College (often referred to simply as "Caius" /ˈkiːz/ KEEZ[1]) is a constituent college of the University of Cambridge in Cambridge, England. The college is the fourth-oldest college at the University of Cambridge and one of the wealthiest. The college has been attended by many students who have gone on to significant accomplishment, including thirteen Nobel Prize winners, the second-most of any Oxbridge college (after Trinity College, Cambridge).[1][2][3]

The college has long historical associations with medical teaching, especially due to its alumni physicians: John Caius (who gave the college the caduceus in its insignia) and William Harvey. Other famous alumni in the sciences include Francis Crick (joint discoverer, along with James Watson, of the structure of DNA), Sir James Chadwick (discoverer of the neutron) and Sir Howard Florey (developer of penicillin). Stephen Hawking, previously Cambridge's Lucasian Chair of Mathematics Emeritus, is a current fellow of the college.[4] The college also maintains world-class academic programmes in many other disciplines, including economics, English literature and history.

Gonville and Caius is said to own or have rights to much of the land in Cambridge. Several streets in the city, such as Harvey Road, Glisson Road and Gresham Road, are named after alumni of the College.[5] 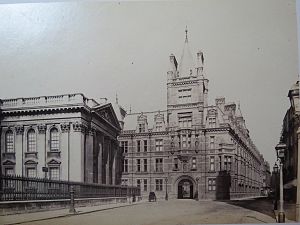 The college was first founded, as Gonville Hall, by Edmund Gonville, Rector of Terrington St Clement in Norfolk in 1348, making it the fourth-oldest surviving college. When Gonville died three years later, he left a struggling institution with almost no money. The executor of his will, William Bateman, Bishop of Norwich, stepped in, transferring the college to its current location. He leased himself the land close to the river to set up his own college, Trinity Hall, and renamed Gonville Hall The Hall of the Annunciation of the Blessed Virgin Mary. Bateman appointed the first Master of the new college his former chaplain John Colton, later Archbishop of Armagh.

By the sixteenth century, the college had fallen into disrepair, and in 1557 it was refounded by Royal Charter as Gonville and Caius College by the physician John Caius.[6] John Caius was master of the college from 1559 until shortly before his death in 1573. He provided the college with significant funds and greatly extended the buildings.

During his time as Master, Caius accepted no payment but insisted on several unusual rules. He insisted that the college admit no scholar who “is deformed, dumb, blind, lame, maimed, mutilated, a Welshman, or suffering from any grave or contagious illness, or an invalid, that is sick in a serious measure”.[7] Caius also built a three-sided court, Caius Court, “lest the air from being confined within a narrow space should become foul”. Caius did, however, found the college as a strong centre for the study of medicine, a tradition that it aims to keep to this day.

By 1630, the college had expanded greatly, having around 25 fellows and 150 students, but numbers fell over the next century, only returning to the 1630 level in the early nineteenth century. Since then the college has grown considerably and now has one of the largest undergraduate populations in the university. The college first admitted women as fellows and students in 1979. It now has over 110 Fellows, over 700 students and about 200 staff.

Gonville and Caius is one of the wealthiest of all Cambridge colleges with net assets of £180 million in 2014.[8]

The college’s present Master, the 42nd, is Sir Alan Fersht.[9] 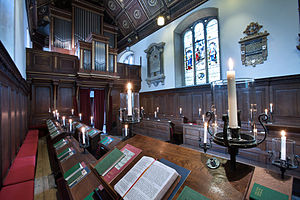 Interior of the chapel. 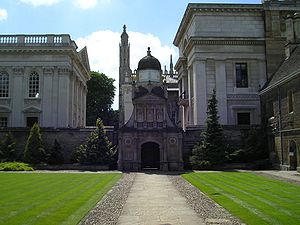 The Gate of Honour.

The first buildings to be erected on the college’s current site date from 1353 when Bishop Bateman built Gonville Court. The college chapel was added in 1393 with the Old Hall (used until recently as a library) and Master’s Lodge following in the next half century. Most of the stone used to build the college came from Ramsey Abbey near Ramsey, Cambridgeshire. Gonville and Caius has the oldest college chapel in either Oxford or Cambridge which has been in continuous use as such. The chapel is situated centrally within the college, reflecting the college's religious foundation.[10]

On the re-foundation by Dr Caius, the college was expanded and updated. In 1565 the building of Caius Court began, and Caius planted an avenue of trees in what is now known as Tree Court. He was also responsible for the building of the college's three gates, symbolising the path of academic life. On matriculation, one arrives at the Gate of Humility (near the Porters' Lodge). In the centre of the college one passes through the Gate of Virtue regularly. And finally, graduating students pass through the Gate of Honour on their way to the neighbouring Senate House to receive their degrees. The Gate of Honour, at the south side of Caius Court, though the most direct way from the Old Courts to the College Library (Cockerell Building), is only used for special occasions such as graduation. The students of Gonville and Caius commonly refer to the fourth gate in the college, between Tree Court and Gonville Court, which also gives access to some lavatories, as the Gate of Necessity.

The buildings of Gonville Court were given classical facades in the 1750s, and the Old Library and the Hall were designed by Anthony Salvin in 1854. On the wall of the Hall hangs a college flag which in 1912 was flown at the South Pole by Cambridge's Edward Adrian Wilson during the famous Terra Nova Expedition of 1910–1913. Gonville Court, though remodelled in the eighteenth and nineteenth centuries, is the oldest part of the college. 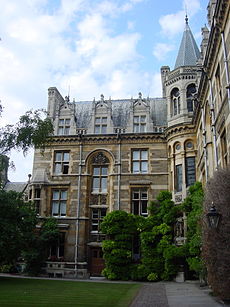 Tree Court is the largest of the Old Courts. It is so named because John Caius planted an avenue of trees there. Although none of the original trees survive, the court retains a number of trees and the tree-lined avenue, which is unusual for a Cambridge front court.

Caius owns a substantial amount of land between West Road and Sidgwick Avenue. Set in landscaped gardens, the modern Harvey Court (named after William Harvey and designed by Sir Leslie Martin) was built on the West Road site in 1961. Adjacent to Harvey Court is the Stephen Hawking Building, which opened its doors to first-year undergraduates in October 2006. Providing ensuite accommodation for 75 students and eight fellows, as well as providing conference facilities in the vacations, the Stephen Hawking Building boasts some of the highest-standard student accommodation in Cambridge.

Additional buildings provide housing for older students, a day care, and various study and music rooms. The college also owns extensive gardens and the land on which the adjacent Squire Law Library has stood since 1968.

Other courts and college accommodation 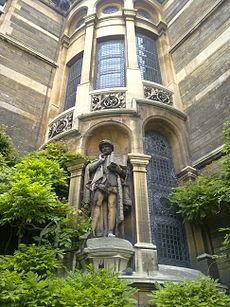 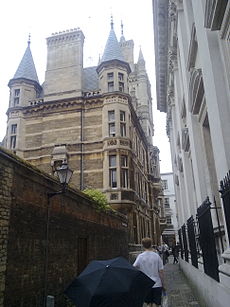 These courts are across Trinity Street on land surrounding St Michael's Church. St Michael's Court was completed only in the 1930s, with the building on its south side of a new building overlooking the Market Place.

The college also owns several houses around Cambridge, on Mortimer Road and Gresham Road, where some second year undergraduates live.

Gonville and Caius College maintains many traditions, and is unusual in that it offers two seatings in Hall six nights a week. Typically attended by between 200-300 students, Hall consists of a three-course meal served after 18:00 (First Hall) or 19:15 (Formal Hall); Formal Hall requires a gown be worn, also seats Fellows at high table, and is preceded by the benediction

As at most Oxbridge colleges, it is tradition that only the Fellows may walk on the grass.[13]

The college also enforces the system of "exeats", or official permissions to leave the college. Students wishing to be absent from college overnight during term time must obtain leave to do so from their tutors, and "terminal exeats" must be obtained before the end of term.[14]

Caius Jazz takes place most terms in the college bar, inviting 'some of the most illustrious names in the contemporary scene' and a house band of students studying at London conservatoires to play in the college bar.[15] In recent years Steve Fishwick, Sam Mayne, Ian Shaw, Barry Green, Gareth Lockrane, and Paul Jarvis have all been featured.

The Caius May Ball is an all-night party in June, held every two years.

The choir was founded by the composer Charles Wood in the late nineteenth century, and is currently directed by the scholar of South-American choral music, Geoffrey Webber. The choir tours abroad and records eclectically. The choir is made up from Scholars and Exhibitioners from the college, and a few volunteers from other colleges.[16]

Stained glass window in the dining hall of Caius College, in Cambridge, commemorating Francis Crick and representing the structure of DNA.

Stained glass window in the dining hall of Caius College, in Cambridge, commemorating John Venn and his invention of the Venn diagram.