The criteria for a Good Conduct Medal is defined by Executive Orders 8809, 9323, and 10444. The medal is awarded to any active-duty enlisted member of the United States military who completes three consecutive years of "honorable and faithful service". Such service implies that a standard enlistment was completed without any non-judicial punishment, disciplinary infractions, or court martial offenses. If a service member commits an offense, the three-year mark "resets" and a service member must perform an additional three years of service without having to be disciplined, before the Good Conduct may be authorized.[1][2]

Service for the Good Conduct Medal must be performed on active duty; it is not awarded to enlisted members of the military reserve or National Guard for reserve duty (though reservists are eligible if they complete sufficient active service). The various services have established separate Reserve Good Conduct Medals, albeit under various names, as a comparable award available to enlisted Reserve and National Guard members who satisfactorily perform annual training, drill duty and any additional active duty of less than 3 consecutive years duration. The exception is the Navy Reserve which discontinued the award as of 1 January 2014.[3] Navy Reservists now earn time towards the Navy Good Conduct medal, and any time previously earned towards an unawarded Reserve Good Conduct Medal is automatically carried over to the Navy Good Conduct Medal. 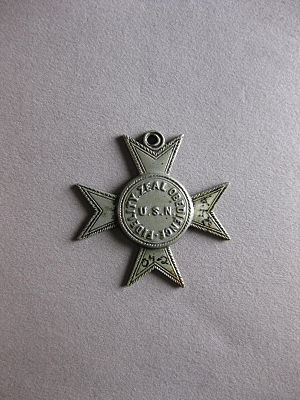 The Navy Good Conduct Medal is the third oldest continuously awarded medal in the United States. The "U.S.N." Type I medal was authorized on 26 April 1869 and was produced by E. V. Haughwout Company of New York. The medal was issued with a red, white and blue material suspension ribbon without a suspension pin. The medal is in the design of a Maltese cross and the name of the recipient was engraved on the reverse.[4]

There was slight oddity during the Spanish–American War when the Navy created the Specially Meritorious Service Medal which also had an all red suspension and service ribbon. There were recorded cases of Navy enlisted personnel who were awarded both the Good Conduct Medal and the Specially Meritorious Service Medal who wore two red service ribbons on their Navy service uniforms. This is one of the rare times in the history of U.S. military awards that two awards had identical ribbons.

The current Navy Good Conduct Medal dates from 1961 and is issued to every active duty enlisted sailor who completes three years of honorable and faithful service since 1 January 1996; four years of service were required since 1 November 1963. Additional awards of the Navy Good Conduct Medal are denoted by bronze and silver 3/16 inch stars. The reverse side of the medal has three words, "FIDELITY ZEAL OBEDIENCE" superimposed in a semicircle. Upon 12 years of honorable and faithful service, sailors are also allowed to wear gold-colored version of their Petty Officer insignia, something usually seen with those with the rank of Chief Petty Officer or Petty Officer First Class and above, but occasionally Petty Officer Second Class. It is extremely rare in today's Navy, but provisions do allow for Petty Officer Third Class to wear gold ranks provided they meet the same requirements.

The Marine Corps Good Conduct Medal was established on 20 July 1896. The medal was originally a ribbon and medal suspended from a clasp bearing the words "U.S. Marine Corps". The clasp was eliminated after 1935 and the medal has remained unchanged in appearance since that time. Since its inception in 1896, the name of the recipient was engraved by hand on the reverse side of the medal until stamping the name on the medal began during World War II (numbered on the rim) and was done completely by 1951.[6]

The Army Good Conduct Medal was established by Executive Order 8809, dated 28 June 1941, and authorized the award for soldiers completing three years active service after that date.

The criteria were amended by Executive Order 9323, dated 31 March 1943, to authorize the award for candidates having three years of service after 7 December 1941 or one year of service while the United States is at war.

The eagle, with wings spread, denotes vigilance and superiority.
The horizontal sword denotes loyalty,
The book represents knowledge acquired and ability gained.
On the reverse, the lone star denotes merit.
The wreath of laurel and oak leaves denotes reward and strength.

The Good Conduct Medal is awarded for exemplary behavior, efficiency, and fidelity in active Federal Military service. It is awarded on a selective basis to each soldier who distinguishes himself/herself from among his/her fellow soldiers by their exemplary conduct, efficiency, and fidelity throughout a specified period of continuous enlisted active Federal military service. Qualifying periods of service include each three years completed after 27 August 1940 or, for first award only, upon completion of at least one year upon termination of service if separated prior to three years. Also for the first award only, for those individuals who died before completing one year of active Federal military service if the death occurred in the line of duty. The immediate commander must approve the award and the award must be announced in permanent orders.[9]

The criteria for award of the Air Force Good Conduct medal are as follows: It is awarded to Air Force enlisted personnel during a three-year period of active military service or for a one-year period of service during a time of war. Airmen awarded this medal must have had character and efficiency ratings of excellent or higher throughout the qualifying period including time spent in attendance at service schools, and there must have been no convictions of court martial or non-judicial punishment during this period.[10]

In October 2005, the 97th Air Force Uniform Board met and considered discontinuing the Good Conduct Medal with the rationale that good conduct of Airmen is the expected standard, not an exceptional occurrence worthy of recognition. The decision was finalized on 8 February 2006 and the medal was no longer issued. Airmen who had previously earned the Good Conduct Medal were still authorized to wear it. By May 2008, however, Air Force officials began reconsidering the policy.[11] On 11 February 2009, the medal was reinstated and made retroactive to 8 February 2006, with all eligible recipients being awarded the medal automatically.[12]