The magazine was founded May 2, 1885[2] by Clark W. Bryan in Holyoke, Massachusetts.

Good Housekeeping is one of the "Seven Sisters", a group of women's service magazines.

The Hearst Corporation created a British edition along the same lines in 1922. 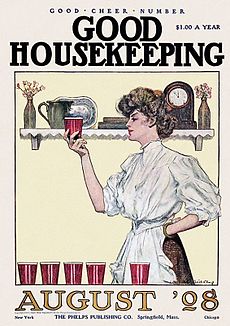 Cover from August 1908 made by John Cecil Clay.

In 1900, the "Experiment Station", the predecessor to the Good Housekeeping Research Institute (GHRI), was founded. In 1902, the magazine was calling this "An Inflexible Contract Between the Publisher and Each Subscriber." The formal opening of the headquarters of GHRI - the Model Kitchen, Testing Station for Household Devices, and Domestic Science Laboratory - occurred in January 1910.[5]

In 1909, the magazine established the Good Housekeeping Seal of Approval. Products advertised in the magazine that bear the seal are tested by GHRI and are backed by a two-year limited warranty. About 5,000 products have been given the seal.[6]

In April 1912, a year after Hearst bought the magazine, Harvey W. Wiley, the first commissioner of the U.S. Food and Drug Administration (1907–1912), became head of GHRI and a contributing editor whose "Question Box" feature ran for decades.[7] Beginning with a "Beauty Clinic" in 1932, departments were added to the Institute, including a "Baby's Center," "Foods and Cookery," and a "Needlework Room." Some functioned as testing laboratories, while others were designed to produce editorial copy.

After the passage of the Food, Drug, and Cosmetic Act in 1938, Assistant Secretary of Agriculture Rexford Tugwell sought to promote a government grading system. The Hearst Corporation opposed the policy in spirit, and began publishing a monthly tabloid attacking federal oversight. In 1939, the Federal Trade Commission filed a complaint against Good Housekeeping for "misleading and deceptive" guarantees including its Seal of Approval, and "exaggerated and false" claims in its advertisements. The publisher fought the proceedings for two years, during which time competing editors from the Ladies Home Journal and McCall's testified against Good Housekeeping. The FTC's ultimate ruling was against the magazine, forcing it to remove some claims and phraseology from its ad pages. The words "Tested and Approved" were dropped from the Seal of Approval. But the magazine's popularity was unaffected, steadily rising in circulation and profitability. In 1962, the wording of the Seal was changed to a guarantee of "Product or Performance," while dropping its endorsement of rhetorical promises made by the advertisers. In its varying forms, the Seal of Approval became inextricably associated with the magazine, and many others (e.g. McCall's, Parents Magazine and Better Homes and Gardens) mimicked the practice.

In 2012, the test kitchen of the Good Housekeeping Research Institute was implemented into a new instructional cooking, nutrition, and exercise TV show on the Cooking Channel, entitled Drop 5 lbs with Good Housekeeping.[8]

In Latin America and particularly in the Latin American community resident in the United States, the magazine is known in Spanish as "Buenhogar" and is published by Editorial Televisa.

The magazine advocated pure food as early as 1905, helping to lead to the 1906 Pure Food and Drug Act. It prohibited the advertising of cigarettes in the magazine in 1952, 12 years before the Surgeon General's warning labels were required on cigarette packs. During the 1930s, it endorsed the Ludlow Amendment, which sought to require that any declaration of war, except in the event of an invasion, be ratified by a direct vote of the citizenry.

From the Library of Congress: