From Infogalactic: the planetary knowledge core
Jump to: navigation, search
For other uses, see Goose (disambiguation).

Geese are waterfowl belonging to the tribe Anserini of the family Anatidae. This tribe comprises the genera Anser (the grey geese), Branta (the black geese) and Chen (the white geese). A number of other birds, mostly related to the shelducks, have "goose" as part of their names. More distantly related members of the family Anatidae are swans, most of which are larger than true geese, and ducks, which are smaller. 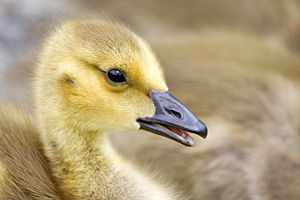 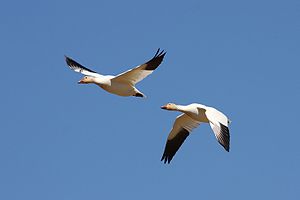 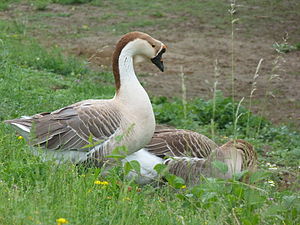 Chinese geese, the domesticated form of the swan goose

The three living genera of true geese are: Anser, grey geese, including the greylag goose, and domestic geese; Chen, white geese (often included in Anser); and Branta, black geese, such as the Canada goose.

Two genera of "geese" are only tentatively placed in the Anserinae; they may belong to the shelducks or form a subfamily on their own: Cereopsis, the Cape Barren goose, and Cnemiornis, the prehistoric New Zealand goose. Either these or, more probably, the goose-like Coscoroba swan is the closest living relative of the true geese.

Fossils of true geese are hard to assign to genus; all that can be said is that their fossil record, particularly in North America, is dense and comprehensively documents many different species of true geese that have been around since about 10 million years ago in the Miocene. The aptly named Anser atavus (meaning "great-great-great-grandfather goose") from some 12 million years ago had even more plesiomorphies in common with swans. In addition, some goose-like birds are known from subfossil remains found on the Hawaiian Islands.

Geese are monogamous, living in permanent pairs throughout the year; however, unlike most other permanently monogamous animals, they are territorial only during the short nesting season. Paired geese are more dominant and feed more, two factors that result in more young.[4] 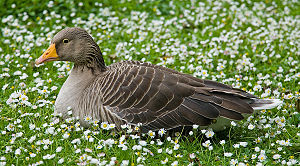 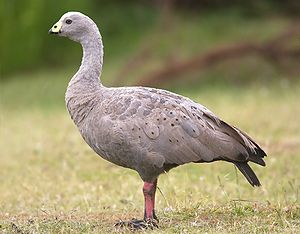 A number of mainly Southern Hemisphere birds are called "geese", most of which belong to the shelduck subfamily Tadorninae. These are:

The spur-winged goose, Plectropterus gambensis, is most closely related to the shelducks, but distinct enough to warrant its own subfamily, the Plectropterinae.

The blue-winged goose, Cyanochen cyanopterus, and the Cape Barren goose, Cereopsis novaehollandiae, have disputed affinities. They belong to separate ancient lineages that may ally either to the Tadorninae, Anserinae, or closer to the dabbling ducks (Anatinae).

The three species of small waterfowl in the genus Nettapus are named "pygmy geese". They seem to represent another ancient lineage, with possible affinities to the Cape Barren goose or the spur-winged goose.

The unusual magpie goose is in a family of its own, the Anseranatidae.

The northern gannet, a seabird, is also known as the "Solan goose", although it is a bird unrelated to the true geese, or any other Anseriformes for that matter. 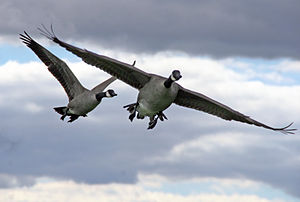 There are a number of well-known sayings regarding geese.

Saying that someone's "goose is cooked" means that they have suffered, or are about to suffer, a terrible setback or misfortune."

"Killing the goose that lays the golden eggs," derived from an old fable, means abusing or taking such extreme advantage of a favorable situation that conditions change and the situation is no longer favorable.

"A wild goose chase" that one goes on or sends someone else on is a useless, futile waste of time and effort.