From Infogalactic: the planetary knowledge core
Jump to: navigation, search
Not to be confused with Gorani language.

The Goranci (meaning "highlanders", [ɡɔrǎːntsi]; Serbian Cyrillic: Горанци) or Gorani (pronounced [ɡɔ̌rani]; Горани) are a Slavic Muslim ethnic group inhabiting the Gora region - the triangle between Kosovo,[lower-alpha 1] Albania, and the Republic of Macedonia. They number an estimated 60,000 people, and speak a transitional South Slavic dialect, called Našinski (simply meaning 'ours').

The ethnonym Gorani, meaning "highlanders", is derived from the Slavic toponym gora, which means "hill, mountain". Another autonym of this people is Našinci,[6] which literally means "our people, our ones".

They have been claimed by Bosniaks, Bulgarians, Macedonians and Serbs but the general view[according to whom?] is that they should be treated as a distinct minority group, which is their own view of themselves.[7][better source needed][8] By the last censuses at the end of 20th century in Yugoslavia they have declared themselves to be Muslims by nationality.[9]

In the mid-1980s, the Macedonian press labeled them Torbeši (Macedonian Muslims).[9]

In Albania, they are known by the Albanians with several exonyms, pejoratives, such as Bulgareci ("Bulgarians"),[10] Torbeshë ("bag carriers"), Poturë ("turkified", from po-tur, literally not Turk but, "turkified", used for Islamized Slavs)[11] and Goran.

The Gorani know of their Orthodox Christian origin.[12] They have historically worked as pečalbari (migrant workers), exclusively in cities, throughout the Ottoman Empire in cities such as Istanbul and Thessaloniki, among others.[13]

In Gora, the Gorani have mostly resisted "Bosniakization" through their insistence on having Serbian language in their schools.[14] In other areas of the Šar Mountains, Slavic Muslims declare either as Muslims by ethnicity or as Bosniaks.[citation needed] 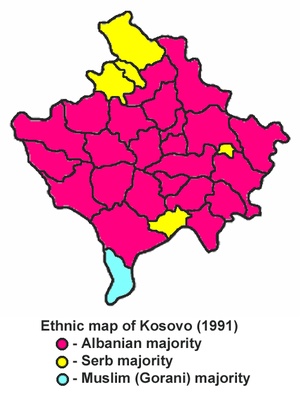 In Kosovo, the Gorani number 10,265 inhabitants,[2] which is drastically lower than before the Kosovo War. In 1998, it was estimated that their total population number was at least 50,000.[15]

Most Gorani state that the unstable situation and economic issues drive them to leave Kosovo. There is also some mention of threats and discrimination by ethnic Albanians.[16] The UN administration in Kosovo, UNMIK, has redrawn internal boundaries in the province in such a way that a Gorani-majority municipality no longer exists. The Gora municipality was combined with the neighboring Albanian-inhabited region of Opolje (some 20,000 people) into a new subdivision named Dragaš, which now has an Albanian majority.

Gora in the Middle Ages

After the split of the Roman Empire, the Balkans remained under the Eastern Roman Empire. The mountainous region of Gora was populated by Sklavenoi in the 6th and 7th centuries. The area was annexed by the Bulgarian Empire in the 9th century. The Byzantine Empire subsequently regained the region. By 1018, Basil II had established the Archbishopric of Ohrid, which included an eparchy in Brod, which held the whole Prizren region.[18] In the 1090s, Serbian Grand Prince Vukan (r. 1091–1112) raided Kosovo and along the Vardar,[19] including this region. In 1204, the region is briefly occupied by the Bulgarian Empire.[18] In 1215, Prizren and the neighbouring župas (counties) are under the rule of Serbian King Stefan the First-Crowned (r. 1196–1228).[18] In the beginning of the 14th century, during the Serbian Kingdom, a sevastokrator Pavle was the lord in Gora.[18] Serbian Emperor Stephen Dušan the Mighty (r. 1331-1355) granted (metochion) the settlement of Gora, along with seven other villages that are presently inhabited by Gorani, to the Monastery of the Holy Archangels in Prizren, in an edict dated to 1348. Jovan and Constantine Dragaš of the Dejanović family held the region prior to the first Ottoman conquests of Serbia, during the fall of the Serbian Empire.[18] Vuk Branković added Prizren, Gora and the other northern Šar župas to his district,[18] between 1371 (after the Battle of Maritsa) and 1378 (the death of Đurađ Balšić).[20]

In 1455, the southern territories of the Serbian Despotate were annexed by the Ottomans, and organized into the beylerbeylik of Rumelia. Gora became a nahiyah of the Sanjak of Prizren.[18] The Ottoman conquest resulted in the old trade routes that linked the Adriatic to the Aegean and Black sea losing their importance because of the insecurity on the roads, and the towns and villages along the roads stopped growing.[18] Gora initially successfully resisted Islamization.[18] The Ottoman defter from 1591 registers Gora as inhabited exclusively by Serbs, while Opolje to the north is Albanian populated.[21] The Habsburgs under General Piccolomini marched into Prizren and its surroundings in October 1689.[18] Gora supported the Habsburgs, in order to get rid of the Ottomans.[18] After the death of Piccolomini and abandonment of the Habsburg campaign, the region was recaptured by the Ottomans, and punitive atrocities were committed against the Serbian population, including Gora.[18] In the 18th century, a wave of Islamization began in Gora.[18] The Ottoman abolition of the Archbishoprics of Ohrid and Pech in 1766/1767 is thought to have prompted the Islamization of Gora as was the trend of many Balkan communities.[22] The settling of Albanians in the Prizren region began in 1815.[18] The last Christian Gorani, Božana, died in the 19th century - she has received a cult, signifying the Gorani's Christian heritage, collected by Russian consuls Anastasiev and Yastrebov in the second half of the 19th century.[18]

In the Kingdom of Serbia, the Gorani were exempted from taxes by royal decree due to their position and importance.[18] In the First Balkan War in 1912 the Serbian Army seized Gora. A minor part of the Gorani population migrated to Turkey as a result.[citation needed] In the 1916–1918 First World War the Gora was conquered by the Central Powers and assigned to the Bulgarian (until May 1916)[23] and to the Austro-Hungarian (until October 1918) zone. After 1918 they were integrated into the Kingdom of Serbs, Croats and Slovenes. The troubles during First World War, as well as the difficult period between 1919-20 were characterized by drought, causing famine and much poverty for the Gorani.[citation needed] This paradigm also incited migrations to Kosovo's larger city, Prizren and Tetovo in Macedonia. Disease and hunger in the post-communist era in Albania have caused a general downfall of the Gorani population, mostly due to in-migration out of villages for urban centers like Shkodra and Tirana.

In 1925, the final border between Serbia and Albania was demarcated by the decision of the League of Nations, on the demand of Fascist Italy. Over 15,000 Gorani now lived within Albania, in the villages of Borje, Cernalevë, Kosharisht, Novosoj, Orqiklje, Orgjost, Oreshkë, Pakisht, Shishtavec, Zapod, despite their desire to remain undivided with their kin.

In the 1939 census of Yugoslavia, the Gorani were in the category of "non-Slavs" shared by Albanians and Turks, probably due to their religion.[9] In 1949, ethnic Albanian officials in the Yugoslav government, headed by Fadil Hoxha, launched a forced assimilation plan for the Gorani,[18] and they managed to Albanianize the personal names of the Gorani (e.g. Hasanović - Hasani).[9][18]

In the 1971 and 1981 censuses, the majority of Gorani declared themselves as "Muslims by nationality".[9]

During the Kosovo War, the Gorani mostly supported the Serbian cause.[15] The Kosovo Liberation Army exercised particularly strong pressue on the Goranci, disallowing them to practise their language at schools and in everyday life in order to misrepresent them as Albanians.[24]

After the 1999 NATO bombing of Yugoslavia which began on March 24, the United Nations Interim Administration Mission in Kosovo (UNMIK) subsequently took over administration of AP Kosovo and Metohija. The Gora municipality was disestablished, and a new municipality was formed which joined Gora with neighbouring Albanian-inhabited Opolje into the new "Dragash" municipality, in which Albanians constituted the majority. In 1999, after the NATO bombings, Albanian attacks on Gora resulted in the death of 11 inhabitants; some 56 bomb attacks and other types were made.[25]

In 2007 the Kosovar provisional institutions opened a school in Gora to teach the Bosnian language, which sparked minor consternation amongst the Gorani population, added by the fact that the Principal declares as an Albanian. Many Gorani refuse to send their children to school for threats of assimilation and self-initially founded home schools for their young.

The Goranci are known for being "the best confectioners and bakers" in former Yugoslavia.[29]

The Slavs of Gora were Christianized in 870 following the Byzantine Empire's baptism of the Serbs and Bulgarians. The Ottomans conquered the region in the 14th century, which started the process of Islamization of the Gorani and neighbouring Albanians. However, the Gorani still tangentially observe some Orthodox Christian traditions, such as Slavas and Djurdjevden.

Traditional Gorani folk music includes a two-beat dance called "oro" ('circle'), which is a circle dance focused on the foot movements: it always starts on the right foot and moves in an anti-clockwise direction. The Oro is usually accompanied by instruments such as curlje, kaval, čiftelija or tapan, and singing is used less frequently in the dances than in those of the Albanians and Serbs.

The "national" sport of Pelivona is a form of Oil wrestling is popular among Gorani with regular tournaments being held in the outdoors to the accompaniment of Curlje and Tapan with associated ritualized hand gestures and dances, with origins in the Middle East through the Ottoman Empire's conquest of Balkans.

The "national" drink of the Gorani is Rakija which is commonly distilled at home by elderly people. Another popular drink is Turkish Coffee which is drunk in small cups accompanied by a glass of water. Tasseography is popular among all Gorani using the residue of Turkish Coffee. 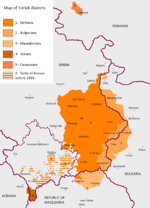 A geographical distribution of the Torlakian dialect with marked Gora area

The Gorani people speak South Slavic, a local dialect known as "Našinski" or "Goranski", which is part of a wider Torlakian dialect,[citation needed] spoken in Western Bulgaria, Southern Serbia and part of Macedonia. The Torlakian dialect is a transitional dialect of Bulgarian and Serbian whilst also sharing features with Macedonian. The Gorani speech is classified as an Old-Shtokavian dialect of Serbian (Old Serbian), the Prizren-Timok dialect. Bulgarian linguists classify the Gorani dialect as part of a Bulgarian dialectal area.[30] It has numerous loan words, being greatly influenced by Turkish, Albanian and Arabic due to the influence of Islam. It is similar to the Bosnian language because of the numerous Turkish loanwords. Gorani speak Serbo-Croatian in school.[9]

According to the last 1991 Yugoslav census, 54.8% of the inhabitants of the Gora municipality said that they spoke the Gorani language, while the remainder had called it Serbian.[31] Some Gorani scholars define their language as Bulgarian, similar to the Bulgarian dialects spoken in the north wester region of the Republic of Macedonia.[32] Some linguists, including Vidoeski, Brozovic and Ivic, identify the Slavic-dialect of the Gora region as Macedonian.[33] There are assertions that Macedonian is spoken in 50 to 75 villages in the Gora region (Albania and Kosovo).[34] According to some unverified sources in 2003 the Kosovo government acquired Macedonian language and grammar books for Gorani school.[35]

Albanian-Gorani scholar Nazif Dokle compiled the first Gorani–Albanian dictionary (with 43,000 words and phrases) in 2007, sponsored and printed by the Bulgarian Academy of Sciences.[32] In 2008 the first issue of a Macedonian language newspaper, Гороцвет (Gorocvet) was published.[36]

Example of a traditional Gorani song

Migrations from Gora during the Ottoman era resulted in two significant waves: the first towards Prizren and Sirinić, and the other towards Tetovo. The latter populated the Macedonian settlements of Dolno Palčište and Tearce. Their descendants still populate that part of Macedonia. Gorani colonists have migrated and populated the colonies of Urvič and Jelovjane on the eastern side of the Šar Mountains.[citation needed]

Gora is an underdeveloped region and for almost two centuries, its male inhabitants would go off to more distant regions in order to find work. Due to this, a true Gorani diaspora has come to life with many living in parts of Central Serbia (particularly Belgrade: 3,340), Vojvodina (606), Albania (primarily in Durres), Macedonia (particularly the Western parts); Bosnia and Herzegovina, Croatia, Italy (particularly Udine and Piana degli Albanesi), Greece, Turkey; and following escape from communist Albania and socialist Yugoslavia in the late-1940s, the United States of America (particularly New York and Los Angeles) and the United Kingdom (particularly Haringey, London), Birmingham and Wolverhampton.