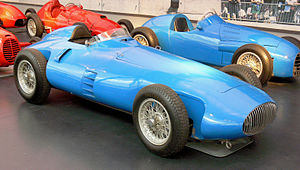 1950 Simca Gordini T15s, as raced, and retired, at the 1950 24 Hours of Le Mans by José Froilán González and Juan Manuel Fangio

Amédée Gordini tuned cars and competed in motor races since the 1930s. His results made Simca (the French assembler of Fiat) to hire him for its motorsport programme and to develop road cars. Their association continued after World War II.[4]

In 1946, Gordini introduced the first cars named after him, Fiat-engined single-seaters raced by him and Jose Scaron, achieving several victories. In the late 1940s the company opened a workshop at the Boulevard Victor in Paris, entering into sportcar and Grand Prix races.[5] Gordini and Simca started to diverge in 1951 because of political conflicts.[4]

Gordini competed in Formula One from 1950 to 1956 (with a brief return in 1957 with an eight cylinders engine), although it achieved a major success in Formula Two during that period.[5]

After its Formula One programme ended Gordini worked with Renault as an engine tuner, entering Renault-Gordini cars at the 24 Hours of Le Mans between 1962 and 1969. It also tuned engines for Alpine, a rival sports car manufacturer also associated with Renault. In 1957, Gordini and Renault manufactured the Dauphine Gordini, a modified version of the Renault Dauphine which was a sales success.[6] Gordini-tuned Renault cars also won various rallies during the 1950s and 1960s.[7] In 1963, the Gordini company planned to move its headquarters to Noisy-le-Roi. At the end of 1968, Gordini retired and sold a 70% majority stake from his firm to Renault.[8] Renault-Gordini was moved to Viry-Châtillon in 1969 and became a sport division of Renault, before be merged with Alpine to form Renault Sport in 1976.[3] On 1 January 1976, René Vuaillat became director of Gordini.[9] The Gordini company name became wholly owned by Renault in 1977.[8]

In November 2009, Renault announced that it would be reviving the Gordini name for an exclusive line of hot hatches, in a similar fashion to Fiat's revival of its Abarth name.[10] Modern models to bear the name include the Renault Twingo and the Renault Clio. 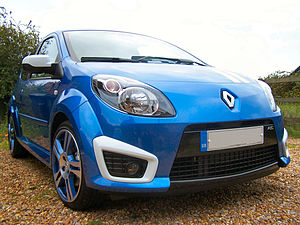 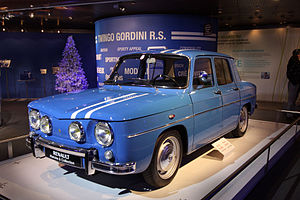 Since its early Renault models the most characteristic colour scheme of Gordini cars has been bleu de France (the French motor racing colour) with white stripes,[12] although different combinations have been used over the years.[13]