The Gordon Riots of 1780 began as an anti-Catholic protest in London against the Papists Act of 1778, which intended to reduce official discrimination against British Catholics. The protest evolved into riots and looting. 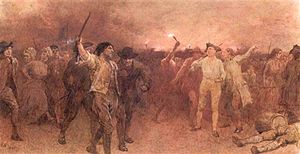 The Gordon Riots, by Charles Green

The Popery Act 1698 had imposed a number of penalties and disabilities on Roman Catholics in England; the 1778 Act eliminated some of these. An initial peaceful protest led on to widespread rioting and looting[1][2][3] and was the most destructive in the history of London.[4][5] Painted on the wall of Newgate prison was the proclamation that the inmates had been freed by the authority of "His Majesty, King Mob". The term "King Mob" afterwards denoted an unruly and fearsome proletariat.

The Riots came at the height of the American War of Independence, when Britain was fighting American rebels, France, Spain and the Dutch Republic. They led to unfounded fears that they had been a deliberate attempt by France to destabilise Britain before an imminent French invasion. 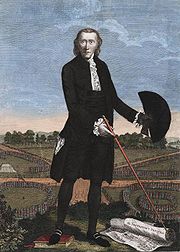 The stated intention of the Papists Act of 1778 was, as its preamble notes, to mitigate some of the official discrimination against Roman Catholics in the Kingdom of Great Britain. It absolved Catholics from taking the religious oath when joining the British Armed Forces as well as granting a few and limited liberties. There were strong expedient reasons for this change. British military forces at the time were stretched very thinly in what had become a global American War of Independence, with conflicts ongoing with France, Spain, and the new United States. The recruitment of Catholic people would be a significant help to address this shortfall of manpower.

The 1698 anti-Catholic laws had largely been ignored for many years and were rarely enforced. Because of this, many leading Catholics were opposed to the repeal of the Act, fearing it would stir up anti-Catholic sentiment for little practical return.[6] It was also pointed out that large numbers of Catholics, recruited in Ireland and the Scottish Highlands, were already serving in the military. In spite of this, the government decided to press ahead with the Bill, and had it introduced in Parliament by Sir George Savile.

The Protestant Association of London had the support of leading Calvinist religious figures, including Rowland Hill, Erasmus Middleton, and John Rippon.[7] Lord George Gordon became its President in 1779, in an effort to force the repeal of the Papists Act.[8][9] An articulate propagandist, though eccentric, Gordon inflamed the mob with fears of Papism and a return to absolute monarchical rule. He implied that Catholics in the military would, given a chance, join forces with their co-religionists on the Continent and attack Britain. He enjoyed popularity in Scotland where he took part in a successful campaign to prevent the same legislation from being introduced into Scottish Law, although the Act continued in force in England and Wales and in Ireland. The success in obstructing the law in Scotland led Gordon to believe he could enjoy similar success in the rest of Britain. Early in 1780 Gordon had several audiences with King George III but was unable to convince him of what he saw as the dangers of the Act. George III initially humoured Gordon, but grew increasingly irritated with him and eventually refused any future audiences.

The political climate deteriorated rapidly. On 29 May 1780, Gordon called a meeting of the Protestant Association, and his followers subsequently marched on the House of Commons to deliver a petition demanding the repeal of the Act.

After the first march to Parliament, further riots occurred involving groups whose grievances were nationalistic, economic, or political, rather than religious. Aside from the issue of Catholic emancipation, it has also been suggested that the driving force of the riots was Britain's poor economic situation: the loss of trade during the war had led to falling wages, rising prices, and periodic unemployment. As Rudé noted, there was no general attack on the Catholic community, "the victims of the riots" being distinguished by the fact they were "on the whole, persons of substance".[10] Voting in parliamentary elections was restricted by a property threshold, so most Londoners were unable to vote and many hoped for reforms to make Parliament more representative of the people.

Shortly after the riots had broken out, the Duke of Richmond suggested that they were directly attributable to the passing of the Quebec Act six years before, a concept that was ridiculed by many of his colleagues.[11] Another suggested cause was Britain's weakened international position, which had arisen from the country's isolation in Europe and the disappointing news coming from the ongoing war.[12] Some rioters were against the continuation of the war, and many strongly supported American independence, while others were angry that Britain's war effort was being mishandled by Lord North. In many cases a mix of issues blended together and drove people to take part in the rioting.

On 2 June 1780 a huge crowd, estimated at 40,000 to 60,000 strong, assembled and marched on the Houses of Parliament. Many carried flags and banners proclaiming "No Popery", and most wore blue cockades which had become the symbol of their movement. As they marched, their numbers swelled. They attempted to force their way into the House of Commons, but without success. Gordon, petition in hand, and wearing in his hat the blue cockade of the Protestant Association, entered the Commons and presented the petition. Outside, the situation quickly got out of hand and a riot erupted. Members of the House of Lords were attacked as they arrived, and a number of carriages were vandalised and destroyed.[13]

Despite being aware of the possibility of trouble, the authorities had failed to take steps to prevent violence breaking out. The Prime Minister, Lord North, had forgotten to issue an order mobilising the small number of Constables in the area. Those that were present in the House of Commons were not strong enough to take on the angry mob. Eventually a detachment of soldiers were summoned, and they dispersed the crowd without violence. Inside the House of Commons, the petition was overwhelmingly dismissed by a vote of 192 to 6.[14]

Once the mob around Parliament had dispersed, it seemed to the government that the worst of the disorder was over. However, the same night a crowd gathered and attacked the Roman Catholic Sardinian Embassy Chapel in Lincoln's Inn Fields.[15] Bow Street Runners and soldiers were called out and made thirteen arrests, although most of the ringleaders had managed to escape. The same night the chapel of the Bavarian Embassy in Warwick Street, Soho, was destroyed[16] and crowds caused random violence in streets known to house rich Catholics[citation needed]. 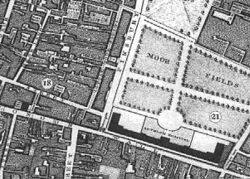 The area of Moorfields, one of the poorest parts of the city, was the home of many Irish immigrant workers and had a large area of open ground where crowds could assemble. Despite the appeal of a prominent Irish merchant, James Malo, to the Lord Mayor, Brackley Kennett, no additional protection was offered to the area. During 3 June a crowd had gathered in Moorfields, and by nightfall it began to go on the rampage. Malo's house was amongst the many to be sacked and burned.[17]

Newgate Prison was attacked and largely destroyed, as was The Clink.[18] This allowed large numbers of prisoners to escape, many of whom were never recaptured. Severe destruction was inflicted on Catholic churches and homes and chapels on the grounds of several embassies, as well as on the Bank of England, Fleet Prison, and the house of the Lord Chief Justice, William Murray, 1st Earl of Mansfield. 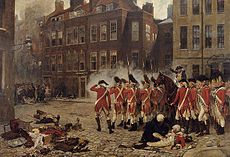 The Gordon Riots, depicted in a painting by John Seymour Lucas

The army was called out on 7 June and given orders to fire upon groups of four or more who refused to disperse. About 285 people were shot dead, with another 200 wounded. Around 450 of the rioters were arrested. Of those arrested, about twenty or thirty were later tried and executed. Gordon was arrested and charged with high treason, but was found not guilty. Brackley Kennett, the Lord Mayor, was convicted of criminal negligence for not reading out the Riot Act and given a £1,000 fine.[19] The military units which dealt with the rioters included the Horse Guards, Foot Guards, Inns of Court Yeomanry, the Honourable Artillery Company, line infantry[20] including the Queen's Royal Regiment (West Surrey), and militia brought in from neighbouring counties. The defence of the Bank of England was conducted by the 9th (East Norfolk) Regiment of Foot under the command of Thomas Twisleton, 13th Baron Saye and Sele.

The Riots damaged the reputation of Britain across Europe, where many saw British constitutional monarchy as an inherently unstable form of government. This came at a time when Britain was searching for allies, particularly Catholic Austria, in the American War of Independence to challenge the strong coalition the French had built.[21] After hearing of the riots, the Spanish government broke off peace negotiations with Britain, believing that the disorder would lead to a widespread collapse of Britain and wishing to take advantage of it.

The riots highlighted the problems Britain faced by not deploying a professional police force, a notion which was opposed as it was considered foreign and absolutist. The Earl of Shelburne shocked many the day after the riots broke out by proposing in parliament that Britain should consider forming a force modeled on the French police.[22] [23]

The riots destroyed the popularity of radical politician John Wilkes, who led troops against the rioters. Many of his followers saw this as a betrayal; some of them may have been among the rioters.

The events at the Bank of England started a tradition where a detachment of soldiers, usually from the Brigade of Guards would march to the bank to perform security duties. Until 1963 the duty was performed by the Guards in Home Service Dress with bearskin, though tennis shoes were worn inside the bank. From that date until 31 March 1973 the detachment became more functional than ceremonial, doing their duties in service dress with automatic weapons.[24]

In Bernard Cornwell's Sharpe series of novels, the protagonist Richard Sharpe's mother was killed during the riots when he was three.

Miranda Hearn's 2003 historical novel A Life Everlasting depicts the main protagonists caught up in the riots as innocent Londoners.