Gore-Tex is a waterproof, breathable fabric membrane and registered trademark of W. L. Gore and Associates. Invented in 1969, Gore-Tex is able to repel liquid water while allowing water vapor to pass through, and is designed to be a lightweight, waterproof fabric for all-weather use. It is composed of stretched polytetrafluoroethylene (PTFE), which is more commonly known as the generic trademark Teflon.

Prior to Gore-Tex, stretched polytetrafluoroethylene (PTFE) tape was produced in 1966 by John W. Cropper of New Zealand. He had developed and constructed a machine for this use. However, Cropper chose to keep the process of creating expanded PTFE as a closely held trade secret and as such, it remained unpublished. As a public patent had not been filed, the new form of the material could not be legally recognised.[1][2]

Gore-Tex was co-invented by Wilbert L. Gore and Gore's son, Robert W. Gore.[3] In 1969, Bob Gore stretched heated rods of PTFE and created expanded polytetrafluoroethylene (ePTFE). His discovery of the right conditions for stretching PTFE was a happy accident, born partly of frustration. Instead of slowly stretching the heated material, he applied a sudden, accelerating yank. The solid PTFE unexpectedly stretched about 800%, forming a microporous structure that was about 70% air.[3] It was introduced to the public under the trademark Gore-Tex.[4] Bob Gore promptly applied for and obtained the following patents:

In the 1970s Garlock, Inc. allegedly infringed Gore's patents and was sued by Gore in the Federal District Court of Ohio. The District Court held Gore's patents to be invalid after a "bitterly contested case" that "involved over two years of discovery, five weeks of trial, the testimony of 35 witnesses (19 live, 16 by deposition), and over 300 exhibits" (quoting the Federal Circuit). On appeal, however, the Federal Circuit disagreed in the famous case of Gore v. Garlock, reversing the lower court's decision on the ground, as well as others, that Cropper forfeited any superior claim to the invention by virtue of having concealed the process for making ePTFE from the public, thereby establishing Gore as the legal inventor.[1]

Since the expiration of the main Gore-Tex patent, several other products have come to market with similar characteristics that use similar technology.[5] As a cheaper alternative to the more expensive membranes, there are also waterproof/breathable coatings which are less durable.[6][7]

For his invention, Robert W. Gore was inducted into the U.S. National Inventors Hall of Fame in 2006.[8]

PTFE is made using an emulsion polymerization process that utilizes the carcinogenic fluorosurfactant PFOA,[9][10] a persistent environmental contaminant. In 2013, Gore eliminated the use of PFOAs in the manufacture of its weatherproof functional fabrics.[11] 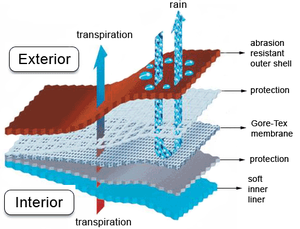 Schematic of a composite Gore-Tex fabric for outdoor clothing

Gore-Tex materials are typically based on thermo-mechanically expanded PTFE and other fluoropolymer products. They are used in a wide variety of applications such as high-performance fabrics, medical implants, filter media, insulation for wires and cables, gaskets, and sealants. However, Gore-Tex fabric is best known for its use in protective, yet breathable, rainwear. 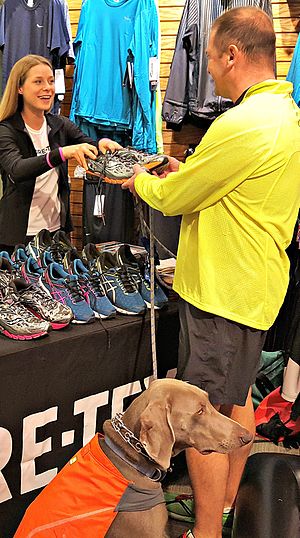 The simplest sort of rain wear is a two layer sandwich. The outer layer is typically nylon or polyester and provides strength. The inner one is polyurethane (abbreviated: PU), and provides water resistance, at the cost of breathability.

Early Gore-Tex fabric replaced the inner layer of PU with a thin, porous fluoropolymer membrane (Teflon) coating that is bonded to a fabric. This membrane had about 9 billion pores per square inch (around 1.4 billion pores per square centimeter). Each pore is approximately 1/20,000 the size of a water droplet, making it impenetrable to liquid water while still allowing the more autonomous water vapour molecules to pass through. 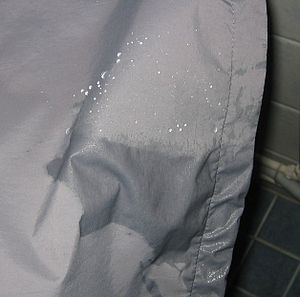 Both wear and cleaning will reduce the performance of Gore-Tex clothes by wearing away the Durable Water Repellent (DWR) treatment on the surface of the fabric. The DWR prevents the face fabric from becoming wet and thus reducing breathability. However, the DWR is not responsible for the jacket being waterproof. This is a common misconception, so when the face fabric becomes soaked due to an absence of DWR, there is no breathability and the wearer's sweat will cause condensation to form inside the jacket. This may give the appearance that a jacket is leaking when it is not. The DWR can be reinvigorated by tumble drying the garment or ironing on a low setting.[12]

Gore requires that all garments made from their material have taping over the seams, to eliminate leaks. Gore's sister product, Windstopper, is similar to Gore-Tex in being windproof and breathable, but has ability to stretch and is not waterproof. The Gore naming system does not imply specific technology or material but instead specific set of performance characteristics.[13]

Gore-Tex membrane under an electron microscope

Gore-Tex is also used internally in medical applications, because it is nearly inert inside the body. In addition, the porosity of Gore-Tex permits the body’s own tissue to grow through the material, integrating grafted material into the circulation system.[14] Gore-Tex is used in a wide variety of medical applications, including sutures, vascular grafts, heart patches, and synthetic knee ligaments, which have saved thousands of lives.[15]

Gore-Tex has been used for many years in the conservation of illuminated manuscripts.[16]

Explosive sensors have been printed on Gore-Tex clothing leading to the sensitive voltammetric detection of nitroaromatic compounds.[17]

The "Gore-Tex" brand name was formerly used for industrial and medical products.[18][19]