Gorm the Old (Danish: Gorm den Gamle, Old Norse: Gormr gamli, Latin: Gormus Vetus), also called Gorm the Languid (Danish: Gorm Løge, Gorm den Dvaske), was the first historically recognized King of Denmark, reigning from c.  936 to his death c.  958.[1] He ruled from Jelling, and made the oldest of the Jelling Stones in honour of his wife Thyra. Gorm was born before 900 and died c.  958.[1]

Gorm is the reported son of semi-legendary Danish king Harthacnut. Chronicler Adam of Bremen says that Harthacnut came from Nortmannia to Denmark and seized power in the early 10th century.[2] He deposed the young king Sigtrygg Gnupasson, reigning over Western Denmark.[1] When Harthacnut died, Gorm ascended the throne.

Heimskringla reports Gorm taking at least part of the kingdom by force from Gnupa, and Adam himself suggests that the kingdom had been divided prior to Gorm's time. Gorm is first mentioned as the host of Archbishop Unni of Hamburg and Bremen in 936.[2] According to the Jelling Stones, Gorm's son, Harald Bluetooth, "won all of Denmark", so it is speculated that Gorm only ruled Jutland from his seat in Jelling.[2] 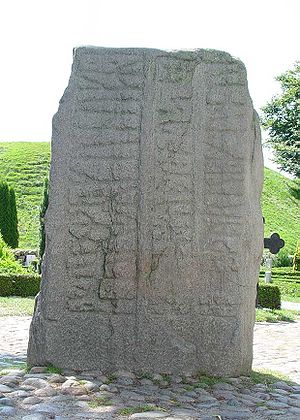 Runic stone for Thyra, back side

Gorm married Thyra, who is given conflicting and chronologically dubious parentage by late sources, but no contemporary indication of her parentage survives. Gorm raised one of the great burial mounds at Jelling as well as the oldest of the Jelling Stones for her, calling her tanmarkar but ("Denmark's Salvation" or "Denmark's Adornment"). Gorm was the father of three sons, Toke, Knut and Harald, later King Harald Bluetooth.[3]

His wife, Thyra, is credited with the completion of the Danevirke, a wall between Denmark's southern border and its unfriendly Saxon neighbors to the south. The wall was not new, but it was expanded with a ditch and earthen foundation topped by a timber stockade above it. The Danevirke ran between the Schlei and the Treene river, across what is now Schleswig.[4]

Gorm died in the winter of 958–959[3] and dendrochronology shows that his burial chamber was made from wood of timbers felled in 958.[5] Arild Huitfeldt explains how in Danmarks Riges Krønike:[citation needed] 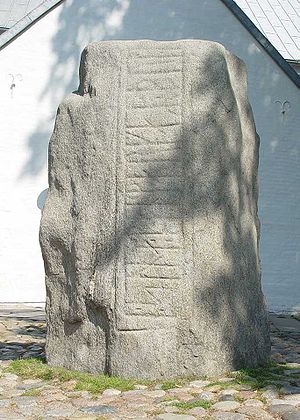 Runic stone for Thyra, front side

The three sons were Vikings in the truest sense, departing Denmark each summer to raid and pillage. Harald came back to the royal enclosure at Jelling with the news that his son Canute had been killed in an attempt to capture Dublin, Ireland. Canute was shot with a coward's arrow while watching some games at night. No one would tell the king in view of the oath the king had made. Queen Thyra ordered the royal hall hung with black cloth and that no one was to say a single word. When Gorm entered the hall, he was astonished and asked what the mourning colors meant. Queen Thyra spoke up: "Lord King, you had two falcons, one white and the other gray. The white one flew far afield and was set upon by other birds which tore off its beautiful feathers and is now useless to you. Meanwhile the gray falcon continues to catch fowl for the king's table." Gorm understood immediately the Queen's metaphor and cried out, "My son is surely dead, since all of Denmark mourns!" "You have said it, your majesty," Thyra announced, "Not I, but what you have said is true." According to the story Gorm was so grieved by Canute's death that he died the following day.

This account would contradict information on the Jelling Stones which point to Queen Thyra dying before Gorm. Some archaeologists and historians have suggested that Gorm was buried first in Queen Thyra's grave mound at Jelling, and later moved by his son, Harald Bluetooth, into the original wooden church in Jelling.[1] According to this theory it is believed, that the skeleton found at the site of the first Christian church of Jelling is in fact Gorm the Old, though the theory is still much debated. During the reign of Gorm, most Danes still worshipped the Norse gods, but during the reign of Gorm's son, Harold Bluetooth, Denmark officially converted to Christianity. Harald, accordingly, left the hill where Gorm had originally been interred as a memorial.

Gorm was "old" in the sense that he has always been considered the traditional ancestral "head" of the Danish monarchy. The custom at the time was to give nicknames to individuals, long before the use of surnames. Nicknames fell into several categories: names based on an event, names based on a physical characteristic, names based on a pun, and names listing a characteristic that was the opposite of the character of the person given that name, in essence, a joke nickname. For example, Gorm the Languid was not at all languid; he was watchful. Gorm the Old did not live an especially long life, but his rule of 40 years, from c. 900 to c. 940, is the longest of any Danish Viking monarch. Saxo Grammaticus in the Gesta Danorum asserts that Gorm was older than other monarchs and having lived so long was blind by the time his son Canute was killed. Records of earlier kings either were not available or discounted by royal historians. Gorm's name appears on the Jelling Stones and that was the definitive proof historians of the past needed.