A gorsedd /ˈɡɔːrsɛð/ plural gorseddau, is a community or coming together of modern-day bards. The word is of Welsh origin, meaning "throne". It is often spelled gorsedh in Cornwall and goursez in Brittany, reflecting the spellings in the Cornish and Breton languages, respectively.

When the term is used without qualification, it usually refers to the national Gorsedd of Wales, namely Gorsedd Beirdd Ynys Prydain,[1] meaning "The Gorsedd of Bards of the Island of Britain". However, other gorseddau exist, such as the Cornish Gorsedh Kernow[2] and the Breton Goursez Vreizh.[3] 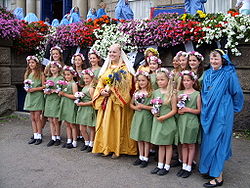 Gorseddau exist to promote literary scholarship and the creation of poetry and music.[4] As part of this, their most visible activity can be seen at Eisteddfodau – Welsh language festivals. 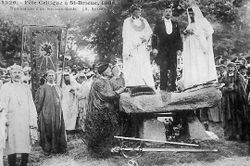 Gorsedd Beirdd Ynys Prydain was founded in 1792 by Edward Williams, commonly known as Iolo Morganwg, who also invented much of its ritual, supposedly based on the activities of the ancient Celtic Druidry.[5] Nowadays, much of its ritual has Christian influence, and were given further embellishment in the 1930s by Archdruid Cynan (1950–1954).[citation needed] The Gorsedd y Beirdd made its first appearance at the Eisteddfod at the Ivy Bush Inn in Carmarthen in 1819, and its close association with the Festival has remained. It is an association of poets, writers, musicians, artists and individuals who have made a significant and distinguished contribution to Welsh language, literature, and culture.

The fictitious origin of these ceremonies was established by Professor G.J.Williams in works touching on Iolo Morgannwg.[6]

There are three ranks of membership in the Welsh Gorsedd. Until 2012 they were, in ascending order of honour:

However, since 2012 all these ranks are treated as equal, with new members all being called 'Druids' and with the colour of their robes reflecting the area of their contribution rather than an ascending order of honour. The head of a Gorsedd is known as an Archdderwydd (English: Archdruid), and wears a golden robe, and is elected for a term of three years, and is responsible for conducting the Gorsedd ceremonies during Eisteddfod week. These ceremonies are held to honour literary achievements amongst Welsh poets and prose writers. The ranks within the Breton Gorsedd (Goursez) are the same.

In the Cornish Gorsedd (Gorsedh Kernow), there is only one rank, that of bard, and all robes are blue.[8]

In the Welsh Gorsedd, a person may become an ovate or a bard by passing an examination in the Welsh language.[9] Druids may only be nominated by existing druids. Often a new inductee will take a pseudonym, called a "bardic name." To become an Archdruid, an individual must have won one of the Eisteddfod's three highest awards: the Crown, the Chair, or the Literature Medal. In 2003, Robyn Lewys (Robin Llŷn) became the first winner of the Literature Medal to be elected Archdruid, and the first Archdruid to be elected by a vote of all Gorseddogion.

People are also made ovates or druids as an honour to reward their contributions to Welsh culture. In 1946, the future Queen Elizabeth II was inducted into the Welsh Gorsedd at the National Eisteddfod of Wales.[10] In recent years, Ron Davies,[11] Rowan Williams,[12] Matthew Rhys,[13] Ioan Gruffudd[14] and Rebecca Evans[15] have been honoured in this way.

Three Gorsedd ceremonies are held during the Eisteddfod week:

During these ceremonies, the Archdruid and the members of the Gorsedd gather on the Eisteddfod stage in their ceremonial robes. When the Archdruid reveals the identity of the winning poet, the 'Corn Gwlad' (a trumpet) calls the people together and the Gorsedd Prayer is chanted (the Corn Gwlad symbolically calls everyone from the four corners of Wales). The Archdruid partially withdraws a sword from its sheath three times, and cries "A oes heddwch?" ("Is there peace?"), to which the assembly reply "Heddwch" ("Peace"). The sword is then placed fully back into its sheath, and hence is never drawn fully. Then the Horn of Plenty is presented to the Archdruid by a young local married woman, who urges him to drink the 'wine of welcome'. A young girl presents him with a basket of 'flowers from the land and soil of Wales' and a floral dance is performed, based on a pattern of flower gathering from the fields.

The symbol commonly used to represent a Gorsedd is a triple line, the middle line upright and the outer two slanted towards the top of the centre, thus: /|\.[16] This symbol, called "awen", is often explained as representing the sun.[8] The word "awen" means "muse" in Welsh.