From Infogalactic: the planetary knowledge core
Jump to: navigation, search
For other uses, see Gorton (disambiguation).

Gorton is an area of the city of Manchester, in North West England. The total population of Gorton Wards taken at the 2011 census was 36,055.[1][2] It is located to the southeast of Manchester city centre. Neighbouring areas include Longsight and Levenshulme.

According to local folklore, Goreton derives its name "Gore Town" due to a battle between the Saxons and Danes nearby.[3][4] This has been dismissed by historians as "popular fancy".[5] The name Gorton means "dirty farmstead",[6] perhaps taking its name from the Gore Brook, or dirty brook, which still runs through the township to-day. The brook may have acquired that name because of the dirty appearance of its water, perhaps caused by discolouration due to peat or iron deposits.[7]

In medieval times the district was a township of the ancient parish of Manchester in the Salford Hundred of Lancashire.

Manchester City F.C. was founded as St. Mark's (West Gorton) in 1880. The club was formed with the aim of binding the local community and to combat a form of gang warfare called scuttling that existed during the 1870s.[8][9] The rector's daughter, Anna Connell, is widely credited as the founder, however churchwarden William Beastow is believed to be the person who played the main part in creating sporting activities for the parish. In 1875 St. Mark's Cricket Club are known to have played and this evolved into the football club later in the decade.[10] The first recorded football game was played in November 1880.[11]

A Blackfoot Sioux chief named Charging Thunder came to Salford at age 26 as part of Buffalo Bill's Wild West Show in 1903 . Like many Lakota tribesmen, Charging Thunder was an exceptional horseman and performed thrilling stunts in Buffalo Bill's show in front of huge crowds, on the site of what is now the Lowry in Salford Quays. But when the show rolled out of town, he remained in London. He married Josephine, an American horse trainer who had just given birth to their first child, Bessie and together they settled in Darwen, before moving to Gorton. His name was changed to George Edward Williams, after registering with the British immigration authorities to enable him to find work. Williams ended up as an elephant keeper at the Belle Vue Zoo. He died on 28 July 1929 from pneumonia at age fifty-two. His interment was in Gorton's cemetery.

Most of the 19th-century Victorian houses around Gorton were demolished during the 1960s, and many people were moved to new overspill housing estates in other parts of the city. However, some people remained in Gorton and were placed in new council houses and flats.

Myra Hindley grew up in Gorton.[12] She and Ian Brady lived there at the time of the first three Moors murders, before moving to Hattersley where they committed two further murders and were arrested in October 1965. Their first victim, Pauline Reade (who died in July 1963 aged 16, but whose body was not found for 24 years), was a Gorton resident[13] as was third victim, Keith Bennett; last seen alive on 16 June 1964 aged 12. His body has yet to be found.[14]

In 2006 the Motor Insurers' Bureau named West Gorton as the worst place in the UK for uninsured cars, with over six times the national average of drivers living there having no cover.[15] However the MIB press release of 24 September 2009 stated that Barkerend in Bradford was then the worst place for uninsured drivers with Manchester the second worst city. The MIB do not reveal checkable details of the methods used to calculate the figures. source www.mib.org.uk

More recently some parts of Gorton have suffered from serious deprivation, which has resulted in high crime levels and burglary. The first four series of popular television series Shameless, which is shown on Channel 4 was mainly filmed in West Gorton. The parade of shops used for filming in the initial series was built on the site of St. Mark's Church, Clowes Street – the birthplace of Manchester City F.C.[16]

The teenager Jordan Brennan died after being attacked outside a grocer's store in Gorton on 10 March 2014.[17]

Abbey Hey is also a locality within Gorton. It is mostly a residential district, but also well-known locally as the location of Wright Robinson College and Manchester Vacs.

Gorton is home to Gorton Monastery, a Franciscan, 19th-century High Victorian Gothic Monastery. In recent years this has been renovated and has been secularised: it was previously derelict after the friars moved out. The parish left by the Friars came under the care of the Diocese of Salford. St Francis of Assisi RC Church on Textile Street, Gorton and Sacred Heart Church, Levenshulme Road, Gorton now form part of the RC Parish of Sacred Heart and St. Francis see www.catholicgorton.co.uk Other churches in Gorton which were designed by notable architects include the Brookfield Unitarian Church on Hyde Road, built by Richard Peacock (see "Brookfield Church Memorabilia".<templatestyles src="Module:Citation/CS1/styles.css"></templatestyles>) and the Mount Olivet Apostolic Church (originally the Anglican church of Our Lady of Mercy and St Thomas of Canterbury) on Mount Road, which was built by Walter Tapper in 1927.[18]

In 2006, Manchester City Council started a multimillion-pound redevelopment of the Gorton District Shopping Centre. The small market and retail area was demolished and work started in late 2007 to construct a brand new market hall and a new Tesco Extra hypermarket on this site. In July 2008, the new Manchester Gorton Market Hall was opened to the public. The construction of the new hypermarket and neighbouring petrol station continued, and in late October 2008 the new Tesco Extra store opened its doors for trading on 27 October 2008. Further retail outlets are to be developed near this site along Hyde Road, such as a Subway sandwich shop and Coral bookmakers which opened next to the Tesco Extra in 2009.[citation needed] 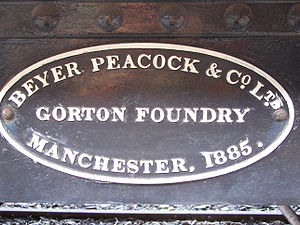 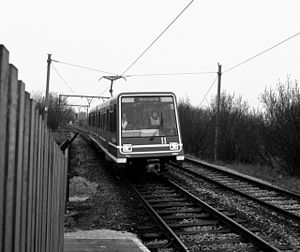 Gorton railway station opened in 1842 as Gorton and Openshaw and was replaced in 1906. It is still in operation today on the Hope Valley Line and is served by train services between Manchester Piccadilly and Glossop/Hadfield.[19] The station is mentioned in the 1964 song "Slow Train" by Flanders and Swann, referred to as "Openshaw". There are also stations at Belle Vue and Ryder Brow

Another railway station in the Gorton area was Hyde Road which opened in 1882 on the ill-fated Fallowfield Loop railway line; both the station and the line closed to passengers in 1958. Hyde Road station had a brief revival in 1987 when it played an important role in the early development of the Manchester Metrolink system. A temporary station called Debdale Park was constructed on the site of the Hyde Road station to host a public exhibition of "Project Light Rail", in which a train on loan from the fledgling Docklands Light Railway system in London was driven along a short stretch of track to demonstrate the light rail/tram network in Manchester being planned. This was the first ever light rail vehicle seen in operation in Manchester. Soon after the demonstration, the Fallowfield line was dismantled and has since been converted by Sustrans into a cycle track, the Fallowfield Loop, which runs from Debdale Park to St Werburgh's Road Metrolink station in Chorlton-cum-Hardy.[20][21]

In 1849 a locomotive works was built for the Manchester, Sheffield and Lincolnshire Railway, later the Great Central Railway. It was known locally as the "Gorton Tank". It carried out repairs and major overhauls, producing new boilers and all LNER castings. There was also a carriage and wagon works which had been built in 1881 which carried out light repairs. Both were closed in 1962.[22] Gorton was also the home of the Beyer-Peacock locomotive Company at Gorton Foundry, from 1854, until it closed in 1966. One of the company's partners, Richard Peacock subsequently became Liberal M.P for Gorton in the 1885 general election.

The former municipal borough of Manchester was created in 1838 and elevated to a city in 1853. Part of Gorton township was included in the city in 1890. The remaining part of the township became an Urban District of the administrative county of Lancashire in 1894. A small part of the urban district was transferred to the city of Manchester in 1901 and the remaining area was fully incorporated into Manchester in 1909.

The Gorton Philharmonic Orchestra was founded in 1854 and is an amateur orchestra.[23] The folk comedy group Gorton Tank were based in Gorton and were popular in the Manchester area. The actor John Thaw, who is perhaps best known for his role as Inspector Morse, was born in West Gorton.[24] The painter Michael Gutteridge was also born in Gorton. The Gorton Morris Men were responsible for reviving the rushcart ceremony in Gorton.[25]

Manchester City F.C. were founded as St. Mark's (West Gorton) in 1880 and many of their footballers, such as Billy Meredith and Tommy Johnson lived in the area.[26] Meredith was married at St. Mark's Church and lived on Clowes Street itself for a while. The much less notable Abbey Hey F.C. club is in Gorton; Gorton is the birthplace of former England and Manchester United footballer, Nicky Butt. "Bouncing Billy Barker" was a local man who specialised in jumping feats.[27] The former England and Lancashire cricketer's Bob Berry and Brian Statham were both born in Gorton. Gorton has also been the birthplace of three Olympians, Jeff Williams a cyclist who went to the 1980 Olympics, Thomas Evenson (athletics, silver medallist in the 3000 metres steeplechase at Los Angeles in 1932) and George Wilkinson a former water polo three time Olympic champion.[28]