Gortyn, Gortys or Gortyna (Greek: Γόρτυν, Γόρτυς, or Γόρτυνα, pronounced [ˈɣortina]) is a municipality and an archaeological site on the Mediterranean island of Crete, 45 km away from the modern capital Heraklion. The seat of the municipality is the village Agioi Deka.[2] Gortyn, the Roman capital of Creta et Cyrenaica, was first inhabited around 3200 BC[citation needed].

It is located in the valley of Messara in the south of the Psiloritis mountain, in the current position of the settlements of Metropolis and Agioi Deka, and near the Libyan Sea.

The municipality Gortyna was formed at the 2011 local government reform by the merger of the following 4 former municipalities, that became municipal units:[2] 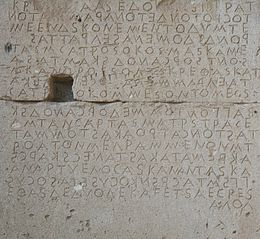 Fragmentary boustrophedon inscription (code of law) in the agora of Gortyn. 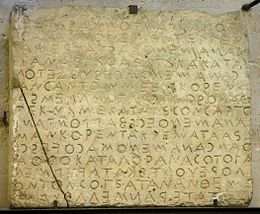 Inheritance regulations, fragment of the 11th column of the Law Code of Gortyn, Louvre.

There is evidence of human occupation in Gortyn as far back as the Neolithic era (7000 BC). Many artifacts have been found from the Minoan period, as well as some from the Dorian (circa 1100 BC). Although it is disputed whether the city was in development during the Minoan period, it is true that the city was in existence during the heroic times, because it is referenced by Homer,[3] among the cities of Crete that were flourishing and were well fortified. The city was complimented by Plato[4] and many others. The city of Gortyn surpassed the prominence of Phaistos during the first millennium BC,[5] Phaistos having been the most significant city on Crete during Minoan times. The period of its great prosperity, however, coincided with the Hellenistic era. Gortyn was the most powerful and prosperous city of Crete and took hegemony of the island, dominating the entire valley from Messara to Levina and, later in the 2nd century after the destruction of Phaistos, extended its power to Matala.

Gortyn had excellent relations with Ptolemy IV of Egypt, and experienced a new period of prosperity during the Roman period. As it had allied with the Romans, it avoided the disaster that happened to many other Cretan cities, when invaded by Quintus Caecilius Metellus Creticus in 68 BC.

Gortyn continued to rise under Roman rule, and became the capital of the joint province of Creta et Cyrenaica. From the 4th century it was the capital of a separate province of Crete. The city was destroyed in ca. AD 828 by invading Arabs, who established their own state on the island. One of the first Christian temples was built here and the remains of an important Christian cathedral of Crete can still be seen today. This cathedral, dedicated to St. Titus, the first Bishop of Crete, was erected in the 6th century AD.[6] Built with large isodomic stones, this cathedral keeps its intended height only in the areas of the Holy Bema and in pastophoria. The church structure is a cruciform with a dome which is based on four pillars.

Excavations of Gortyn were begun in 1884 by the Italian School of Archaeology at Athens. The excavations showed that Gortyn was inhabited from the Neolithic age. Ruins of a settlement on the citadel of Gortyn, were discovered and dated back to 1050 BC, their collapse dating to the seventh century BC. Later the area was fortified with a wall. At the top of the hill in the citadel a temple was found dating to the 7th century BC. In this area two embossed plates were found, along with several other sculptures and paintings. Daedalic plastic and many other clay figurines, black and red figure paintings and plenty of pottery, especially the type called kernos, were found in the temple. Graves dating to the geometric age were found on the south side of the citadel. Regarding the lower town, the excavation uncovered the position of the Agora (market) and the temple of Pythian Apollo, which is 600 meters from the Agora. At the foot of Prophet Elias are traces of a sanctuary of Demeter. Lua error in Module:Coordinates at line 668: callParserFunction: function "#coordinates" was not found.

The heart of Roman Gortyn is the Praetorium, the seat of the Roman Governor of Crete. The Praetorium was built in the 1st century AD, but it was altered significantly over the next eight centuries. In the same area, between the Agora and the temple of Apollo are the ruins of the Roman baths (thermae), as well as the temple of Apollo, an honorary arch, and the temple of the Egyptian deities with the worship statues of Isis, Serapis and Anubis. Parts of the Roman settlement, such as the theater (2nd century AD), have been unearthed during excavations. The theater has two entrances and a half-circular orchestra, the outline of which may still be seen today. Behind the Roman Theater are what has been called the "Queen of the Inscriptions". These inscriptions are the laws of the city of Gortyn, which are inscribed in the Dorian dialect on large stone slabs and are still plainly visible.

The law code of Gortyn

Among archaeologists, ancient historians, and classicists Gortyn is known today primarily because of the 1884 discovery of the Gortyn Code which is both the oldest and most complete known example of a code of ancient Greek law.[7][8] The code was discovered on the site of a structure built by the Roman emperor Trajan, the Odeon, which for the second time, reused stones from an inscription-bearing wall that also had been incorporated into the foundation of an earlier Hellenistic structure. Although portions of the inscriptions have been placed in museums such as the Louvre in Paris, a modern structure at the site of the mostly ruined Odeon now houses many of the stones bearing the famous law code."

A copy of the code has been returned to Athens by the Italian Museum in Taranto and is now housed in the Greek Bouli. The curator of the Taranto Museum spoke in Greek and told the famous and political guests that, "Greece is not part of Europe, it is Europe."

The myth of Europa and Zeus

Classical Greek mythology has it that Gortyn was the site of one of Zeus' many affairs. This myth features the princess Europa, whose name has been applied to the continent, Europe. Disguised as a bull, Zeus abducted Europa from Lebanon and they had an affair under a plane tree (platanus),[9] a tree that may be seen today in Gortys. Following this affair three children were born, Minos, Rhadamanthys and Sarpedon, who became the kings of the three Minoan Palaces in Crete. The identification of Europa in this myth gives weight to the claim that the civilization of the European continent was born on the island of Crete. A colossal statue of Europa sitting on the back of a bull was discovered at the amphitheatre in Gortyn in the nineteenth century and is now in the collections of the British Museum.[10] Many coins were found with Europa representations on the back, showing that the people honored Europa as a great goddess.

Gortyn and The Odyssey

According to Book III of Homer's The Odyssey, Menelaus and his fleet of ships, returning home from the Trojan War, were blown off course to the Gortyn coastline. Homer describes stormy seas that pushed the ships against a sharp reef, ultimately destroying many of the vessels but sparing the crew.