Farmland in the Town of Goshen

The Town of Goshen contains a village also called Goshen, the county seat of Orange County. The town is centrally located in the county. 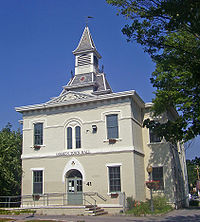 Goshen Town Hall, in the village of Goshen

The region was important in the development of harness racing.

It is the birthplace of the former Army Chief of Staff, and current Chairman of the Joint Chiefs of Staff, General Martin Dempsey.

There were 4,074 households out of which 35.4% had children under the age of 18 living with them, 60.2% were married couples living together, 8.1% had a female householder with no husband present, and 28.5% were non-families. 24.4% of all households were made up of individuals, and 11.9% had someone living alone who was 65 years of age or older. The average household size was 2.73 and the average family size was 3.27.

Communities and locations in the Town of Goshen