The Gospel of Mary is an apocryphal book discovered in 1896 in a 5th-century papyrus codex. The codex Papyrus Berolinensis 8502 was purchased in Cairo by German scholar Karl Reinhardt.

Although the work is popularly known as the Gospel of Mary, it is not canonical nor is it technically classed as a gospel by scholastic consensus. For example, Andrew Bernhard notes in his text-critical edition of non-canonical gospels that "the term 'gospel' is used as a label for any written text that is primarily focused on recounting the teachings and/or activities of Jesus during his adult life".[1] 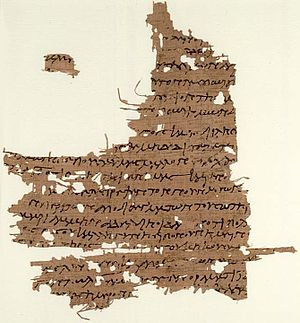 Papyrus Berolinensis 8502, also known as the Akhmim Codex, also contains the Apocryphon of John, the Sophia of Jesus Christ, and a summary of the Act of Peter. All four works contained in the manuscript are written in Sahidic in a Coptic dialect.[2] Two other fragments of the Gospel of Mary have been discovered since, both written in Greek (Papyrus Oxyrhynchus L 3525 and Papyrus Rylands 463). P.Oxy. L 3525 "... was in fact found by Grenfell and Hunt some time between 1897 and 1906, but only published in 1983,"[3] by PJ Parsons.[4]

Most scholars agree that the original gospel was written in Greek sometime during the 2nd century.[6] However, Hollis Professor of Divinity Karen King at Harvard Divinity School suggests that it was written during the time of Christ.[7][8]

Scholars do not always agree which of the New Testament people named Mary is the central character of the Gospel of Mary. Some have suggested that she may represent Mary the mother of Jesus.[9]

Arguments in favor of Mary Magdalene are based on her status as a known follower of Jesus, the tradition of being the first witness of his resurrection, and her appearance in other early Christian writings. She is mentioned as accompanying Jesus on his journeys (Luke 8:2) and is listed in the Gospel of Matthew as being present at his crucifixion (Matthew 27:56). In the Gospel of John, she is recorded as the first witness of Jesus' resurrection (John 20:14–16); (Mark 16:9 later manuscripts).

Aida Spencer, however, reviewing De Boer for the Journal of the Evangelical Theological Society, notes: "In summary, Mary Magdalene [the title of a study by De Boer] is an interesting, insightful, and intriguing historical study. However, the reader who is not capable of analyzing theories and who may be susceptible to the idea of an open canon may confuse a pleasant, respectable style with a potentially misleading theory."[12]

King also argues in favor of naming Mary Magdalene as the central figure in the Gospel of Mary. She summarizes: “It was precisely the traditions of Mary as a woman, as an exemplary disciple, a witness to the ministry of Jesus, a visionary of the glorified Jesus, and someone traditionally in contest with Peter, that made her the only figure who could play all the roles required to convey the messages and meanings of the Gospel of Mary.”[13]

The most complete text of the Gospel of Mary is contained in Berolinensis 8502, but even so, it is missing six manuscript pages at the beginning of the document and four manuscript pages in the middle.[14] As such, the narrative begins in the middle of a scene, leaving the setting and circumstances unclear. King believes, however, that references to the death of the Savior and the commissioning scene later in the narrative indicate the setting in the first section of the text is a post resurrection appearance of the Savior.[15] As the narrative opens, the Savior is engaged in dialogue with his disciples, answering their questions on the nature of matter and the nature of sin. At the end of the discussion, the Savior departs leaving the disciples distraught and anxious. According to the story, Mary speaks up with words of comfort and encouragement. Then Peter asks Mary to share with them any special teaching she received from the Savior, “Peter said to Mary, ‘Sister, we know that the Savior loved you more than the rest of the women. Tell us the words of the Savior which you remember—which you know (but) we do not, nor have we heard them.’”[11] Mary responds to Peter’s request by recounting a conversation she had with the Savior about visions.

(Mary) said, "I saw the Lord in a vision and I said to him, ‘Lord, I saw you today in a vision.’" He answered and said to me: “Blessed are you, that you did not waver at the sight of me. For where the mind is, there is the treasure." I said to him, "So now, Lord, does a person who sees a vision see it <through> the soul <or> through the spirit?"[10]

In the conversation, the Savior teaches that the inner self is composed of soul, spirit/mind, and a third mind that is between the two which sees the vision. Then the text breaks off and the next four pages are missing. When the narrative resumes, Mary is no longer recalling her discussion with the Savior. She is instead recounting the revelation given to her in her vision. The revelation describes an ascent of a soul, which as it passes on its way to its final rest, engages in dialogue with four powers that try to stop it.

Her vision does not meet with universal approval:

But Andrew answered and said to the brethren, "Say what you think concerning what she said. For I do not believe that the Savior said this. For certainly these teachings are of other ideas."[16]

Peter also opposed her in regard to these matters and asked them about the Savior. "Did he then speak secretly with a woman, in preference to us, and not openly? Are we to turn back and all listen to her? Did he prefer her to us?"[17]

However Levi defends Mary Magdelene and quells Peter's attack on her. In the text, Peter appears to be offended by the discovery that Jesus selected Mary above the other disciples to interpret his teachings.

The Gospel of Mary is often interpreted as a Gnostic text. According to Pheme Perkins, on the basis of thirteen works,[18] the Gospel follows a format similar to other known Gnostic dialogues which contain a revelation discourse framed by narrative elements. The dialogues are generally concerned with the idea of the Savior as reminder to human beings of their bond with God and true identity, as well as the realization of the believer that redemption consists of the return to God and liberty from matter after death. The Gospel of Mary contains two of these discourses (7.1–9.4 and 10.10–17.7) including addresses to New Testament figures (Peter, Mary, Andrew and Levi) and an explanation of sin as adultery (encouragement toward an ascetic lifestyle) which also suit a Gnostic interpretation. Scholars also note that the 5th-century Coptic version of the Gospel is part of the Berlin Codex along with the Apocryphon of John and The Sophia of Jesus Christ which are typically viewed as Gnostic texts. However, while many scholars take for granted the Gnostic character of the Gospel of Mary, the Gnostic beliefs concerning creation theory and the Demiurge that would suggest an extreme dualism in the creation is not present in the portions currently retrieved.[19]

According to Bart D. Ehrman: "Mary (Magdalene) is accorded a high status among the apostles of Jesus." Levi actually acknowledges that Jesus loved her more than he loved all of the other apostles. Mary claimed to have had a conversation with Jesus, and Andrew and Peter questioned this. "Four pages are lost from the manuscript", so there is really no way for anyone to know exactly what happened.[20]

De Boer (2004), however, suggests that the Gospel of Mary should not be read as a Gnostic specific text, but that it is to be "interpreted in the light of a broader Christian context". She argues that the Gospel stems from a monistic view of creation rather than the dualistic one central to Gnostic theology and also that the Gospel’s views of both Nature and an opposite nature are more similar to Jewish, Christian, and Stoic beliefs. She suggests that the soul is not to be freed from Powers of Matter, but rather from the powers of the opposite nature. She also claims that the Gospel’s main purpose is to encourage fearful disciples to go out and preach the gospel.

an intriguing glimpse into a kind of Christianity lost for almost fifteen hundred years...[it] presents a radical interpretation of Jesus' teachings as a path to inner spiritual knowledge; it rejects His suffering and death as the path to eternal life; it exposes the erroneous view that Mary of Magdala was a prostitute for what it is—a piece of theological fiction; it presents the most straightforward and convincing argument in any early Christian writing for the legitimacy of women's leadership; it offers a sharp critique of illegitimate power and a utopian vision of spiritual perfection; it challenges our rather romantic views about the harmony and unanimity of the first Christians; and it asks us to rethink the basis for church authority.[21]

King concludes that “both the content and the text’s structure lead the reader inward toward the identity, power and freedom of the true self, the soul set free from the Powers of Matter and the fear of death”. “The Gospel of Mary is about inter-Christian controversies, the reliability of the disciples’ witness, the validity of teachings given to the disciples through post-resurrection revelation and vision, and the leadership of women.”[19]

King also sees evidence for tensions within 2nd-century Christianity, reflected in "the confrontation of Mary with Peter, [which is] a scenario also found in The Gospel of Thomas,[22] Pistis Sophia,[23] and the Coptic Gospel of the Egyptians. Peter and Andrew represent orthodox positions which deny the validity of esoteric revelation and reject the authority of women to teach."