The State Planning Committee, commonly known as Gosplan (Russian: Госпла́н, pronounced [ɡɐsˈplan]),[1] was the agency responsible for central economic planning in the Soviet Union. Established in 1921 and remaining in existence until the dissolution of the Soviet Union in 1991, Gosplan had as its main task the creation and administration of a series of five-year plans governing the economy of the USSR.

The time of the October Revolution and the Russian Civil War which followed was a period of virtual economic collapse. Production and distribution of necessary commodities were severely tested as factories were shuttered and major cities such as Petrograd were depopulated, with urban residents returning to the countryside to claim a place in land redistribution and in order to avoid the unemployment, lack of food, and lack of fuel which had become endemic. By 1919 hyperinflation had emerged, further pushing the struggling economic system of Soviet Russia towards total collapse.

An ad hoc system remembered to history as Military Communism emerged. The Soviet government's Council of Workers' and Peasants' Defense rushed from economic bottleneck to economic bottleneck in a frenzied effort to sustain what remained of Russian industry on behalf of the Red Army, locked in a life or death struggle with the anti-Bolshevik White movement, backed by the foreign military intervention of Great Britain, France, Japan, the United States of America, and other countries. In the countryside food requisitions, often backed by brute force, took place under the nominal auspices of the People's Commissariat of Agriculture.

In the midst of such chaos the mere idea of long-term economic planning remained a utopian dream during these first years of existence of Soviet Russia. It was not until the Civil War had drawn to a successful conclusion for the Bolsheviks in 1920 that serious attention was paid to the question of systematic planning for the Soviet economy. In March 1920 the Council of Workers' and Peasants' Defense was given a new name — the Council of Labor and Defense (STO) — and a broader planning mission.[2]

STO was established as a commission of the Council of People's Commissars (Sovnarkom), to be headed by the leading People's Commissars themselves, a representative of the Russian trade unions, and the chief of the Central Statistical Agency.[3] STO was directed to establish a single economic plan for Soviet Russia and to direct the work of the individual People's Commissariats toward this plan's fulfillment, so that "for the first time the RSFSR had a general planning organ with clearly defined functions," as historian E. H. Carr has observed.[3]

The State Committee for Planning, commonly known as "Gosplan," was launched as a permanent advisory subcommittee of STO, assigned with the task of conducting detailed economic investigations and providing expert recommendations to the decision-making STO.[4] 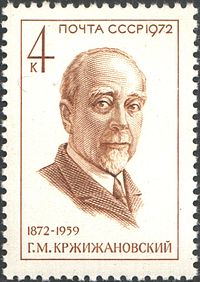 Gleb Krzhizhanovsky, first head of Gosplan, as he appeared on a 1972 Soviet postage stamp.

Gosplan was formally established by a Sovnarkom decree, dated 22 February 1921.[5] Ironically, the decree was passed on the same day that an article by Soviet leader V. I. Lenin was published in Pravda criticizing advocates of a "single economic plan" for their "idle talk" and "boring pedantry" and arguing that the GOELRO plan for national electrification was the "one serious work on the question of the single economic plan."[5] Other members of Sovnarkom were more optimistic, however, and Lenin sustained a defeat on the establishment of another planning entity, Gosplan.[5] As a compromise measure uniting the mission of the two planning entities, head of GOELRO Gleb Krzhizhanovsky was tapped to head Gosplan.[5]

Initially Gosplan had an advisory function,[4] with its entire staff consisting of just 34 people at the time of its April 1921 launch.[6] These were selected on the basis of academic expertise in specialized aspects of industry; just 7 were members of the Russian Communist Party (bolsheviks).[6] With the ongoing turn to a market-based system of production as part of the New Economic Policy (NEP), very real constraints existed on the possible extent of central planning during the initial phase of Gosplan's institutional life.

Gosplan quickly became a leading bureaucratic advocate for central planning and expanded investment in heavy industry, with Leon Trotsky one of the leading political patrons of the agency.[7] In June 1922 a new decree further expanded Gosplan's purview, with the agency directed to compose both "long-term" and "immediate" plans of production.[7] Gosplan was to be consulted regarding proposed economic and financial decrees submitted to the Council of People's Commissars by the various economic People's Commissariats.[7] An administrative rivalry ensued between Gosplan and the People's Commissariat of Finance (Narkomfin), the latter the agency most in favor of currency stabilization and expansion of the general economy through the regulated free market.[7]

Gosplan had no power of compulsion in this early interval, but was forced to work through Sovnarkom, STO, or the People's Commissariats to have its suggestions implemented by decree.[8] The agency's economic calculations and policy suggestions remained largely abstract throughout the first half of the 1920s, with Gosplan's desires and actual policy largely disjointed.[8]

Tension continued between Narkomfin and Gosplan throughout the NEP period, with Narkomfin advocating for increased grain exports as a means of bolstering the currency by balancing imports and exports while simultaneously bolstering peasant prosperity, while Gosplan emerged as the chief advocate of cheap food and planned development of industry.[9]

Its work was coordinated with the USSR Central Statistical Directorate, the People's Commissariat of Finance, and the Supreme Soviet of the National Economy (Vesenkha), and later with the State Bank (Gosbank) and State Supply Committee (Gossnab).

With the introduction of five-year plans in 1928, Gosplan became responsible for their creation and supervision according to the objectives declared by the All-Russian Communist Party (bolsheviks).

During 1930 the Statistical Directorate was merged into Gosplan, and on 3 February 1931 Gosplan was resubordinated to the Sovnarkom.

During May 1955 Gosplan was divided into two commissions: the USSR Council of Ministers State Commission for Advanced Planning and the USSR Council of Ministers Economic Commission on Current Planning. These were, respectively, tasked with predictive and immediate planning. The work of the latter was based on the five-year plans delivered by Gosplan, with Gosplan planning 10–15 years ahead.

Gosplan was headquartered at the building now occupied by the State Duma, in Moscow.

The introduction of the first five-year plan in 1928 led to a re-examination of the roles of Gosplan and VSNKh, the supreme state organization for management of the economy at this time. This re-examination of roles was required because VSNKh itself also had responsibility for planning through the Industrial Planning Commission (Promplan). Re-examination of roles was also required as the introduction of the first five-year plan meant that Gosplan's role was no longer one of prognosis and drafting of 'control figures' since plans had now become orders to act.

In order to ensure the success of the plan it was necessary to ensure that inputs from one part of the economy matched outputs from another part of the economy. Gosplan achieved this using a methodology called the system of 'material balances'. For a plan period (in detail for one year and in lesser detail for a five-year plan) Gosplan drew up a balance sheet in terms of units of material (i.e. money was not used as part of the accounting process).

The first step in the process was to assess how much steel, cement, wool cloth, etc. would be available for the next year. This calculation was based on the following formula: production minus exports plus imports plus or minus changes in stocks).

The planning system as such was fairly simple. Gosplan calculated the sum of the country's resources and facilities, established priorities for their use, and handed down output targets and supply allocations to the various economic ministries and through them to every branch and enterprise in the entire economy. To be sure, the system had its limitations, including the absence of meaningful price and cost information and the difficulty of extending planning to all the special commodities and enterprises in a modern economy. More serious difficulties stemmed from the attitudes and priorities built into the Stalinist planning system. "From the start," write the Soviet economists Nikolai Shmelev and Vladimir Popov, "the administrative system was distinguished by economic romanticism, profound economic illiteracy, and incredible exaggeration of the real effect that the 'administrative factor' had on economic processes and on the motivations of the public."

Wages and pensions were leveled upwards, and skilled and manual work began to exceed much mental and professional work in remuneration. The Italian economic historian Rita Di Leo found "a compression of differentials" and a bias for so-called "productive" work (i.e., yielding measurable physical output) over "unproductive" work (services, trade, etc.). "Such a wage policy calls into question the modernization of society, its efficiency, its competitiveness."

Using this method any changes in the plan to remove mismatches between inputs and outputs would result in hundreds, even thousands, of changes to material balances. This meant that, without the aid of information technology, Gosplan could only deal with the economy in very general terms.

Ideological bias resulted in unrealistic plans that were impossible to execute. Pressure to execute them anyway resulted in widespread falsification of statistics on all levels of reporting. Falsified plan realization feedback further resulted in Gosplan preparing plans even more detached from reality:

The second economy engulfed a significant fraction of the GDP. Not only individuals but state enterprises as well engaged in these practices, often out of necessity, when extra-legal influence or illegal operations appeared to be the only way to fulfill the demands of the plan. Claims of plan fulfillment that were passed up the hierarchy became as impossible to believe as the targets in the next plan.