The Gothic alphabet is an alphabet for writing the Gothic language, created in the 4th century by Ulfilas (or Wulfila) for the purpose of translating the Bible.[1]

The alphabet is essentially an uncial form of the Greek alphabet, with a few additional letters to account for Gothic phonology: Latin F, two Runic letters to distinguish the /j/ and /w/ glides from vocalic /i/ and /u/, and the letter ƕair to express the Gothic labiovelar. It is completely different from the 'Gothic script' of the Middle Ages, a script used to write the Latin alphabet.

Ulfilas is thought to have consciously chosen to avoid the use of the older Runic alphabet for this purpose, as it was heavily connected with heathen beliefs and customs.[2] Also, the Greek-based script probably helped to integrate the Gothic nation into the dominant Greco-Roman culture around the Black Sea.[3] The individual letters, however, still bear names derived from those of their Runic equivalents.

In past centuries, some authors asserted that Greek-like letters were already in use among Germanic tribes long before Ulfilas. Johannes Aventinus (c. 1525) even ascribed them to the mythical progenitor Tuisto, claiming the Greeks had really stolen the idea from them, and not the Phoenicians. Such theories enjoy no scholarly support today, as all available evidence traces the development of alphabetic writing to the Middle East, although there is some testimony by classical Roman sources, as well as a few assorted tombstones, indicating that Greek letters were sometimes used in Germany, in addition to Gaul, by the time of Julius Caesar (1st century BC).

Below is a table of the Gothic alphabet.[4] Two letters used in its transliteration are not used in current English: the Runic þ (representing /θ/), and ƕ (representing /xʷ/).

As with the Greek alphabet, Gothic letters were also assigned numerical values. When used as numerals, letters were written either between two dots (•𐌹𐌱• = 12) or with an overline (𐌹𐌱 = 12). Two letters, 𐍁 (90) and 𐍊 (900), have no phonetic value.

The letter names are recorded in a 9th-century manuscript of Alcuin (Codex Vindobonensis 795). Most of them seem to be Gothic forms of names also appearing in the rune poems. The names are given in their attested forms followed by the reconstructed Gothic forms and their meanings.[5]

Most of the letters have been taken over directly from the Greek alphabet, though a few have been created or modified from Latin or Runic letters to express unique phonological features of Gothic. These are:

𐍂 (r), 𐍃 (s) and 𐍆 (f) appear to be derived from their Latin equivalents rather than from the Greek, although the equivalent Runic letters (ᚱ, ᛋ and ᚠ), assumed to have been part of the Gothic futhark, likely played some role in this choice.[9]

Diacritics and punctuation used in the Codex Argenteus include a trema placed on 𐌹 i, transliterated as ï, in general applied to express diaeresis, the Interpunct (·) and colon (:) as well as overlines to indicate sigla (such as xaus for xristaus) and numerals. 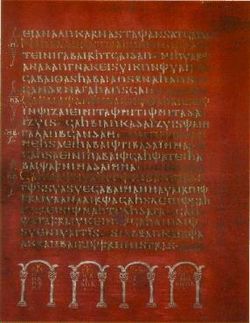 First page of the Codex Argenteus or "Silver Bible", a 6th-century manuscript containing bishop Ulfilas's 4th century translation of the Christian Bible into the Gothic language.

The Gothic alphabet was added to the Unicode Standard in March, 2001 with the release of version 3.1.