Very few Elder Futhark inscriptions in the Gothic language have been found in the territory historically settled by the Goths (Wielbark culture, Chernyakhov culture). This is due to the early Christianization of the Goths, with the Gothic alphabet replacing runes by the mid 4th century.

There are about a dozen candidate inscriptions, and only three of them are widely accepted to be of Gothic origin: the gold ring of Pietroassa, bearing a votive inscription, part of a larger treasure found in the Romanian Carpathians, and two spearheads inscribed with what is probably the weapon's name, one found in the Ukrainian Carpathians, and the other in eastern Germany, near the Oder.

A gold ring (necklace) found in 1837 in Pietroassa (recte Pietroasa, north-western Romania, some 50 km south of Satu Mare), dated to the ca. AD 400, bearing an Elder Futhark inscription of 15 runes. The ring was stolen in 1875, and clipped in two with pliers by a Bucharest goldsmith. It was recovered, but the 7th rune is now destroyed:

The identity of the 7th rune as othala has since been called into question, but a photograph taken for London's Arundel Society before it was vandalised has recently been republished and the damaged rune is clearly an ᛟ (Mees 2004). How to interpret gutanio remains a matter of some dispute among runologists, however (Nedoma 2003). 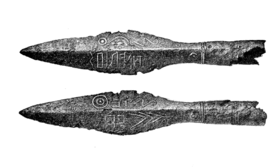 The spearhead of Kovel

The spearhead measures 15.5 cm with a maximal length of 3.0 cm. Both sides of the leaf were inlaid with silver symbols. The inscription notably runs right to left, reading tilarids, interpreted as "thither rider", the name either of a warrior, or of the spear itself. It is identified as East Germanic (Gothic) because of the nominative -s (in contrast to Proto-Norse -z). The t and d are closer to the Latin alphabet than to the classical Elder Futhark, as it were <TᛁᛚᚨᚱᛁDᛊ>.

An 1880 casting of the spearhead is exhibited in Berlin, an 1884 casting in Warsaw. The original was looted by Nazi archaeologists from its Polish owner in 1939 and it was lost altogether at the end of WWII.

Silver buckle found in Szabadbattyán, Hungary, dated to the early 5th century, perhaps referring to the "Mærings" or Ostrogoths.