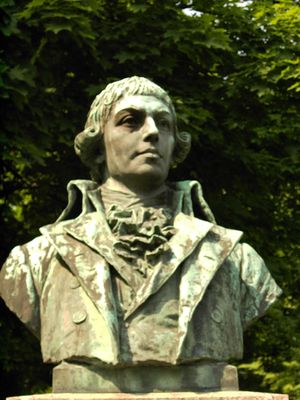 Gottfried August Bürger (December 31, 1747 – June 8, 1794) was a German poet. His ballads were very popular in Germany. His most noted ballad, Lenore, found an audience beyond readers of the German language in an English adaptation and a French translation.

He was born in Molmerswende (now a part of Mansfeld), Principality of Halberstadt, where his father was the Lutheran pastor. He showed an early predilection for solitary and gloomy places and the making of verses, for which he had no other model than hymnals. At the age of twelve, Bürger was practically adopted by his maternal grandfather, Bauer, at Aschersleben, who sent him to the Pädagogium at Halle. He learned Latin with difficulty. In 1764 he passed to the University of Halle, as a student of theology, which, however, he soon abandoned for the study of jurisprudence. There he fell under the influence of Christian Adolph Klotz (1738–1771), who directed Bürger's attention to literature and encouraged his natural disposition to a wild and unregulated life. In consequence of his dissipated habits, he was in 1767 recalled by his grandfather, but on promising to reform was in 1768 allowed to enter the University of Göttingen as a law student.

As he continued his wild career, however, his grandfather withdrew his support and he was left to his own devices. Meanwhile he had made fair progress with his legal studies, and had the good fortune to form a close friendship with a number of young men of literary tastes. He studied the ancient classics and the best works in French, Italian, Spanish and English, particularly Shakespeare, and the old English and Scottish ballads. Thomas Percy's Reliques of Ancient English Poetry was his constant companion. In the Göttingen Musenalmanach, edited by Heinrich Christian Boie and Friedrich Wilhelm Gotter, Bürger's first poems were published, and by 1771 he had already become widely known as a poet. In 1772, through Boie's influence, Bürger obtained the post of Amtmann or district magistrate at Altengleichen near Göttingen. His grandfather was now reconciled to him, paid his debts and established him in his new sphere of activity. 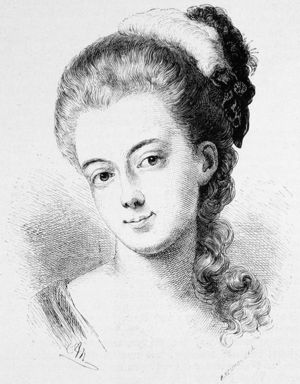 Auguste Leonhart, sister of Bürger's wife, and the “Molly” of his poetry. 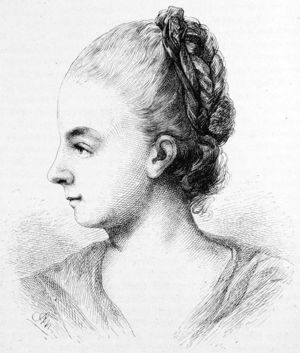 Dorette Bürger, after a pastel drawing by her sister Auguste in 1781.

Meanwhile he kept in touch with his Göttingen friends, and when the Göttinger Bund or "Hain" ("Göttinger Hainbund") was formed, Bürger, though not himself a member, kept in close touch with it. In 1773,[1] the ballad Lenore[2] was published in the Musenalmanach. This poem, which in dramatic force and in its vivid realization of the weird and supernatural remains without a rival, made his name a household word in Göttingen. Lenore was paraphrased by Walter Scott under the title William and Helen and Goethe did the same under the title Bride of Corinth.[3][4][5] In 1774 he married Dorette Leonhart, the daughter of a Hanoverian official; but his passion for his wife's younger sister Auguste (the "Molly" of his poems and elegies) rendered the union unhappy and unsettled his life. In 1778 Bürger became editor of the Musenalmanach, a position he retained until his death.[6] In the same year published the first collection of his poems. In 1780 he took a farm at Appenrode, but in three years lost so much money that he had to abandon the venture. Pecuniary troubles oppressed him, and being accused of neglecting his official duties, and feeling his honour attacked, he gave up his official position and removed in 1784 to Göttingen, where he established himself as Privatdozent. 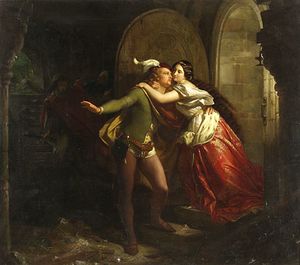 Shortly before his removal there his wife died (July 30, 1784), and on June 29 in the next year he married his sister-in-law "Molly." Her death in childbirth on January 9, 1786 affected him deeply. He appeared to lose at once all courage and all bodily and mental vigour. He still continued to teach in Göttingen; at the jubilee of the foundation of the university in 1787 he was made an honorary doctor of philosophy, and in 1789 was appointed extraordinary professor in that faculty, though without a stipend. He was obliged to gain his living by poorly rewarded translations for booksellers.

In 1790, he married a third time, his wife being a certain Elise Hahn, who, enchanted with his poems, had offered him her heart and hand. Only a few weeks of married life with his "Schwabenmädchen" sufficed to prove his mistake, and after two and a half years he divorced her. Deeply wounded by Schiller's criticism, in the 14th and 15th part of the Allgemeine Literaturzeitung of 1791, of the second edition of his poems, disappointed, wrecked in fortune and health, Bürger eked out a precarious existence as a teacher in Göttingen until, ill with tuberculosis, he died there on June 8, 1794. The government of Hanover afforded him some assistance shortly before his death.

Bürger's talent for popular poetry was very considerable, and his ballads are among the finest in the German language. Besides Lenore, Das Lied vom braven Manne, Die Kuh, Der Kaiser und der Abt and Der wilde Jäger are famous. Among his purely lyrical poems, but few have earned a lasting reputation; but mention may be made of Das Blümchen Wunderhold, Lied an den lieben Mond, and a few love songs. His sonnets, particularly the elegies, are of great beauty. Bürger revived the sonnet form in German, and his experiments in it were praised as models by Schiller, despite his severe criticism of some of Bürger's more popular poems.[6]

Editions of Bürger's Sämtliche Schriften appeared at Göttingen, 1817 (incomplete); 1829—1833 (8 vols.), and 1835 (one vol.); also a selection by Eduard Grisebach (5th ed, 1894). The Gedichte have been published in innumerable editions, the best being that by August Sauer (2 vols., 1884). Briefe von und an Bürger were edited by Adolf Strodtmann in 4 vols. (1874). Bürger was introduced to English readers in William and Helen (1775), Walter Scott's version of Lenore. The elder Dumas translated Lenore into French.[6]

Bürger is known for German translations of Baron Munchausen’s narrative of his marvellous travels and campaigns in Russia by Rudolf Erich Raspe (1786, after the release of the 4th English edition; 2nd expanded ed. 1788, after the release of the 5th expanded English edition). In his introduction to the 1788 German edition, Bürger admitted to adapting and elaborating the original English-language works, and, despite his clear notice that he was doing a translation, for some time Bürger was believed to be the author of the tales. Raspe had originally concealed his authorship.