From Infogalactic: the planetary knowledge core
Jump to: navigation, search
For a style of play of contract bridge, see Goulash (bridge). For the American casserole, see American goulash. 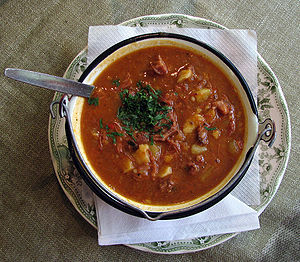 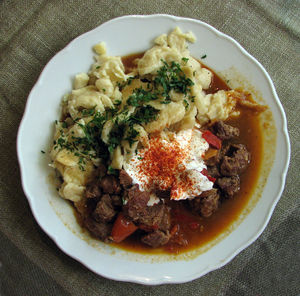 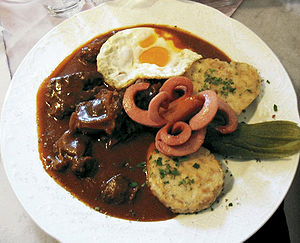 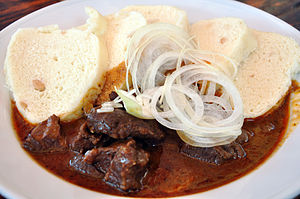 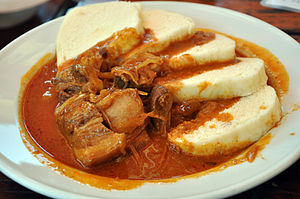 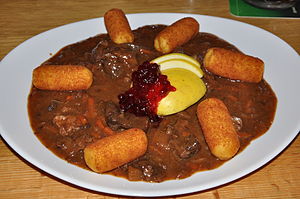 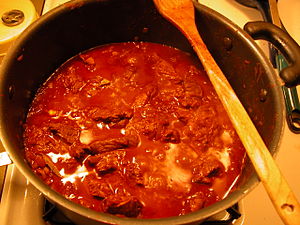 Goulash (Hungarian: gulyás) is a soup or stew of meat and vegetables, seasoned with paprika and other spices.[1] Originating from the medieval Kingdom of Hungary, goulash is also a popular meal in Central Europe, Scandinavia and Southern Europe.

Its origin traces back to the 9th century to stews eaten by Hungarian shepherds.[2] Back then, the cooked and flavored meat was dried with the help of the sun and packed into bags produced from sheep's stomachs, needing only water to make it into a meal.[2] It is one of the national dishes of Hungary and a symbol of the country.[3][4]

The name originates from the Hungarian "gulyás" [ˈɡujaːʃ] (

The word gulyás originally meant only "herdsman", but over time the dish became gulyáshús (goulash meat) – that is to say, a meat dish which was prepared by herdsmen. Today, gulyás refers both to the herdsmen, and to the soup. From the Middle Ages until well into the 19th century, the Puszta was the home of massive herds of cattle. They were driven, in their tens of thousands, to Europe’s biggest cattle markets in Moravia, Vienna, Nuremberg and Venice. The herdsmen made sure that there were always some cattle that had to be slaughtered along the way, the flesh of which provided them with gulyáshús.[7][8]

In Hungarian cuisine, traditional "Gulyásleves" (literally "goulash soup"), "bográcsgulyás",[9] pörkölt, and paprikás were thick stews made by cattle herders and stockmen.[9] Garlic, caraway seed, bell pepper, and wine are optional. One may alternatively prepare these dishes as soups rather than stews. Excepting paprikás, the Hungarian stews do not rely on a flour or roux for thickening. Tomato is a modern addition, totally unknown in the original recipe and in the whole Central European food culture until the first half of the twentieth century.

Goulash can be prepared from beef, veal,[10] pork, or lamb. Typical cuts include the shank, shin, or shoulder; as a result, goulash derives its thickness from tough, well-exercised muscles rich in collagen, which is converted to gelatin during the cooking process. Meat is cut into chunks, seasoned with salt, and then browned with sliced onion in a pot with oil or lard. Paprika is added, along with water or stock, and the goulash is left to simmer. After cooking a while, garlic, whole or ground caraway seed, or soup vegetables like carrot, parsley root, peppers (green or bell pepper) and celery may be added. Other herbs and spices could also be added, especially chili pepper, bay leaf and thyme.[9] Diced potatoes may be added, since they provide starch as they cook, which makes the goulash thicker and smoother. A small amount of white wine or wine vinegar may also be added near the end of cooking to round the taste. Goulash may be served with small egg noodles called csipetke.[11] The name Csipetke comes from pinching small, fingernail-sized bits out of the dough (csipet =pinch) before adding them to the boiling soup.

A thicker and richer goulash, similar to a stew, originally made with three kinds of meat, is called Székely gulyás, named after the Hungarian writer, journalist and archivist József Székely (1825–1895).[9]

"Paprikás krumpli" is a traditional paprika-based potato stew with diced potatoes, onion, bell peppers, ground paprika and some bacon or sliced spicy sausage, like the smoked Debrecener, in lieu of beef.

In German-speaking countries this inexpensive peasant stew is made with sausage and known as Kartoffelgulasch ("potato goulash").

Thick stews similar to pörkölt and the original cattlemen stew are popular throughout almost all the former Austrian-Hungarian Empire, from Northeast Italy to the Carpathians. Like pörkölt, these stews are generally served with boiled or mashed potato, polenta, dumplings (e.g. nokedli, or galuska), spätzle or, alternatively, as a stand-alone dish with bread.

Goulash (Albanian: gullash) is considered a national dish throughout Albania, but its popularity is much higher in northern parts of the country.

In Vienna, the former center of the Austro-Hungarian Empire, a special kind of goulash had been developed. The Wiener Saftgulasch or the Fiakergulasch on the menu in traditional restaurants is a must-have. It is a rich pörkölt-like stew; more onions but no tomatoes or other vegetables are used, and it usually comes just with dark bread. A variation of the Wiener Saftgulasch is the Fiakergulasch, which is served with fried egg, fried sausage, and dumplings named Semmelknödel.

Goulash (Croatian: gulaš) is also very popular in most parts of Croatia, especially north (Hrvatsko Zagorje) and Lika. It is considered to be part of traditional cuisine. In Gorski Kotar and Lika, deer and boar frequently replace beef (lovački gulaš). There is also a kind of goulash with porcini mushrooms (gulaš od vrganja). Bacon is an important ingredient.

Gulaš is often served with fuži, njoki, polenta or pasta. In Croatian, Bosnian and Serbian is augmented with vegetables. Green and red bell peppers and carrots are most commonly used. Sometimes one or more other kinds of meat are added, e.g., pork loin, bacon, or mutton. In Slovenia, they are known as perkelt, but are often referred to as "goulash" or a similar name. 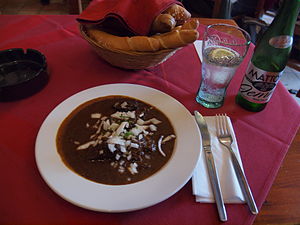 In the Czech and Slovak Republic, goulash (Czech and Slovak: guláš) is usually made with beef, although pork varieties exist, and served with bread dumplings (in Czech hovězí guláš s knedlíkem, in Slovak hovädzí guláš s knedľou), in Slovakia more typically with bread. In pubs it is often garnished with slices of fresh onion, and is typically accompanied by beer. Beer can be also added to the stew in the process of cooking. Seasonal varieties of goulash include venison or wild boar goulashes.

Another popular variant of guláš is segedínský guláš (Szeged goulash), with sauerkraut. In Czech and Slovak slang, the word guláš means "mishmash", typically used as mít v tom guláš: to be disoriented or to lack understanding of something. 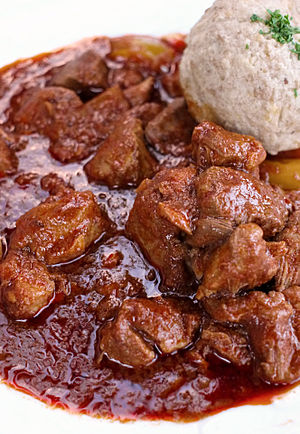 Goulash in Bavaria is often made with a mix of beef and pork, and served with a bread dumpling

Gulasch is a beef (Rindergulasch), venison (Hirschgulasch), or wild boar (Wildschweingulasch)[13] stew that may include red wine and is usually served with potatoes or dumplings. Gulaschsuppe is the same concept served as a soup, but then usually with bread.

Goulash in Italy is eaten in the region of Friuli-Venezia Giulia and the autonomous region of Trentino-Alto Adige/Südtirol, regions that formerly were part of the Austro-Hungarian Empire and still are culturally and linguistically Austrian. Here it is eaten as a regular Sunday dish.[citation needed] It can also, although less typically so, be found in the nearby Veneto. An interesting regional recipe comes from the Pustertal (Val Pusteria, Puster Valley) in South Tyrol. It is made of beef and red wine, and seasoned with rosemary, red paprika, bay leaf, marjoram and lemon zest, served with crusty white bread or polenta. The lemon gives its signature flavor. Goulash is also quite popular in the city of Ancona, which is culturally quite near to eastern Europe.

A form of goulash (Polish: gulasz) is also popular in Poland, though said dish is more similar to Hungarian pörkölt than actual goulash. It is usually served with various forms of noodles and dumplings, such as pl (Pyzy (dish); pyzy)

In Serbia, goulash (Serbian: гулаш) is eaten in most parts of the country, especially in Vojvodina, where it was probably introduced by the Hungarian minority. It is actually a pörkölt like stew, usually made with beef, veal or pork, but also with game meat like venison, deer and boar. In Serbia, goulash is most often served with boiled potatoes or potato mash.

In Slovene partizanski golaž, partisan goulash, favoured by Slovenian partisans during the Second World War, and still regularly served at mass public events; most meat is replaced with quartered potatoes. It is not as thick as goulash, but thicker than goulash soup.

American goulash, mentioned in cookbooks since at least 1914, exists in a number of variant recipes.[14][15] Originally a dish of seasoned beef,[15] core ingredients of American goulash now usually include elbow macaroni, cubed steak, ground beef or hamburger, and tomatoes in some form, whether canned whole, as tomato sauce, tomato soup, and/or tomato paste. In some areas it is called slumgullion. 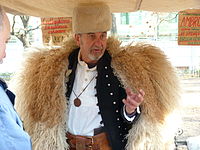