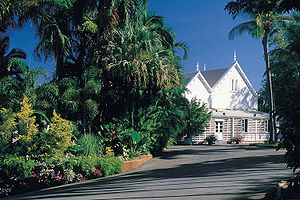 Government House, Darwin is the office and official residence of the Administrator of the Northern Territory. Built between 1870 and 1878, the building is set on 13,000 square metres of hillside gardens in the centre of the Darwin business district, on The Esplanade.

Government House is the oldest European building in the Northern Territory. Government House has been the home of successive Government Residents and Administrators since 1871. The house is an example of a mid-Victorian Gothic villa, here adapted for the local climate by the addition of numerous shaded verandahs and porches. It has endured cyclones, earthquakes, enemy bombing raids, infestations of white ants and rowdy public demonstrations to remain one of the most spectacular and attractive buildings in Darwin.

On 17 December 1918, Government House became the focal point of political turmoil and union unrest against John Gilruth's administration. About 1000 demonstrators marched to Government House where they burnt an effigy of Gilruth and demanded his resignation. The incident became well known as the Darwin Rebellion.[1]

Government House, was entered on the Register of the National Estate in 1980 and was declared a Place of Heritage under the Heritage Conservation Act (Northern Territory) on 15 March 1996.