A government budget is a government document presenting the government's proposed revenues and spending for a financial year that is often passed by the legislature, approved by the chief executive or president and presented by the Finance Minister to the nation. The budget is also known as the Annual Financial Statement of the country. This document estimates the anticipated government revenues and government expenditures for the ensuing (current) financial year.[1] For example, only certain types of revenue may be imposed and collected. Property tax is frequently the basis for municipal and county revenues, while sales tax and/or income tax are the basis for state revenues, and income tax and corporate tax are the basis for national revenues. 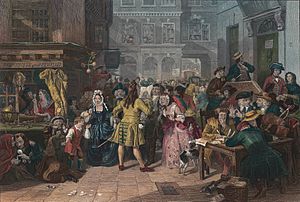 The financial crisis caused by the South Sea Bubble led to the presentation of the government budget under Sir Robert Walpole. Painting by Edward Matthew Ward.

The practice of presenting budgets and fiscal policy to parliament was initiated by Sir Robert Walpole in his position as Chancellor of the Exchequer, in an attempt to restore the confidence of the public after the chaos unleashed by the collapse of the South Sea Bubble in 1720.[2]

Thirteen years later, Walpole announced his fiscal plans to bring in an excise tax on the consumption of a variety of goods, such as wine and tobacco, and to lessen the taxation burden on the landed gentry. This provoked a wave of public outrage, including fierce denunciations from the Whig peer William Pulteney, who wrote a pamphlet entitled The budget opened, Or an answer to a pamphlet. Concerning the duties on wine and tobacco - the first time the word 'budget' was used in connection with the government's fiscal policies. The scheme was eventually rescinded.[3]

The institution of the annual account of the budget evolved into practice during the first half of the 18th century and had become well established by the 1760s; George Grenville introduced the Stamp Act in his 1764 budget speech to the House of Commons of Great Britain. [4]

Government budgets are of three types:

Budgeted revenues of governments in 2006

The two basic elements of any budget are the revenues and expenses. In the case of the government, revenues are derived primarily from taxes. Government expenses include spending on current goods and services, which economists call government consumption; government investment expenditures such as infrastructure investment or research expenditure; and transfer payments like unemployment or retirement benefits.

Government budgets have economic, political and technical basis. Unlike a pure economic budget, they are not entirely designed to allocate scarce resources for the best economic use. They also have a political basis wherein different interests push and pull in an attempt to obtain benefits and avoid burdens. The technical element is the forecast of the likely levels of revenues and expenses.