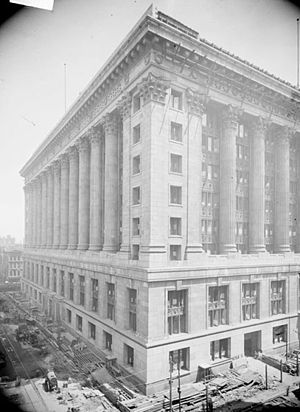 Chicago City Hall, shortly before construction was completed in 1911.

The government of the City of Chicago, Illinois is divided into executive and legislative branches. The Mayor of Chicago is the chief executive, elected by general election for a term of four years, with no term limits. The mayor appoints commissioners and other officials who oversee the various departments. In addition to the mayor, Chicago's two other citywide elected officials are the City Clerk and the treasurer.

The City Council is the legislative branch and is made up of 50 aldermen, one elected from each ward in the city.[1] The council takes official action through the passage of ordinances and resolutions and approves the city budget.[2] Government priorities and activities are established in a budget ordinance usually adopted each November.

Chicago is also part of Cook County. The Government of Cook County is primarily composed of the Board of Commissioners, other elected officials such as the Sheriff, State's Attorney, Treasurer, Board of Review, Clerk, Assessor, Recorder, Circuit Court judges and Circuit Court Clerk, as well as numerous other officers and entities.