The Government of India (GoI), officially known as the Union Government and also known as the Central Government, was established by the Constitution of India, and is the governing authority of the union of 29 states and seven union territories, collectively called the Republic of India. It is located in New Delhi, the capital of India.

The basic civil and criminal laws governing the citizens of India are set down in major parliamentary legislation, such as the Civil Procedure Code, the Indian Penal Code, and the Criminal Procedure Code. The union and individual state governments all each consist of executive, legislative and judicial branches. The legal system as applicable to the federal and individual state governments is based on the English Common and Statutory Law. Because the seat of government is in New Delhi, "New Delhi" is commonly used as a metonym for the Central Government.: )

Legislative power in India is exercised by the Parliament, a bicameral legislature consisting of the President of India, the Rajya Sabha, and the Lok Sabha. Of the two houses of Parliament, the former is considered to be the upper house or the Council of States and consists of members appointed by the President and elected by the state and territorial legislatures. The latter is considered the lower house or the House of the people. 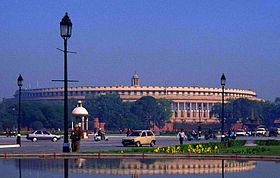 The Parliament of India in the background.

The Parliament does not enjoy complete sovereignty, as its laws are subject to judicial review by the Supreme Court of India. However, it does exercise some control over the executive branch. The members of the cabinet, including the prime minister and the Council of Ministers, are either chosen from parliament or elected there to within six months of assuming office. The cabinet as a whole is responsible to the Lok Sabha. The Lok Sabha is a temporary house and can only be dissolved when the party in power loses the support of the majority of the house. Whereas the Rajya Sabha is a permanent house which can never be dissolved though the members of the Rajya Sabha are elected for a six-year term. 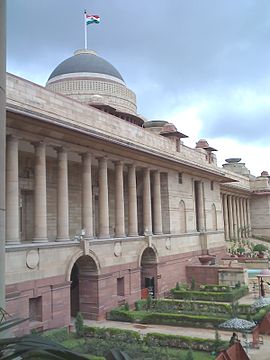 The Rashtrapati Bhawan, residence of the President of India.

The executive power is vested mainly in the President of India, as per Article 53 (1) of the constitution. The President enjoys all constitutional powers and exercises them directly or through officers subordinate to him as per the aforesaid Article 53(1).The President is to act in accordance with aid and advice tendered by the Prime Minister, who leads the Council of Ministers as described in Article 74 of the Constitution of India.

The President is responsible for making a wide variety of appointments. These include:[1]

The President is de jure the Commander in Chief of the Indian Armed Forces.[5] 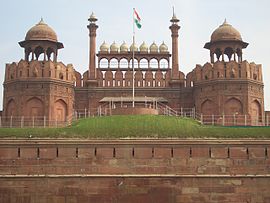 The Red Fort in New Delhi.
The Prime Minister of India addresses the nation on the occasion of Independence Day, from the ramparts of this fort.

The Prime Minister of India, as addressed to in the Constitution of India, is the chief of government, chief adviser to the President of India, head of the Council of Ministers and the leader of the majority party in the parliament. The prime minister leads the executive branch of the Government of India.

The Prime minister is the senior member of cabinet in the executive branch of government in a parliamentary system. The prime minister selects and can dismiss other members of the cabinet; allocates posts to members within the Government; is the presiding member and chairman of the cabinet and is responsible for bringing proposal of legislation. The resignation or death of the prime minister dissolves the cabinet.

The Prime minister is appointed by the president to assist the latter in the administration of the affairs of the executive.

Main articles: Cabinet of India and List of Indian agencies

The Cabinet of India includes the Prime Minister and his Cabinet Ministers.[6] Each Minister must be a member of one of the houses of India's Parliament. The Cabinet is headed by the Prime Minister, and is advised by the Cabinet Secretary - who also acts as the head of the Indian Administrative Service. Other Ministers are either as Union Cabinet Ministers, who are heads of the various Ministries; Ministers of State, who are junior members who report directly to one of the Cabinet Ministers, often overseeing a specific aspect of government; or Junior Ministers of State (Independent Charges), which do not report to a Cabinet Minister. As per article 88 of the constitution, every Minister shall have the right to speak in, and to take part in the proceedings of, either House, any joint sitting of the Houses, and any committee of Parliament of which he may be named a member, but shall not be entitled to a vote in the house where he is not a member. 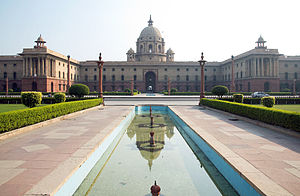 The Cabinet Secretariat of India.

The Cabinet Secretariat is responsible for the administration of the Government of India Transaction of Business Rules, 1961 and the Government of India Allocation of Business Rules 1961, facilitating smooth transaction of business in Ministries/Departments of the Government by ensuring adherence to these rules. The Secretariat assists in decision-making in Government by ensuring Inter-Ministerial coordination, ironing out differences amongst Ministries/Departments and evolving consensus through the instrumentality of the standing/ad hoc Committees of Secretaries. Through this mechanism new policy initiatives are also promoted. 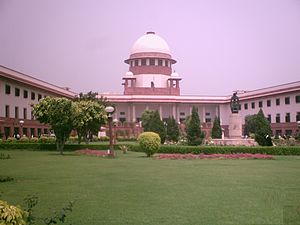 The Supreme Court of India.

India's independent union judicial system began under the British, and its concepts and procedures resemble those of Anglo-Saxon countries. The Supreme Court of India consists of a Chief Justice and 25 associate justices, all appointed by the President on the advice of the Chief Justice of India. The jury trials were abolished in India in early 1960s, after the famous case KM Nanavati v State of Maharashtra, for reasons of being vulnerable to media and public pressure, as well as to being misled.

Unlike its United States counterpart, the Indian justice system consists of a unitary system at both state and federal level. The judiciary consists of the Supreme Court of India, High Courts of India at the state level, and District Courts and Sessions Courts at the district level.

The Supreme Court of India is situated in New Delhi, the capital region of India. The Supreme Court of India original, appellate and advisory jurisdiction. Its exclusive original jurisdiction extends to any dispute between the Government of India and one or more states, or between the Government of India and any state or states on one side and one or more states on the other, or between two or more states, if and insofar as the dispute involves any question (whether of law or of fact) on which the existence or extent of a legal right depends.

In addition, Article 32 of the Indian Constitution gives an extensive original jurisdiction to the Supreme Court in regard to enforcing fundamental rights. It is empowered to issue directions, orders or writs, including writs in the nature of habeas corpus, mandamus, prohibition, quo warranto and certiorari to enforce them. The Supreme Court has been conferred with power to direct transfer of any civil or criminal case from one State High Court to another State High Court, or from a court subordinate to another State High Court and supreme court.

Although the proceedings in the Supreme Court arise out of the judgement or orders made by the subordinate courts, of late the Supreme Court has started entertaining matters in which interest of the public at large is involved, and the Court may be moved by any individual or group of persons either by filing a Writ Petition at the Filing Counter of the Court, or by addressing a letter to Hon'ble The Chief Justice of India highlighting the question of public importance for invoking this .

Main articles: Elections in India and Politics of India

India has a federal government, with elected officials at the federal (national), state and local levels. On a national level, the head of government, the Prime Minister, is elected appointed by the president of India amongst the party which won the majority seats in Loksabha. All members of the federal legislature, the Parliament, are directly elected. Elections in India take place every five years by universal adult suffrage through first-past-the-post voting system .

Local government function at the basic level. It is the third level of government apart from union and state governments. It consists of panchayats in rural areas and municipalities in urban areas. They are elected directly or indirectly by the people. 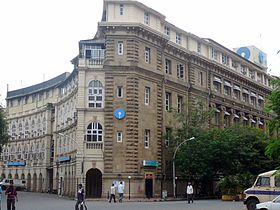 Regional office of the State Bank of India (SBI), India's largest bank, in Mumbai. The government of India is the largest shareholder in SBI.

The tax reforms, initiated in 1991, have sought to rationalise the tax structure and increase compliance by taking steps in the following directions:

Inter-state share in the federal tax pool is decided by the recommendations of the Finance Commission to the President.

Total tax receipts of Centre and State amount to approximately 18% of national GDP. This compares to a figure of 37–45% in the OECD.

Central Board of Direct Taxes

Organisational structure of the Central Board of Direct Taxes

The CBDT is headed by Chairman and also comprises six members, all of whom are ex officio Special Secretary to Government of India.The Investigation Division of the Central Board of Direct Taxes is also headed by a member of the CBDT.

The Chairman and Members of CBDT are selected from Indian Revenue Service (IRS), a premier civil service of India, whose members constitute the top management of Income Tax Department and other various departments.

The Finance minister of India presents the annual union budget in the Parliament on the last working day of February. The budget has to be passed by the Lok Sabha before it can come into effect on 1 April, the start of India's fiscal year. The Union budget is preceded by an economic survey which outlines the broad direction of the budget and the economic performance of the country for the outgoing financial year. This economic survey involves all the various NGOs, women organisations, business people, old people associations etc.

India's non-development revenue expenditure has increased nearly five-fold in 2003–04 since 1990–91 and more than tenfold since 1985–1986. Interest payments are the single largest item of expenditure and accounted for more than 40% of the total non-development expenditure in the 2003–04 budget. Defense expenditure increased fourfold during the same period and has been increasing because of India's desire to project its military prowess beyond South Asia. In 2007, India's defense spending stood at US$26.5 billion.

Overview of the index of perception of corruption, 2007

Several ministers are accused of corruption and nearly a quarter of the 543 elected members of parliament had been charged with crimes, including rape and murder, in 2009.[12]

The government provides subsidies on consumable rations like kerosene and agricultural produce as a welfare state.[13] Statutory Corporations like Food Corporation of India are compensated by the governments for any potential losses.[citation needed] Progressive attempts since Liberalisation have been made both at the state and the central level to rationalise these subsidies through commoditisation & through economies of scale with varying results.[citation needed] Farmers are given electricity at nominal rates so as to stimulate agricultural production.[citation needed]

On the other hand, India spends relatively little on education, health, or infrastructure. According to UNESCO, India has a very low public expenditure on higher education per student as compared to other developing and developed countries.[14]