The government of the U.S. state of Ohio consists of the executive,[1] judicial,[2] and legislative[3] branches. Its basic structure is set forth in the Constitution and law of Ohio.

There are six officials elected statewide:

All are elected statewide for four-year terms, all on a partisan ballot, with the Governor and Lieutenant Governor elected on a single ticket.

Main article: Cabinet of the Governor of Ohio

The state government is primarily organized into several cabinet or administrative departments:[4][5]

Notices and proposed rules are published in the Register of Ohio,[6] which are codified in the Ohio Administrative Code (OAC).[7][8]

In order to be enacted into law, a bill must be adopted by both houses of the General Assembly and signed by the Governor. If the Governor vetoes a bill, the General Assembly can override the veto with a three-fifths supermajority of both houses. A bill will also become a law if the Governor fails to sign or veto it within 10 days of its being presented. The session laws are published in the official Laws of Ohio.[9] These in turn have been codified in the Ohio Revised Code.[10]

The judicial branch is headed by the Ohio Supreme Court, which has one chief justice and six associate justices, each elected to staggered six-year terms. 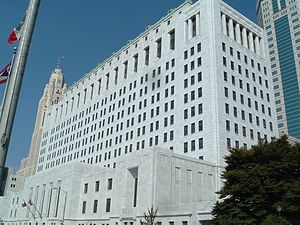 There are several other levels of elected judiciary in the Ohio court system: 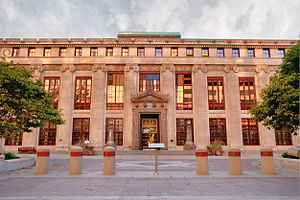 Ohio is divided into 88 counties.[11] Ohio law defines a structure for county government, although they may adopt charters for home rule.[12][13] Summit County[12] and Cuyahoga County[citation needed] have chosen an alternate form of government, while all of the other counties have elected officers that include: three county commissioners (the county board of commissioners),[14] a sheriff,[15] coroner,[16] auditor,[17] treasurer,[18] clerk of the court of common pleas[19] prosecutor,[20] engineer,[21] and recorder.[22]

There are two kinds of incorporated municipalities, 251 cities and 681 villages.[12][23][24] If a municipality has five thousand or more residents as of the last United States Census it is a city, otherwise it is a village.[12][25] Municipalities have full home rule powers, may adopt a charter, ordinances and resolutions for self-government.[26] Each municipality chooses its own form of government, but most have elected mayors and city councils or city commissions. City governments provide much more extensive services than county governments, such as police forces and professional (as opposed to volunteer) fire departments. 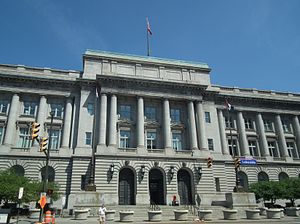