The Government of the Kingdom of Sweden (Swedish: Konungariket Sveriges regering) is the national cabinet and the supreme executive authority in Sweden. The short-form name Regeringen ("the Government") is used both in the Fundamental Laws of the Realm and in the vernacular, while the long-form is only used in international treaties.[1]

The Government operates as a collegial body with collective responsibility and consists of the Prime Minister — appointed and dismissed by the Speaker of the Riksdag (following an actual vote in the Riksdag before an appointment can be made) — and other cabinet ministers (Swedish: Statsråd), appointed and dismissed at the sole discretion of the Prime Minister. The Government is responsible for its actions to the Riksdag.[1]

Following the adoption of the 1974 Instrument of Government on 1 January 1975 — the Government in its present constitutional form was constituted — and in consequence thereof the Swedish Monarch is no longer vested any nominal executive powers at all with respect to the governance of the Realm, but continues to serve as a strictly ceremonial head of state.[2]

Main articles: Politics of Sweden and Prime Minister of Sweden 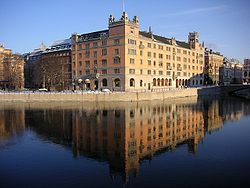 Rosenbad, in central Stockholm, has been the seat of the Government since 1981.[3]

— The Government governs the Realm. It is accountable to the Riksdag.[1]

The Instrument of Government (Swedish: Regeringsformen) - one of the Fundamental Laws of the Realm - sets out the main responsibilities and duties of the Government (including the Prime Minister and other cabinet ministers) and how it relates to other organs of the State.[1]

— The Chancellor of Justice and other State administrative authorities come under the Government, unless they are authorities under the Riksdag according to the present Instrument of Government or by virtue of other law.[1]

While the Judiciary technically sort under the Government in the fiscal sense, Chapter 11 of the Instrument of Government provides safeguards to ensure its independence.[1][4]

In a unique feature of the Swedish constitutional system, individual cabinet ministers do not bear any individual ministerial responsibility for the performance of the agencies within their portfolio; as the director-generals and other heads of government agencies reports directly to the Government as a whole; and individual ministers are prohibited to interfere (thus the origin of the pejorative (in Swedish political parlance) term ministerstyre (English: "ministerial rule") in matters that are to be handled by the individual agencies, unless otherwise specifically provided for in law. 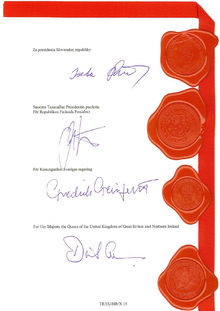 Image of the signature blocks with seals of the 2011 Croatia EU Accession Treaty for Slovakia, Finland, Sweden and the United Kingdom. Note that Sweden is the only one of the four not with its head of state as high contracting party.

The Government of Sweden is the high contracting party when entering treaties with foreign sovereign states and international organisations (such as the European Union), as per 10:1 of the Instrument of Government.[1] In most other parliamentary systems (monarchies and republics alike) this formal function is usually vested in the head of state but exercised by ministers in such name.

Chapter 6, Article 7 prescribes that laws and ordinances are promulgated by the Government (by the Prime Minister or other cabinet minister),[1] and are subsequently published in the Swedish Code of Statutes (Swedish: Svensk författningssamling).[5]

Following a general election, Speaker of the Riksdag begins to hold talks with the leaders of the parties with representation in the Riksdag, the Speaker then nominates a candidate for Prime Minister (Swedish: Statsminister). The nomination is then put to a vote in the chamber. Unless an absolute majority of the members (175 members) votes "no", the nomination is confirmed, otherwise it is rejected. The Speaker must then find a new nominee. This means the Riksdag can consent to a Prime Minister without casting any "yes" votes.

If a vote of no confidence is cast against the Prime Minister this means the entire government is rejected. A losing government has one week to call for a general election or else the procedure of nominating a new Prime Minister starts anew. 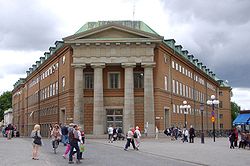 Chancellery House (Swedish: Kanslihuset) was the seat of the Government Offices until 1981, and the housed its predecessor, the Royal Chancery, dating back to the days of the Royal Palace fire in 1697.[17] 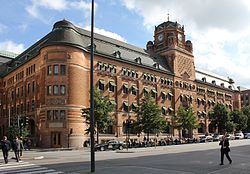 The Central Post Office Building, houses the Ministry of Enterprise.

Previously known as the Royal Chancery (Swedish: Kunglig Majestäts kansli), the name was changed to the Government Offices (Swedish: Regeringskansliet) on 1 January 1975 with the current Instrument of Government entering into effect.[18]

Only current ministries and offices are listed below:[20]