In 1858, the territories of the East India Company came under the direct control of the British government; see British Raj. The governor-general (now also the viceroy) headed the central government of India, which administered the provinces of British India, including the Punjab, Bengal, Bombay, Madras, the United Provinces, and others.[1] However, much of India was not ruled directly by the British government; outside the provinces of British India, there were hundreds of nominally sovereign princely states or "native states", whose relationship was not with the British government, but directly with the monarch. To reflect the governor-general's role as the representative of the monarch to the feudal rulers of the princely states, from 1858 the term Viceroy and Governor-General of India (known in short as the Viceroy of India) was applied to him.

The title of viceroy was abandoned when India and Pakistan gained their independence, but the office of governor-general continued to exist—as representatives of George VI as King of India and King of Pakistan, respectively—until they adopted republican constitutions in 1950 and 1956.

Until 1858, the governor-general was selected by the Court of Directors of the East India Company, to whom he was responsible. Thereafter, he was appointed by the sovereign on the advice of the British government; the Secretary of State for India, a member of the UK Cabinet, was responsible for instructing him on the exercise of his powers. After 1947, the sovereign continued to appoint the governor-general, but did so on the advice of the Indian government. 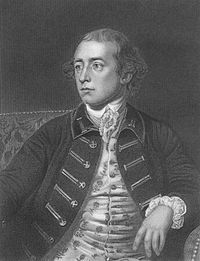 Warren Hastings, the first Governor-General of Fort William from 1773 to 1785.

Many parts of the Indian peninsula were governed by the East India Company, which nominally acted as the agent of the Mughal Emperor. In 1773, motivated by corruption in the Company, the British government assumed partial control over the governance of India with the passage of the Regulating Act of 1773. A Governor-General and Supreme Council of Bengal were appointed to rule over the Presidency of Fort William in Bengal. The first Governor-General and Council were named in the Act; their successors were to be elected by the East India Company's Court of Directors. The Act provided for a five-year term for the Governor-General and Council, but the Sovereign had the power to remove any of them.[citation needed]

India and Pakistan acquired independence in 1947, but Governors-General continued to be appointed over each nation until republican constitutions were written. Louis Mountbatten, 1st Earl Mountbatten of Burma remained Governor-General of India for some time after independence, but the two nations were otherwise headed by native Governors-General. India became a secular republic in 1950; Pakistan became an Islamic one in 1956. 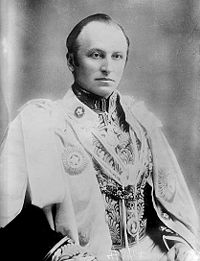 The Governor-General originally had power only over the Presidency of Fort William in Bengal. The Regulating Act, however, granted them additional powers relating to foreign affairs and defence. The other Presidencies of the East India Company (Madras, Bombay and Bencoolen) were neither allowed to declare war on nor make peace with an Indian prince without receiving the prior approval of the Governor-General and Council of Fort William.[citation needed]

The powers of the Governor-General in respect of foreign affairs were increased by the India Act 1784. The Act provided that the other Governors under the East India Company could not declare war, make peace or conclude a treaty with an Indian prince unless expressly directed to do so by the Governor-General, or by the Company's Court of Directors.

While the Governor-General thus became the controller of foreign policy in India, he was not the explicit head of British India. This status only came with the Charter Act 1833, which granted him "superintendence, direction and control of the whole civil and military Government" of all of British India. The Act also granted legislative powers to the Governor-General and Council.

After 1858, the Governor-General (henceforth usually known as the Viceroy) functioned as the chief administrator of India and as the Sovereign's representative. India was divided into numerous provinces, each under the head of a Governor, Lieutenant Governor or Chief Commissioner or Administrator. Governors were appointed by the British Government, to whom they were directly responsible; Lieutenant Governors, Chief Commissioners, and Administrators, however, were appointed by and were subordinate to the Viceroy. The Viceroy also oversaw the most powerful princely rulers: the Nizam of Hyderabad, the Maharaja of Mysore, the Maharaja (Scindia) of Gwalior, the Maharaja of Jammu and Kashmir and the Gaekwad (Gaekwar) Maharaja of Baroda. The remaining princely rulers were overseen either by the Rajputana Agency and Central India Agency (which were headed by representatives of the Viceroy), or by provincial authorities.

The Chamber of Princes was an institution established in 1920 by a Royal Proclamation of the King-Emperor to provide a forum in which the princely rulers could voice their needs and aspirations to the government. The chamber usually met only once a year, with the Viceroy presiding, but it appointed a Standing Committee which met more often.

Upon independence in August 1947, the title of Viceroy was abolished. The representative of the British Sovereign became known once again as the Governor-General. C. Rajagopalachari became the only Indian Governor-General. However, once India acquired independence, the Governor-General's role became almost entirely ceremonial, with power being exercised on a day-to-day basis by the Indian cabinet. After the nation became a republic in 1950, the President of India continued to perform the same functions.

The Viceregal Lodge in Simla, built in 1888, was the summer residence of the Viceroy of India 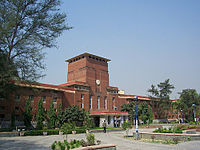 The Regulating Act 1773 provided for the election of four counsellors by the East India Company's Court of Directors. The Governor-General had a vote along with the counsellors, but he also had an additional vote to break ties. The decision of the Council was binding on the Governor-General.

The Charter Act 1833 made further changes to the structure of the Council. The Act was the first law to distinguish between the executive and legislative responsibilities of the Governor-General. As provided under the Act, there were to be four members of the Council elected by the Court of Directors. The first three members were permitted to participate on all occasions, but the fourth member was only allowed to sit and vote when legislation was being debated.

In 1858, the Court of Directors ceased to have the power to elect members of the Council. Instead, the one member who had a vote only on legislative questions came to be appointed by the Sovereign, and the other three members by the Secretary of State for India.

The Indian Councils Act 1861 made several changes to the Council's composition. Three members were to be appointed by the Secretary of State for India, and two by the Sovereign. (The power to appoint all five members passed to the Crown in 1869). The Viceroy was empowered to appoint an additional six to twelve members (changed to ten to sixteen in 1892, and to sixty in 1909). The five individuals appointed by the Sovereign or the Indian Secretary headed the executive departments, while those appointed by the Viceroy debated and voted on legislation.

In 1919, an Indian legislature, consisting of a Council of State and a Legislative Assembly, took over the legislative functions of the Viceroy's Council. The Viceroy nonetheless retained significant power over legislation. He could authorize the expenditure of money without the Legislature's consent for "ecclesiastical, political [and] defense" purposes, and for any purpose during "emergencies." He was permitted to veto, or even stop debate on, any bill. If he recommended the passage of a bill, but only one chamber cooperated, he could declare the bill passed over the objections of the other chamber. The Legislature had no authority over foreign affairs and defense. The President of the Council of State was appointed by the Viceroy; the Legislative Assembly elected its President, but the election required the Viceroy's approval.

The Governor-General was styled Excellency and enjoyed precedence over all other government officials in India. He was referred to as 'His Excellency' and addressed as 'Your Excellency'. From 1858 to 1947, the Governor-General was known as the Viceroy of India (from the French roi, meaning 'king'), and wives of Viceroys were known as Vicereines (from the French reine, meaning 'queen'). The Vicereine was referred to as 'Her Excellency' and was also addressed as 'Your Excellency'. Neither title was employed while the Sovereign was in India. However, the only reigning British Sovereign to visit India during the period of British rule was King George V, who accompanied by his consort Queen Mary attended the Delhi Durbar in 1911.[citation needed]

Most Governors-General and Viceroys were peers. Frequently, a Viceroy who was already a peer would be granted a peerage of higher rank, as with the granting of a marquessate to Lord Reading and an earldom and later a marquessate to Freeman Freeman-Thomas. Of those Viceroys who were not peers, Sir John Shore was a baronet, and Lord William Bentinck was entitled to the courtesy title 'Lord' because he was the son of a Duke. Only the first and last Governors-General – Warren Hastings and Chakravarti Rajagopalachari – as well as some provisional Governors-General, had no honorific titles at all.

From around 1885, the Viceroy of India was allowed to fly a Union Flag augmented in the centre with the 'Star of India' surmounted by a Crown. This flag was not the Viceroy's personal flag; it was also used by Governors, Lieutenant Governors, Chief Commissioners and other British officers in India. When at sea, only the Viceroy flew the flag from the mainmast, while other officials flew it from the foremast.

From 1947 to 1950, the Governor-General of India used a dark blue flag bearing the royal crest (a lion standing on the Crown), beneath which was the word 'India' in gold majuscules. The same design is still used by many other Commonwealth Realm Governors-General. This last flag was the personal flag of the Governor-General only.

Government House served as the Governor-General's residence during most of the nineteenth century.

The Governor-General of Fort William resided in Belvedere House, Calcutta, until the early nineteenth century, when Government House was constructed. In 1854, the Lieutenant Governor of Bengal took up residence there. Now, the Belvedere Estate houses the National Library of India.

Lord Wellesley, who is reputed to have said that 'India should be governed from a palace, not from a country house', constructed a grand mansion, known as Government House, between 1799 and 1803. The mansion remained in use until the capital moved from Calcutta to Delhi in 1912. Thereafter, the Lieutenant Governor of Bengal, who had hitherto resided in Belvedere House, was upgraded to a full Governor and transferred to Government House. Now, it serves as the residence of the Governor of the Indian state of West Bengal, and is referred to by its Bengali name Raj Bhavan.

After the capital moved from Calcutta to Delhi, the Viceroy occupied the newly built Viceroy's House, designed by Sir Edwin Lutyens. Though construction began in 1912, it did not conclude until 1929; the palace was not formally inaugurated until 1931. The final cost exceeded £877,000 (over £35,000,000 in modern terms) – more than twice the figure originally allocated. Today the residence, now known by the Hindi name of 'Rashtrapati Bhavan', is used by the President of India.

Throughout the British administration, Governors-General retreated to the Viceregal Lodge (Rashtrapati Niwas) at Shimla each summer to escape the heat, and the government of India moved with them. The Viceregal Lodge now houses the Indian Institute of Advanced Study.