Governor Phillip Tower, Governor Macquarie Tower and the Museum of Sydney are the main elements of one of the largest developments in the City of Sydney. Completed in 1994, they occupy an elevated site in the Central Business District’s prestigious north-east area. It incorporates the site of the first Government House, one of Australia’s earliest and most significant National Heritage sites. The address is 1 Farrer Place, Sydney. Designed by architects Denton Corker Marshall and built by Australia's largest privately owned construction company Grocon, it is regarded as achieving new standards for Sydney commercial architecture in terms of finish quality and design.

The northern end of the site, which faces Bridge Street, is considered one of Australia’s most important historically, as it contains the remains of the country’s first substantial building, First Government House. Integral to the development was the conservation of the archaeological remains and their incorporation into the Museum of Sydney, which was built and opened at the same time. 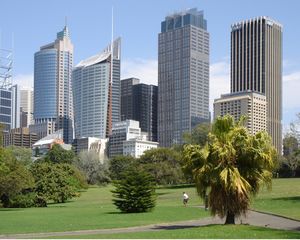 Governor Phillip Tower (second from the right) and the AMP Centre, Aurora Place and Chifley Tower

With construction starting only months after the arrival of the British First Fleet in 1788, the First Government House dates from the very start of Australian European History. It was the first substantial building to be constructed in Australia. The elevated site was prominent, overlooking Sydney Cove, and the building was at the centre of its colonial government and commerce for the first 60 years.[1] It was demolished in 1845 although significant foundation remains have now been conserved and interpreted. The First Government House site is one of six sites in the Sydney area listed on the Australian Department of Environment and Heritage Australian National Heritage List.

The northern Bridge Street end of the site remained vacant for 50 years. In the 1970s and 80s criticism grew over the hole in the prestigious centre of Sydney’s finance district, an area of imposing sandstone buildings and colonial history, with several modern premium office towers interspersed. In 1982 a development application for a high rise office building was approved but archaeological investigations in 1983 revealed parts of the footings of First Government House. A new-found awareness around Australia of the nation’s history was emerging at the time, and the suggestion of a high rise office building on the top of the virtual cradle of the country’s European history met with wide opposition.

The New South Wales Government found a solution by transferring floor space from, what had virtually become a holy site, to space immediately behind to the south. Space owned by developer Sid Londish was used, who masterminded the amalgamation of the whole site, making the project commercially viable. The resultant site covers a whole block bound by Bridge, Bent, Phillip and Young Streets. 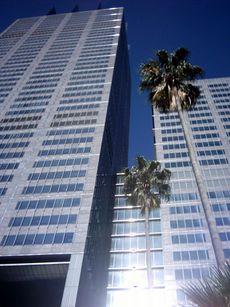 Governor Phillip Tower dominates the site. It sits 10 floors above street level on a series of large zinc-plated transfer beams atop a 4-level sandstone-clad podium (upon which Governor Macquarie Tower also sits). This maximises views, and hence rentals, for all levels. Opinion, however, is mixed on how well this massive 10-storey base contributes to the building’s relationship with the street.

The façade is of grey granite and glass used to achieve an expensive and highly detailed finish. The steel-bladed roof features have been dubbed the milk-crate.

At 227m to the roof, it is the 3rd tallest building in the city by roof height (sixth by spire height), although the taller MLC Centre and World Tower are both only fractionally taller with a 228m roof height. It is arguably the most visually dominating building on the Sydney CBD skyline. From many prominent angles, and significantly from most Sydney Harbour viewpoints, it appears as the tallest building on the skyline by a large margin; however, this is perspective illusion.

Governor Macquarie Tower stands at 41 storeys and is adjacent and south of Governor Phillip Tower. It has identical façade treatments but its form and massing are significantly different with no dramatic roof structure, and it has staggered, rather than sheer lines. The primary tenant is the New South Wales Government including the Premier’s Office. It occupies the site of the former Legal & General building which at the time was the tallest building to have been demolished in Sydney.

The main entry to both buildings is from Farrer Place. They share what is arguably Sydney’s most impressive and grandiose foyer, which links the two buildings and provides another entrance from Phillip Street. 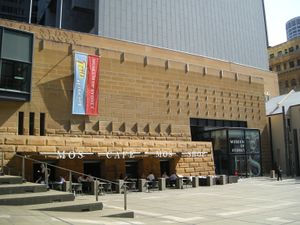 Main entrance to the Museum of Sydney. Note the outline of the First Government House foundations built into the pavement.

First Government House Plaza is an open-air public space and part of Museum of Sydney, situated at Bridge Street end of the site. The design is minimalist and disciplined, intended to evoke a sense of the site’s past. Paving covers the majority of the First Government House remains, however the individual pavers can be removed and the remains viewed through a glass pyramid. The outline of original building is marked through the paving pattern.

Criticism of the complex has included the vast, even oppressive scale of the main tower, particularly at street level, and a perceived awkward and disjointed relationship between the two towers.

Architecturally, the museum and plaza are considered by many to be the most successful aspect of the development. And although the massive and dominating structure’s relationship to the street has often been questioned, it is widely recognised as a development of very high quality; “This is no cheap, slap-stick developer job. Nor is it post-modern New York deco pastiche...one of the most interesting and important building developments that Sydney has seen...and adding a great deal of intellectual content and game-playing.” said architectural critic Francesca Morrison.[2]