From Infogalactic: the planetary knowledge core
(Redirected from Governor of Alabama)
Jump to: navigation, search

The Governor of Alabama is the chief executive of the U.S. state of Alabama. The governor is the head of the executive branch of Alabama's state government and is charged with enforcing state laws. The governor has the power to either approve or veto bills passed by the Alabama Legislature, to convene the legislature, and to grant pardons, except in cases of impeachment.[2] The governor is also the commander-in-chief of the state's military forces.

The longest-serving governor was George Wallace, who served sixteen years over four terms. The shortest term for a non-acting governor was that of Hugh McVay, who served four and a half months after replacing the resigning Clement Comer Clay. Lurleen Wallace, wife of George Wallace, was the first and so far only woman to serve as governor of Alabama, and the third woman to serve as governor of any state. The current governor is Republican Robert J. Bentley, who took office on January 17, 2011.

Governor of the Territory of Alabama

For the period before Alabama Territory was formed, see the list of Governors of Mississippi Territory.

Alabama Territory was formed on March 3, 1817, from Mississippi Territory. It had only one governor appointed by the President of the United States before it became a state; he became the first state governor.

Governors of the State of Alabama 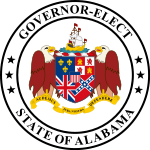 Seal for use by the Governor-Elect

Alabama was admitted to the Union on December 14, 1819. It seceded from the Union on January 11, 1861 and was a founding member of the Confederate States of America on February 4, 1861; there was no Union Alabama government in exile, so there was a single line of governors. Following the end of the American Civil War, Alabama during Reconstruction was part of the Third Military District, which exerted some control over governor appointments and elections. Alabama was readmitted to the Union on July 14, 1868.

The first Alabama Constitution, ratified in 1819, provided that a governor be elected every two years, limited to serve no more than four out of every six years.[5] This limit remained in place until the constitution of 1868, which simply allowed governors to serve terms of two years.[6] The current constitution of 1901 increased terms to four years,[7] but prohibited governors from succeeding themselves.[8] Amendment 282 to the constitution, passed in 1968, allowed governors to succeed themselves once.[9] The constitution had no set date for the commencement of a governor's term until 1901, when it was set at the first Monday after the second Tuesday in the January following an election.[8]

Alabama was a strongly Democratic state before the Civil War, electing only candidates from the Democratic-Republican and Democratic parties. It had two Republican governors following Reconstruction, but after the Democratic Party re-established control, 112 years passed before voters chose another Republican.

Nineteen of Alabama's governors have served other high offices, including one ambassador and one Confederate cabinet member. Fifteen represented Alabama in the U.S. Congress, while two represented Alabama in the Provisional Confederate Congress. Additionally, two were elected to the U.S. Senate shortly after the American Civil War, but were not allowed to take office.

There are six living former governors of Alabama, the oldest being John M. Patterson. The most recent death of a former governor was that of H. Guy Hunt (1987-1993) on January 30, 2009.