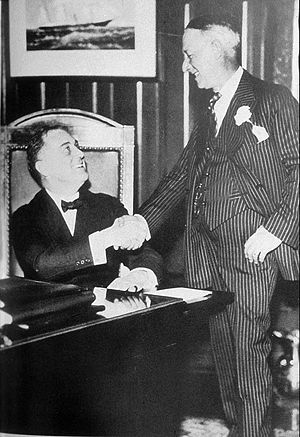 Governor Roosevelt poses with his predecessor Al Smith for a publicity shot in Albany, New York, 1930

Franklin D. Roosevelt was elected governor of New York in 1928 and served from 1 January 1929 until his election as President of the United States in 1932. His term as governor provided him with a high-visibility position in which to prove himself as well as provide a major base from which to launch a bid for the presidency.

After several years out of politics following his defeat for vice president in the 1920 presidential election, by 1928, Roosevelt believed he had recovered sufficiently to resume his political career. He had been careful to maintain his contacts in the Democratic Party. In 1924, he had attended the 1924 Democratic National Convention and made a presidential nomination speech for the then-governor of New York, Al Smith. Although Smith was not nominated, he ran again in 1928, and Roosevelt again supported him. This time, he became the Democratic candidate, and he urged Roosevelt to run for governor of New York.

With one month before the November election the New York State Democrats had not yet chosen anyone to replace Smith, who needed a strong gubernatorial candidate to run to help him win the state's 47 electoral votes. Although Roosevelt was the ideal complement to Smith as a prominent rural Protestant without strong views on Prohibition who had supported Woodrow Wilson, he was very reluctant to run. Roosevelt was not sure he would win, and wished to continue his physical therapy at Warm Springs. Close aide Louis Howe urged him to wait; as Herbert Hoover would surely defeat Smith and likely serve two terms as president, being elected governor in 1932 would be better timing for the 1936 presidential election. After failing to persuade Roosevelt through many phone calls and telegrams from late September, Smith finally got him to agree on 2 October to run if nominated; the state convention did so the next day.[1] Roosevelt had to make his peace with Tammany Hall, which he did with some reluctance. In the November election, Smith was heavily defeated by Republican candidate Herbert Hoover, but Roosevelt was elected governor by a margin of 25,608 votes out of more than 4 million votes cast,[2] defeating Republican candidate Albert Ottinger.

Roosevelt came to office in 1928 as a reform Democrat, but with no overall plan. He tackled official corruption by dismissing Smith's cronies and instituting the New York Public Service Commission. He addressed New York's growing need for power through the development of hydroelectricity on the St. Lawrence River. He reformed the state's prison administration and built a new state prison at Attica. He had a long feud with Robert Moses, the state's most powerful public servant, whom he removed as Secretary of State but kept on as Parks Commissioner and head of urban planning. When the Wall Street crash in October 1929 ushered in the Great Depression, Roosevelt started a relief system that later became the model for the New Deal's Federal Emergency Relief Administration (FERA). Roosevelt followed President Herbert Hoover's advice and asked the state legislature for $20 million in relief funds, which he spent mainly on public works in the hope of stimulating demand and providing employment. Aid to the unemployed, he said, "must be extended by Government, not as a matter of charity, but as a matter of social duty." In his first term, Roosevelt famously said, "The United States Constitution has proved itself the most marvelously elastic compilation of rules of government ever written." He was referring to the belief he had that the Federal government would need to use more power in order to bring the country out of the Depression.

Roosevelt took advice from leading academics and social workers, and also from Eleanor, who had developed a network of friends in the welfare and labor fields and who took a close interest in social questions. On Eleanor's recommendation, he appointed one of her friends, Frances Perkins, as Labor Secretary, and there was a sweeping reform of the labor laws. He established the first state relief agency under Harry Hopkins, who became a key adviser, and urged the legislature to pass an old age pension bill and an unemployment insurance bill. Roosevelt entered the governorship with a $15 million budget surplus left by previous governor Al Smith and left the state with a $90 million deficit.

The main weakness of the Roosevelt administration was the blatant corruption of the Tammany Hall machine in New York City, where the mayor, Jimmy Walker, was the puppet of Tammany boss John F. Curry, and where corruption of all kinds was rife. Roosevelt had made his name as an opponent of Tammany[citation needed], but he needed the machine's goodwill to be re-elected in 1930 and for a possible future presidential bid. Roosevelt fell back on the line that the governor could not interfere in the government of New York City.[citation needed] But as the 1930 election approached, Roosevelt acted by setting up a judicial investigation into the corrupt sale of offices.