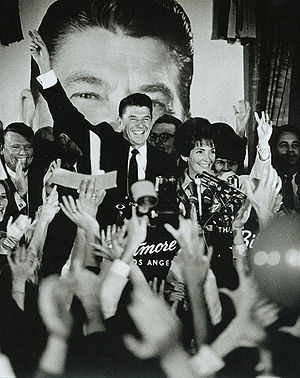 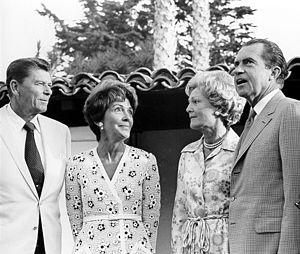 Ronald Reagan was the governor of California for two terms, once in 1967 and again in 1971. He left office in 1975, declining to run for a third term. Robert Finch, Edwin Reinecke, and John L. Harmer served as lieutenant governors over the course of Reagan's time as governor.

California Republicans were impressed with Reagan's political views and charisma after his "A Time for Choosing" speech,[1] and nominated him as the Republican party candidate for Governor in 1966.[2][3]

Reagan's campaign emphasized two main themes: "to send the welfare bums back to work", and regarding burgeoning anti-war and anti-establishment student protests at the University of California at Berkeley, "to clean up the mess at Berkeley".[4] He was elected, defeating two-term governor Edmund G. "Pat" Brown by nearly a million votes, and was sworn in on January 2, 1967 at ten minutes past midnight.[5] In 1988, Reagan explained that this time was chosen because his predecessor, Governor Brown, "had been filling up the ranks of appointments and judges" in the days before his term ended. Professor Marcello Truzzi, a sociologist at Eastern Michigan University who studied the Reagans' interest in astrology, regarded this explanation as "preposterous", as the decision to be sworn in at that odd time of day was made six weeks earlier, and was based on advice from Reagan's long-time friend, the astrologer Carroll Righter.[6]

Reagan was elected to his first term as Governor of California on November 8, 1966 with 57.65% of the vote.

In his first term, he froze government hiring and approved tax hikes to balance the budget.[7] Shortly after the beginning of his term, Reagan tested the presidential waters in 1968 as part of a "Stop Nixon" movement, hoping to cut into Nixon's Southern support[8] and be a compromise candidate[9] if neither Nixon nor second-place Nelson Rockefeller received enough delegates to win on the first ballot at the Republican convention. However, by the time of the convention Nixon had 692 delegate votes, 25 more than he needed to secure the nomination, followed by Rockefeller with Reagan in third place.[8]

Reagan was involved in high-profile conflicts with the protest movements of the era. On May 15, 1969, during the People's Park protests at UC Berkeley, Reagan sent the California Highway Patrol and other officers to quell the protests, in an incident that became known as "Bloody Thursday".[10][11] Reagan then called out 2,200 state National Guard troops to occupy the city of Berkeley for two weeks in order to crack down on the protesters.[10] When the Symbionese Liberation Army kidnapped Patty Hearst in Berkeley and demanded the distribution of food to the poor, Reagan joked, "It's just too bad we can't have an epidemic of botulism."[12]

Early in 1967, the national debate on abortion was beginning. Democratic California state senator Anthony Beilenson introduced the "Therapeutic Abortion Act", in an effort to reduce the number of "back-room abortions" performed in California.[10] The State Legislature sent the bill to Reagan's desk where, after several days of indecision, he signed it.[13] About two million abortions would be performed as a result, mostly because of a provision in the bill allowing abortions for the well-being of the mother.[13] Reagan had been in office for only four months when he signed the bill, and stated that had he been more experienced as governor, it would not have been signed. After he recognized what he called the "consequences" of the bill, he announced that he was pro-life.[13] He maintained that position later in his political career, writing extensively about abortion.[14]

Reagan made addresses to people which were similar to Franklin Delano Roosevelt's fireside chats.[citation needed]

An unsuccessful attempt to recall Reagan in 1968[15] was supported by senior citizens, educators, and organized labor.[16] Reagan was re-elected in 1970, defeating "Big Daddy" Jesse M. Unruh on November 3 with 52.85% of the vote. He chose not to seek a third term in the following election cycle. One of Reagan's greatest frustrations in office concerned capital punishment, which he strongly supported.[17] His efforts to enforce the state's laws in this area were thwarted when the Supreme Court of California issued its People v. Anderson decision, which invalidated all death sentences issued in California prior to 1972, though the decision was later overturned by a constitutional amendment. The only execution during Reagan's governorship was on April 12, 1967, when Aaron Mitchell's sentence was carried out by the state in San Quentin's gas chamber.[18]

Reagan wrote that the tax increase, in combination with the spending cuts, had created revenue surpluses, so he gave four tax rebates to the people, which he claimed to have amounted to over $5 billion.[citation needed]

During his Governorship, Reagan was sent to many nations by Nixon as a special envoy.[citation needed]

Reagan's terms as governor helped to shape the policies he would pursue in his later political career as president. By campaigning on a platform of sending "the welfare bums back to work", he spoke out against the idea of the welfare state. He also strongly advocated the Republican ideal of less government regulation of the economy, including that of undue federal taxation.[19]