From Infogalactic: the planetary knowledge core
Jump to: navigation, search
Not to be confused with Graham, North Carolina. 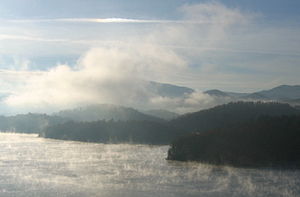 Fontana Lake, an impoundment of the Little Tennessee River, forms most of the northern border of the county, with the Great Smoky Mountains National Park on the other side of the lake. Fontana Lake is formed by Fontana Dam, the tallest dam in the eastern U.S. The remainder of the northern boundary of Graham County is almost completely formed by another impoundment of the Little Tennessee River, downstream from Fontana Dam, created by Cheoah Dam. Fontana Dam and Cheoah Dam are both operated by the Tennessee Valley Authority.

The Appalachian Trail winds through Graham County. Part of the trail is located on top of Fontana Dam. The Cheoah River is noted for its Class IV and Class V whitewater rapids. The river is used for whitewater rafting about 17 days per year, based on a water-release schedule from Santeetlah Dam. Seventy-five percent of Lake Santeetlah shoreline borders national forest.

The Cherokee name for the area, Nantahala, is translated as "land of the noon-day sun" because 90% of the land is slopes of 30 degrees or greater, suggesting that in the valleys one sees the sun only in the middle of the day.[6]

Graham County is a member of the regional Southwestern Commission council of governments. The county is the only dry county in North Carolina, the only one in which alcohol sales are forbidden.[13] 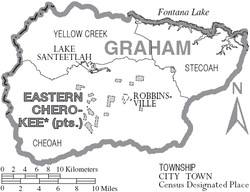 Other communities in Graham County include Almond, Atoah, Fontana Heights, Fontana Dam, Fontana Village, Snowbird, Stecoah Valley, Sweetwater, Tapoco (named for the Tallassee Power Company[15]), and Tuskeegee. Tallulah, a community just south of Robbinsville, may have been named for a mythological Cherokee Indian. Many smaller communities in Graham County are named for bodies of water, notable landscape features, or early settlers. These include Meadow Branch, Yellow Creek, and Sawyers Creek.