From Infogalactic: the planetary knowledge core
Jump to: navigation, search
This article is about the British racing driver. For the Zimbabwean academic, see Graham Hill (academic). For the Australian judge, see Graham Hill (judge).

Norman Graham Hill OBE[2] (15 February 1929 – 29 November 1975) was a British racing driver and team owner from England, who was twice Formula One World Champion. He is the only driver ever to win the Triple Crown of Motorsport—the 24 Hours of Le Mans, Indianapolis 500 and the Monaco Grand Prix.[3][4] He also appeared on TV in the 1970s on a variety of non sporting programmes including panel games.

Hill and his son Damon are the only father and son pair to have both won the Formula One World Championship. Hill's grandson Josh, Damon's son, also raced his way through the ranks till he retired from Formula Three in 2013 at the age of 22.

Hill died when the Piper Aztec aeroplane he was piloting crashed in foggy conditions near Arkley golf course in North London. Hill, Tony Brise and four other members of Hill's racing team were returning from car testing at Circuit Paul Ricard in France and were due to land at Elstree Airfield. All six were killed. 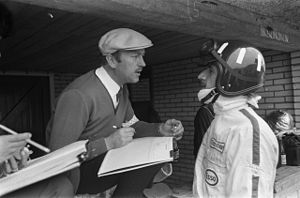 Hill and Colin Chapman at the 1967 Dutch Grand Prix.

Hill did not pass his driving test until he was 24 years old, and he himself described his first car as "A wreck. A budding racing driver should own such a car, as it teaches delicacy, poise and anticipation, mostly the latter I think!"[citation needed] He had been interested in motorcycles but in 1954 he saw an advertisement for the Universal Motor Racing Club at Brands Hatch offering laps for 5 shillings. He made his debut in a Cooper 500 Formula 3 car and was committed to racing thereafter. Hill joined Team Lotus as a mechanic soon after but quickly talked his way into the cockpit. The Lotus presence in Formula One allowed him to make his debut at the 1958 Monaco Grand Prix, retiring with a halfshaft failure.

In 1960, Hill joined BRM, and won the world championship with them in 1962. Hill was also part of the so-called 'British invasion' of drivers and cars in the Indianapolis 500 during the mid-1960s, triumphing there in 1966 in a Lola-Ford. 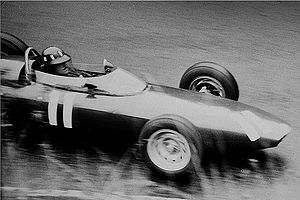 Hill at the 1962 German Grand Prix

In 1967, back at Lotus, Hill helped to develop the Lotus 49 with the new Cosworth-V8 engine. After team mates Jim Clark and Mike Spence were killed in early 1968, Hill led the team, and won his second world championship in 1968. The Lotus had a reputation of being very fragile and dangerous at that time, especially with the new aerodynamic aids which caused similar crashes of Hill and Jochen Rindt at the 1969 Spanish Grand Prix. A crash at the 1969 United States Grand Prix at Watkins Glen broke both his legs and interrupted his career. Typically, when asked soon after the crash if he wanted to pass on a message to his wife, Hill replied "Just tell her that I won't be dancing for two weeks."[6]

Upon recovery Hill continued to race in F1 for several more years, but never again with the same level of success. Colin Chapman, believing Hill was a spent force, placed him in Rob Walker's team for 1970, sweetening the deal with one of the brand-new Lotus 72 cars. Although Hill scored points in 1970 he started the season far from fully fit and the 72 was not fully developed until late in the season. Hill moved to Brabham for 1971-2; his last win in Formula One was in the non-Championship International Trophy at Silverstone in 1971 with the "lobster claw" Brabham. The team was in flux after the retirements of Sir Jack Brabham and then Ron Tauranac's sale to Bernie Ecclestone; Hill did not settle there. 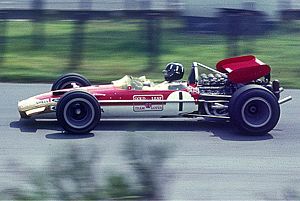 Hill At the 1969 German Grand Prix

Hill was known during the latter part of his career for his wit and became a popular personality - he was a regular guest on television and wrote a notably frank and witty autobiography, Life at the Limit,[7] when recovering from his 1969 accident. Hill was also irreverently immortalized on a Monty Python episode ("It's the Arts (or: Intermission)" sketch called "Historical Impersonations"), in which a Gumby appears asking to "see John the Baptist's impersonation of Graham Hill." The head of St. John the Baptist appears (with a stuck-on moustache in Hill's style) on a silver platter, which runs around the floor making putt-putt noises of a race car engine. 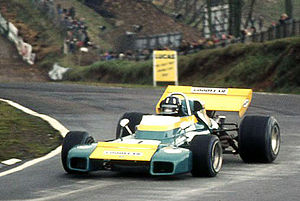 Hill at the 1971 Race of Champions

Hill was involved with four films between 1966 and 1974, including appearances in Grand Prix and Caravan to Vaccarès, in which he appeared as a helicopter pilot.[8]

Although Hill had concentrated on F1 he also maintained a presence in sports car racing throughout his career (including two runs in the Rover-BRM gas turbine car at Le Mans). As his F1 career drew to a close he became part of the Matra sports car team, taking a victory in the 1972 24 Hours of Le Mans with Henri Pescarolo. This victory completed the so-called Triple Crown of motorsport which is alternatively defined as winning either:

Using either definition, Hill is still the only person ever to have accomplished this feat.

With works drives becoming hard to find, Hill set up his own team in 1973: Embassy Hill with sponsorship from Imperial Tobacco. The team used chassis from Shadow and Lola before evolving the Lola into its own design in 1975. After failing to qualify for the 1975 Monaco Grand Prix, where he had won five times, Hill retired from driving to concentrate on running the team and supporting his protege Tony Brise.

Hill's record of 176 Grand Prix starts remained in place for over a decade until being equalled by Jacques Laffite.

Hill married Bette in 1955. Because Hill had spent all his money on his racing career, Bette paid for the wedding. They had two daughters, Brigitte and Samantha, and a son, Damon, who himself later became Formula One World Champion—the only son of a former world champion to emulate his father.

Before taking up motor racing, Hill spent several years actively involved in rowing. Initially, he rowed at Southsea Rowing Club, while stationed in Portsmouth with the Royal Navy and at Auriol Rowing Club in Hammersmith. He met Bette at a Boxing Day party at Auriol and, while courting her, he also coached her clubmates at Stuart Ladies' Rowing Club on the River Lea.

In 1952 he joined London Rowing Club, then as now one of the largest and most successful clubs in Great Britain. From 1952 to 1954, Hill rowed in twenty finals with London, usually as stroke of the crew, eight of which resulted in wins. He also stroked the London eight in the highly prestigious Grand Challenge Cup at Henley Royal Regatta, losing a semi-final to Union Sportif Metropolitaine des Transports, France by a length.

Through his racing career he continued to support rowing and London. In 1968 when the club began a financial appeal to modernise its clubhouse, Hill launched proceedings by driving an old Morris Oxford, which had been obtained for £5, head-on into a boundary wall. Hill made three runs to reduce the wall to rubble, and the car was subsequently sold for £15.

Hill felt that the experience gained in rowing helped him in his motor-racing. He wrote in his autobiography:

"I really enjoyed my rowing. It really taught me a lot about myself, and I also think it is a great character-building sport...The self discipline required for rowing and the 'never say die' attitude obviously helped me through the difficult years that lay ahead."

On November 29, 1975 returning from the Paul Ricard circuit, France, Hill was killed when the Piper PA 23-250 Turbo-Aztec that he was piloting (not registered, but displaying its previous cancelled US registration N6645Y) crashed near Arkley golf course in London, while attempting to land at Elstree Airfield at night, in foggy conditions.[15] The crash also resulted in the deaths of team manager Ray Brimble, mechanics Tony Alcock and Terry Richards, up-and-coming driver Tony Brise and designer Andy Smallman; all from the Embassy Hill team.[16] At the time of the accident Hill’s aircraft, originally US-registered, was “unregistered and stateless”. His US pilot certification had expired, as had his FAA instrument rating. His UK Private Pilot’s Licence Instrument Meteorological Conditions rating, which would have permitted him to fly passengers in the visibility that prevailed at the time of the accident, was also out of date and invalid.[15] The Independent stated he was effectively uninsured.[17]

His funeral was at St Albans Abbey, and he is buried at St Botolphs church in Shenley.

After his death, Silverstone village, home to the track of the same name, named a road, Graham Hill, after him[18] and there is a "Graham Hill Road" on The Shires estate in nearby Towcester. Graham Hill Bend at Brands Hatch is also named in his honour. A blue plaque commemorates Hill at 32 Parkside, in Mill Hill, London NW7.[19]

In Bourne, Lincolnshire, where Hill's former team BRM is based, a road called Graham Hill Way is named in his honour.

Hill's easy wit and charm helped him become a television personality, notably on the BBC show Call My Bluff with Patrick Campbell and Frank Muir. For a number of years in the early 1970s he appeared as one half of a double act, with Jackie Stewart, as an insert within the BBC Sports Personality of the Year show.

In 1990, Hill was inducted into the International Motorsports Hall of Fame.