Grainger County is a county located in the U.S. state of Tennessee. As of the 2010 census, the population was 22,657.[1] Its county seat is Rutledge.[2] It is renowned for its tomatoes.

Grainger County was formed from Knox and Hawkins Counties in 1796, the year Tennessee became a state.[4] It is named for Mary Grainger Blount,[5] wife of William Blount. Anderson, Claiborne, Campbell, Hamblen, Hancock, Scott and Union Counties were formed from parts of the original Grainger County.[6]

Like many East Tennessee counties, Grainger County was opposed to secession on the eve of the Civil War. In Tennessee's Ordinance of Secession referendum on June 8, 1861, Grainger Countians rejected secession by a vote of 1,756 to 495.[7] 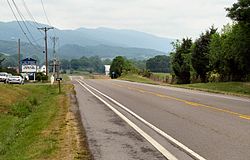 US-11W near Blaine, with Clinch Mountain rising in the distance

According to the U.S. Census Bureau, the county has a total area of 302 square miles (780 km2), of which 281 square miles (730 km2) is land and 22 square miles (57 km2) (7.2%) is water.[8] Grainger County is bounded on the northwest by the Clinch River (impounded by Norris Dam to form Norris Lake) and on the southeast by the Holston River (including Cherokee Lake). Clinch Mountain is a major geographic feature that effectively separates the county into a southern section (including Rutledge) and a northern section (including Washburn).

Indian Cave is an historic site located on the Holston River near present-day Blaine. The cave was used for centuries before Europeans entered the area, as indigenous peoples settled in the area about 1000 CE.[9] Remains of cane torches and other artifacts located in the cave indicate use by prehistoric indigenous peoples.[10] The Iroquoian-speaking Cherokee migrated into the area from the northeast, making the eastern Ohio River valley and Appalachians down into South Carolina their historic territory.[9]

In the 1700s, a Cherokee village was located just west of the main cave entrance, before the people were pushed out by encroaching European-American settlers.[11] The Donelson Party passed the Indian Cave entrance on their way down the Holston River in 1779 to settle present-day Nashville, Tennessee.[11] In the years after the American Revolutionary War, the number of settlers continued to increase in the area. Under the Indian Removal Act of 1830, Congress authorized the president to remove the Indians from the Southeast to territory west of the Mississippi River.[9]

Robert Hoke, a former Confederate general from North Carolina, purchased the cave on July 21, 1869 as one of his business enterprises after the American Civil War. He had it mined for bat guano, a valuable natural fertilizer.[11]

Area businessmen formed the Indian Cave Park Association on January 4, 1916 to develop the cave as a commercial attraction, as was being done for other caves throughout the Great Smoky Mountains. The Association did not open the cave officially to the public until May 30, 1924. The cave is still open to visitors.[11]