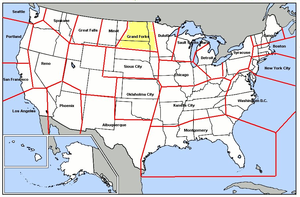 Established in December 1957 assuming control of former ADC Central Air Defense Force units with a mission to provide air defense of most of North Dakota along with western Minnesota and northern South Dakota. The organization provided command and control over several aircraft and radar squadrons.

Consolidated on 1 May 1963 with Minot Air Defense Sector. Inactivated on 1 December 1963 as part of ADC reorganization and consolidation, most units being reassigned to the 29th Air Division.