The Grand Hyatt New York is a hotel located directly east of Grand Central Terminal in Midtown Manhattan, New York City. It was originally built and opened on January 28, 1919 as The Commodore Hotel, but was completely rebuilt and modernized in 1980.

The Commodore Hotel was constructed by The Bowman-Biltmore Hotels group. The structure itself was developed as part of Terminal City, a complex of palatial hotels and offices connected to Grand Central Terminal and all owned by The New York State Realty and Terminal Company a division of The New York Central Railroad.

The Commodore was named after "Commodore" Cornelius Vanderbilt, the founder of The New York Central Railroad System, whose Statue adorns The Grand Central Driveway next door to the hotel to this day. The Commodore was designed by Warren & Wetmore and leased by The New York State Realty and Terminal Company to The Bowman-Biltmore Hotels Corporation of which John McEntee Bowman was President.

The Commodore opened its doors on January 28, 1919. Bowman-Biltmore's own Herbert R. Stone oversaw the decor of its 2000 rooms. The "Most Beautiful Lobby in The World" as it was known was also the single largest room of the day with modern low ceilings and a waterfall designed by John B. Smeraldi. A group of conventioneers once told Bowman that "New York City was like a circus", so the next day Bowman, ever a showman, arranged to place a circus, complete with elephants, in the grand ballroom. Another popular spot was the Century Room, which boasted its own orchestra.

The Commodore shared a parking garage with its sister hotel The New York Biltmore Hotel, Bowman-Biltmore's first hotel investment. Another Terminal City property one block from both The Biltmore and The Commodore is The Roosevelt Hotel, a United Hotel asset which merged with Bowman-Biltmore Corporation on March 4, 1929 which gave them access to all railroad passenger traffic in and out of New York City.

The Commodore was successful for decades and in June 1967 The New York Central Railroad, which by then was running the hotel through a division called Realty Hotels, upgraded The Commodore with a 3.4 million-dollar refurbishment. On May 10, 1972, while John R. Garside was the hotel's General Manager, The Commodore became the first hotel in New York City to show in-room movies through Player Cinema Systems. By the late 1970s, both the railroad line, now called The Penn Central Transportation Company, and the hotel itself, had become less successful. On May 11, 1977, the bankrupt railroad's asset manager Victor Palmieri told the city that the Commodore had lost $1.5 million in 1976 and might have to be shuttered. At that point, the Trump Organization bought The Commodore. 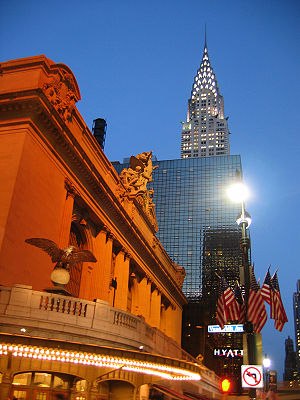 The Grand Hyatt towers over Grand Central Terminal, but is itself overshadowed by the Chrysler Building.

Trump rebuilt the hotel, gutting the first few floors down to their steel frame (although the same basic layout of public rooms was retained) and the entire building was transformed with a new reflective glass facade. The only portion of the hotel's decor left untouched was the foyer to the grand ballroom, with its neoclassical columns and plasterwork. The hotel re-opened in 1980 as the Grand Hyatt New York.

The hotel won the 2007 and 2008 Corporate and Incentive Travel magazine "Award of Excellence".[citation needed] It was renovated in 1996 and again in 2011.