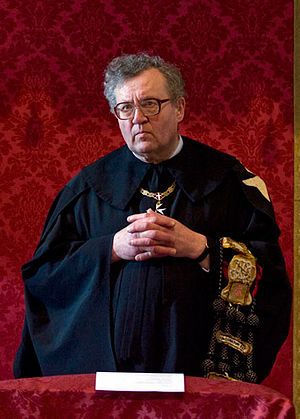 His Most Eminent Highness the 79th Prince and Grand Master Matthew Festing of the Sovereign Military Order of Malta, since 11 March 2008.

Grand Master (Latin: Magister generalis; German: Hochmeister) is a title of the supreme head of various orders, including chivalric orders such as military orders and dynastic orders of knighthood.

In the Sovereign Military Order of Malta, the Grand Master is styled "Sovereign", e.g. Sovereign Grand Master, due to its status as an internationally independent sovereign entity.

As most present-day orders are essentially honorary distinctions - as some always were, e.g. the Order of the Golden Fleece - so are its dignities, which may be held by right of birth or another rank. Thus, a sovereign monarch often holds the title of Grand Master of the highest honorary dynastic orders of knighthood, or by custom awards it to a Prince of the royal family, regularly the heir to the throne, who in other orders may hold another high rank/title.

The title also occures in modern civil fraternal orders such as the Freemasons, the Odd Fellows, and various other fraternities. Additionally, numerous modern self-styled orders attempt to imitate habits of the former bodies.

In medieval military orders such as the Knights Templar or the Livonian Brothers of the Sword, the Grand Master was the formal and executive head of a military and feudal hierarchy, which can be considered a "state within the state", especially in the crusader context lato sensu, notably aimed at the Holy Land or pagan territories in Eastern Europe, as well as the reconquista in the Iberian peninsula.

If an order is granted statehood and thus widely considered sovereign, the Grand Master is also its Head of State. If within the Holy Roman Empire, a Reichsfürst) and Head of Government, and thus a true territorial Prince of the church, as was the case with the Teutonic Knights and the Sovereign Military Order of Malta.

Except the modern continuation of the organisations of medieval foundation, the title of Grand Master has been used by the heads of Grand Lodges of Freemasons since 1717, and by Odd Fellows since the 18th century.

It is also used by various other fraternities, including academic ones associated with universities.

For instance, the national leadership of the Kappa Sigma Fraternity founded at the University of Virginia in the United States, goes by the title "Worthy Grand Master" in lieu of president. [1] With regard to local chapters, the simplified title of "Grand Master" is used in the same substitution.