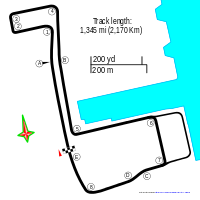 The Grand Prix of Miami refers to an intermittent series of American open wheel races held in South Florida dating back to 1926. AAA held one board track race in 1926, and then the facility was destroyed by a hurricane. The popular CART IndyCar World Series debuted in the Miami area in the mid-1980s with a street circuit at Tamiami Park, then returned to race at Bicentennial Park in 1995.

In 2015, the event will be revived as part of the FIA Formula E Championship. The inaugural Miami ePrix will be held on a new layout adjacent to American Airlines Arena and Museum Park,[1] which incorporates portions of the original Bicentennial Park circuit.

In 1925, Carl Fisher (who built the Indianapolis Motor Speedway in 1909) was developing Miami Beach and envisioned the Miami area as the winter auto racing capital of the world. Fisher built Fulford–Miami Speedway, the world's fastest 1-1/4-mile board track in nearby Fulford. The outstanding features of the track were the 50 degree banked turns, which required a speed of at least 110 miles per hour (180 km/h) to keep the cars from sliding down into the infield.

On February 22, 1926, the first AAA Championship Car race in South Florida took place at the facility. A crowd of 20,000 spectators saw Peter DePaolo win the 300-mile (480-km) race, the first and only major race ever held at the facility.[2]

Later in the year, the track was destroyed by the Great Miami Hurricane of 1926. The site of the oval is now occupied by the Diplomat Presidential Country Club.[citation needed]

Modern American open wheel racing in the Miami area dates back to 1985. In that year, the CART series began racing on a temporary street circuit in Tamiami Park a small outdoor sports facility in the nearby suburb of University Park. The race lasted through 1988, and on two occasions (1987 and 1988) included the CART Marlboro Challenge all star race.

In each of the fourth years it was held, it served as the CART season finale. The inaugural event in 1985 featured a famous championship battle between the father-and-son duo of Al Unser, Sr. and Al Unser, Jr. With Danny Sullivan leading in the waning laps, Unser, Jr. was running third, and for the moment, mathematically was going to clinch the championship points title. His father Al Sr. was charging in 5th place, and needed to move up to 4th in order to clinch the title for himself and Penske Racing. Despite personal misgivings about potentially robbing his own son of a championship, Al Sr. passed 4th place Roberto Moreno with only a handful of laps remaining, and held on to the checkered flag. By finishing 4th, Unser, Sr. beat his son in the championship standings by one point.

Though some subtle remains of the circuit are recognizable as of the early 2010s, a significant portion of the course layout was razed for the construction of FIU Stadium in 1994.

In 1995, race promoter Ralph Sanchez brought open wheel racing back to Miami. In the aftermath of Hurricane Andrew, Sanchez began redeveloping a devastated area of Homestead, Florida, into the Homestead Motorsports Complex. From 1983 to 1994, Sanchez had promoted very successful IMSA and Trans-Am races at Bayfront Park and Bicentennial Park along Biscayne Bay.

For the 1995 event, the circuit was run in the opposite direction (clockwise) as it had previously been contested (counter-clockwise). This was to prevent drivers who had raced there in previous years in IMSA from having an experience advantage. A small kink/chicane was added at the end of the long backstretch (now running northbound) to control speeds. Two of the turns were also widened and slightly re-worked, but that did not significantly alter the layout. The race was won by Jacques Villeneuve, and was the 1995 CART season opener.

Less than three years after the lone CART race in 1995, the layout of the Bicentennial Park racing circuit was partially razed for construction of American Airlines Arena. In the early 2010s, most of the remaining vestiges of the circuit were completely demolished due to the construction of the new Science Museum and Art Museum on the site.

This area was later used for a new circuit, known as the Biscayne Bay Street Circuit. Promoted by Michael Andretti, a 1.3 mile, eight-turn circuit in the area debuted for the 2014–15 Formula E season. In Formula E, the pit lane is used to store cars for the car change that takes place during each race, and the pit lane is away from the start-finish line, close to the pit lane . From Turn 4 to Turn 5 on this circuit the cars will take it out to Biscayne Boulevard, and Turns 5 to 8 (and pit lane) are located very close to the original Bicentennial Park circuit layout. The pit lane is in the same vicinity as the original circuit.

The Homestead–Miami Indy 300 was an IndyCar race held at Homestead-Miami Speedway in Homestead, Florida from 1996 to 2010.

In 1996, after construction was complete at Homestead Motorsports Complex, CART debuted at 1.5-mile oval with a 200-mile (320 km) event. At the time the layout was a flat, rectangular "mini-Indy" configuration. In 1997, the race was lengthened to 225 miles (362 km), and the configuration was reconstructed to be a traditional oval shape. For each of its years through 2000, the race served as the CART series season opener. CART also used the facility as their venue for "spring training" (off-season testing).

On March 26, 2006 driver Paul Dana suffered fatal injuries in the warmup session before the race when he was involved in a high-speed collision with Ed Carpenter at over 215 mph (346 km/h). The race went on as scheduled, but Dana's teammates withdrew from the race.

In 2007–2010, the IndyCar Series race was part of the Speed Jam, a twin-race combo weekend with the Rolex Sports Car Series.

The CART series returned to the Miami area once again in 2002. The Grand Prix Americas was a joint CART/ALMS weekend, which revived a part of the original 1983 Bayfront Park course. A 1.387-mile (2.232 km) circuit utilized park roads and extended onto Biscayne Boulevard and 3rd and 4th Streets. In 2003, the layout was changed to drop the 3rd/4th Street loop and added a section on Biscayne Boulevard along the north end of the park.

The race briefly provided two annual open wheel races in the Miami area. The IRL's race at Homestead was in the spring, while this race was held in the fall.